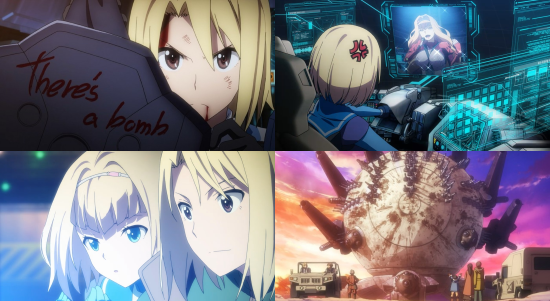 The other week I wandered into the kitchen and my cat, Marco, had proudly deployed something which could have ended modern warfare, if it were weaponised. He was very proud of himself. However, it did make me think as to whether there is anything that would stop us - as a species - from ruthlessly killing one another. As I sit here North Korea are testing weapons of mass destruction, and the relative peace of the world is - perhaps - at a point where a single poor decision could destroy us all, or at the very least disrupt the world economy. The thought of having Heavy Objects, through which warring parties can duke it out, might not be such a bad idea.

At the end of Part 1, the Baby Magnum, and her maintenance crew, had just finished polishing off some guerrillas in the rainforests of South America. It was a spectacular feat of artillery fire and luck. Though now the battlefield has changed again, as the four major world powers make manoeuvres to dominate one another. One after another the Objects of each nation face off, to settle regional disagreements.

Qwenthur and Havia, with the Baby Magnum, first find themselves in the colds of Alaska. The Baby Magnum is still battered after the princess’s last battle in the rainforest, and this time she is up against the chesty and obnoxious “Oh ho ho” girl and her gatling powered Object. As both Objects are battered, it becomes a battle as to who gets their repairs completed first. True to form, from previous battles, Qwenthur finds himself in a precarious situation - inside the enemy Object. Thus begins the key theme of the second half of the series, Artificial Intelligences piloting these massive weapons of destruction. Yes, I know that is a truly awful idea! Thankfully it turns out that these artificial intelligences, at least initially, can’t operate without someone debugging them in real time. This is where Ms Oh Ho Ho comes in, as it turns out that she is a complete lie: Her image on the videos are not only faked (she isn’t 20+, she isn’t the owner of a massive pair of breasts, and she isn’t sexy), but it turns out she is also a singing battle idol.

The series gets more ludicrous, and simultaneously more inventive about how these giant machines are defeated. The more of the little three-episode arcs I watched, the more I realised how ridiculous the whole concept of an Object actually is: One of the nations decided to roll out seven of them to wipe out an immigrant city; and another Object went berserk as mind control took over the person inside. It is becomes obvious that; while they are well armoured, immensely powerful, and destructive weapons; they are as fragile as a glass slipper. I even winced a bit at the physics of a small explosive going off inside an artillery gun barrel, and causing critical damage. That is not how artillery ballistics work.

I think it’s safe to say that my fascination and interest is no longer with these bloody great machines: They are dumb. What I am interested in is witnessing Qwenthur figure out these problems, and being an utterly smug git when he defeats something which cost a country its entire GDP. I also enjoyed watching Milinda’s little pouty moments, and her growing realisation that she is actually a human, and really wants to have her filthy way with someone. But, let’s be honest, the true star of the show is Commander Frolaytia Capistrano. Damn. I love that woman.

At this point I don’t have a great deal more to say, and anything I do say will essentially be a spoiler. Heavy Object has maintained excellent voice acting in the English dub. Similarly it is still animated really well, with the CG blending in with the more traditional animation almost seamlessly. Though in the later episodes some corners have been cut, at least with regards to the animation of the plasma explosions.

After watching both series of Heavy Object I don’t think that this is going to win any awards. In all, while each episode arc shows new and unique ways of defeating the enemy, I secretly think to myself that the world might be better if they decided just to use a Robot Wars style battle arena to resolve their differences. That being said, considering that the series tries at times to be intelligent, Heavy Object is really just a bit of brainless entertainment. I certainly found it entertaining, but not particularly memorable.

6
Certainly entertaining, but no longer immovable.