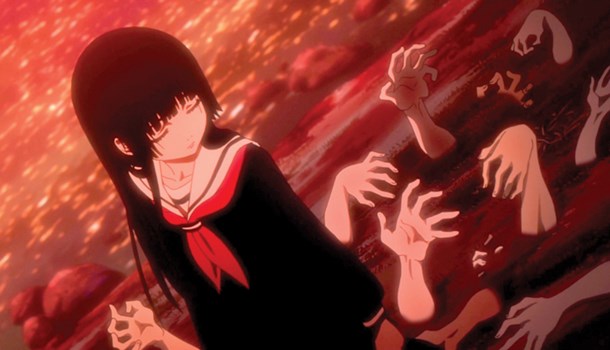 Everything has a price, especially revenge. If you desire revenge on a person, then a price will have to be paid.
There is a website that can only be accessed at the stroke of midnight. Rumour has it that if you post the name of the person who has done you an injustice then they will disappear forever to suffer an eternity in the fiery depths of the underworld. Of course, no one believes this! It’s just an urban myth...

So what actually happens to those who are entered into this website of “Hell Correspondence”? To begin with, they die. Once the covenant is made with the oarsperson of the River Styx they are ferried through the gates of hell and will remain in torment for eternity... lovely. Only one problem with the whole revenge thing, the covenant demands that an equal price be paid. A soul for a soul, both held in hell for an eternity.

The Hell Correspondence website links into an archaic computer based inside a tiny country house in rural Japan. In the house, Ai lives with her grandmother and with three mystical straw dolls. As you have probably guessed by now, Ai is the oarsperson of those souls who are now destined for the very depths of hell. She is, as the description suggests, Hell Girl (and bears absolutely no relation to the red fisted Hell Boy of comic book fame).

Let me get right to the point here. Hell Girl is not what you expect. My initial expectations was for something along the lines of Kino’s Journey; Episodic and yet distantly associated scenarios and situations. Hell Girl provides insights into the lives of the tortured, to those poor souls trapped in a living hell. To them, the choice is simple; temporary release from their torture and punishment for those who have wronged you, or continuing to live your life knowing that the person causing all this may just get away with these deeds. Watching these people make the decision over and over again makes me despair a little and that, of course, is half the point.

The other side of the series is a glimpse into Ai’s life. Here is a very young girl, living in peace with her enigmatic grandmother, eternally forced to spend her youth ferrying the souls of the damned through the gates of Hell. What could she or her family have done to deserve this? I can foresee this aspect of the series and character development to deepen considerably as the series continues.

The series and the dub are both excellently produced. The English actors have put in a lot of effort to convey the true emotion behind their characters, with Ai being so scarily devoid of emotion it sends a chill down my spine. Pay close attention to Ai’s kimono when she ferry’s the souls to the gates of Hell. I have never seen anything like it, almost hypnotic.

The series is a collection of short stories so far. Each episode involves a completely different set of characters and the stories of woe are extremely diverse. It won’t be for everyone, but I definitely feel that it's worth trying out. Grab yourself volume 1, pour a nice cold beer, and prepare your mind for some truly diverse viewing.
8
Different, yet oddly compelling.