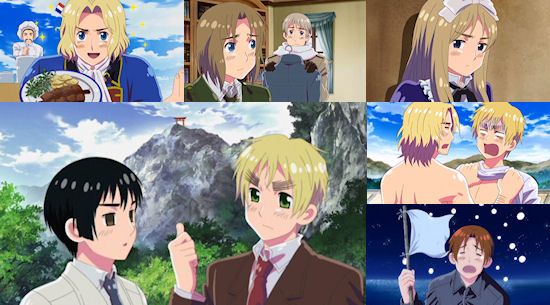 Despite a delay of a couple of months to its UK DVD release, Studio DEEN's anime adaptation of Hetalia: Axis Powers continues its march to our shores via this second complete season, bringing with it another burst of twenty-six short episodes imagining what life would be like if all of the countries of the world were anthropomorphisised as (mostly) good-looking men.

It's difficult to know what to say about this series that we haven't already covered in our review of series one, as these episodes are very much a case of "as you were" whether you're considering either the original Japanese language version or FUNimation Entertainment's significantly altered English dub.  In the case of the former, Hetalia remains a blend of light-hearted comedy and poking harmless fun at national stereotypes (including those aimed at Japan itself), while the latter takes a more biting approach that has no concerns about depicting Americans (or even anime fans) as being dumb and generally unaware of history.

Although the English dub and its close to the knuckle script does grab a couple of big laughs that are sorely lacking from the original Japanese version, it doesn't really cover up the fact that the wider dub as a whole is occasionally cringe-worthy to watch between its hammy character accents, left-field characterisations and some genuinely tasteless jokes - Gulags and the holocaust both feature, with one joke in particular seeming to suggest in the context of its use that the holocaust didn't actually happen; not a road I'd wish to traverse in the name of comedy personally.

Throw in some additional political jokes that were never present in the original Japanese release and you have yourself a very different product from the original Hetalia if your normal preference is to use the English dub - thankfully, the Japanese language track with English subtitles is unmolested and thus offers a far gentler and more sedate series of events - not that this gives it any more potential in terms of its humour.  On this note, it's perhaps worth noting that we had issues with English subtitles "flickering" on and off when multiple translations were on screen with our review disc for the series - however, this release has been delayed due to mastering issues, so fingers crossed this slightly annoying issue has been resolved on final retail DVDs.

Perhaps more important than the content of Hetalia: Axis Powers is its character roster, with much of the franchise's popularity built upon the looks and mannerisms of those characters - to this end, series two does introduce some more countries to that roster, including a couple of additional female characters in the Ukraine (complete with comedy noisy bouncing boobs) and Belarus.  I'd imagine it'll be these additions that interest Hetalia fans more than this second season's increase in historical content and commentary, which is what makes reviewing this series such a difficult proposition - in essence, the cynic in me suggests that it doesn't matter what the show does as long as it has fun and suitably attractive characters within it, comedy or story-telling be damned.

If you're an existing fan of Hetalia via its first season, then you've probably already made your mind up about this second series - indeed, if you enjoyed series one then there's no reason to expect you to be anything other than equally satisfied with this second batch of episodes.  Outside of its existing fan base however there isn't really anything to make Hetalia: Axis Powers stand out from the crowd aside from its character designs, and its English dub still leaves me feeling uncomfortable at times in both execution and content - it's a decidedly average comedy series at best, so don't expect it to appeal outside of its particular niche within anime fandom.

English 5.1 and Japanese 2.0 audio with English subtitles.  This single disc release also plays host to plenty of extras - as well as text-free ending credits and the Hetalia movie announcement trailer, there are also commentaries for episodes 31, 36, 42 and 46 featuring a variety of US dub voice actors.  Also on the disc is footage of original series director Bob Shirahate in discussion with the Japanese voice actors for Prussia, Italy and Chibitalia).

5
A mediocre comedy series with an English dub that tries too hard to be edgy, but it'll still appeal to fans of the franchise regardless.
COMMENT AND DISCUSS
blog comments powered by Disqus