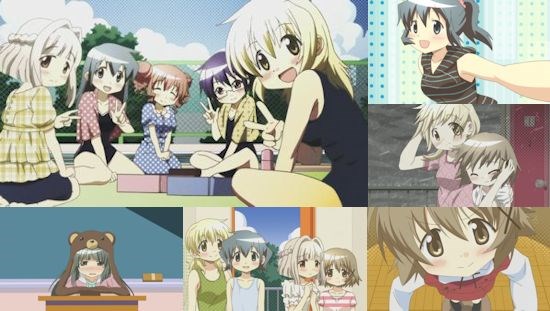 I have not made a secret of my love of the previous seasons of Hidamari Sketch, nor my surprise that the show has been picked up for UK streaming by Anime on Demand. Can a show now in it’s fourth season attract a new audience? Can it maintain the same charm it has displayed in previous outings? Will I stop asking questions and actually get on with the review?

Hidamari Sketch follows the day-to-day non-adventures of the residents of Hidamari Apartments, all of whom attend Yamibuki High School which is literally just across the road from them, and is famed for its separate arts curriculum. There are no special powers or secret agendas in the show - all of the stories presented are short glimpses into the characters various down-to-earth lives as they attend school, go on holiday, or spend their free time. Probably the most stressful thing out of these first five episodes so far is when one of the younger cast members, Nazuna, comes begging for advice on how to make dinner for her parents as she is a bad cook and has lied to cover this up. If you are looking for grand, sweeping narratives then you will likely want to look elsewhere.

This isn’t to say the show is dull. There is something wholesome and refreshing about the show as it presents itself - the events portrayed are utterly mundane (hanging out with friends, going to school, making dinner, visiting family) but are pulled off with just the right degree of gravity to help you empathise with the cast. They are not the dumb, listless bricks you may find in other “gaggle of girls” shows - each has their own driving goals and concerns that permeate their daily lives, and are certainly not there simply to mug for the camera and make viewers fall in love with them. This is certainly helped by the stellar voice work honed over the previous seasons - the voice actresses really make the performances their own and give the characters an extra dimension.

While some of events can be somewhat saccharine, it still retains a definite charm due to the strong focus on the characters, their relationships and their personal development. The show has a definite advantage in using an advancing timeline - every episode is tied to a certain calendar date and uses this to display a definite sense of growth in the cast as the season continues. This is especially laudable as the series is adapted from a four-panel comedy manga, and manages to set its own pace to events rather than simply churning through the gags one after another.

Probably one of the more unique aspects of the show, and one that is frequently mentioned by fans and detractors alike, is the audio-visual flair that it brings to its antics. The show uses a wide range of different tools to spice up the (lack of) action taking place and giving it texture and life. These little touches really help to elevate the mundane and rather slow paced antics of the cast and give them the life they need to make them engaging on a moment to moment basis. Little chalk outlines of a character's footsteps when they cross the floor; the loud snap of a lightswitch when someone walks into a darkened room; interesting visual and colour-bending filters over extreme closeups or interestingly framed shots with a translucent item of foreground furniture - just a few out of many fleeting moments of individual creativity that make the whole enjoyable to watch but which don’t outstay their welcome.

Building on three previous seasons, Hidamari Sketch now has a pretty well developed toolbox of tricks to use that it draws upon for the various little creative touches it uses. Veterans will find themselves surrounded with familiar moments, like the pre-episode countdown reel which it would now be almost blasphemous to take out. This isn’t to say the show rests on its laurels - each episode has its own palette of interesting moments, although the effectiveness and frequency of each one can vary wildly. One thing it does bring to the show is a sense of deliberateness - each scene and frame has thought put into it and while not every sequence will blow your retina off it never truly feels like it is in “auto-pilot” or just coasting along. There are a few caveats to this of course - the first episode of the season feels lost in itself due to a lack of focus, and this season has noticeably more fan sevice than prior outings. While it is still extremely tame in the grand scheme of things, this feels very jarring and out of the ordinary, and thankfully quickly passes.

Despite having three previous seasons, this new season is fine for newbies to jump into. As mentioned before there is no grand over-arching narrative, other than “we go to an arts school!” which can be picked up immediately. The characters wear their hearts on their sleeves, which is one of the reasons why they are so endearing, so you don’t really need to worry about extended introductions. There may be one or two characters or events that get referenced as an aside who you will not have met, but these can be safely ignored. One of the benefits of the artistic sensibility displayed by the show is it’s way of filling in background information during a conversation, and so cracks in knowledge for those new to the show are papered over in this method with quick visual asides.

Above all else, a lot of the gags are just plain funny unless you have a heart of stone. I could throw out a number of examples but half the joy is in the discovery and the presentation so i’ll refrain. In general the show won’t make you choke laughing but will give you that particular warm fuzzy feeling while you giggle along to what plays out on screen; doubly so if you have a form of alcoholic beverage to hand, which seems to be the way the majority of established fans watch the show.

Hidamari Sketch x Honeycomb manages to pull off exactly what you want from a continuation. It brings new elements and tales to the table and manages to not break what it already had set up. The show exhibits no signs of decline, and if anything manages to come into it’s own using the new cast members that were introduced in the last season, fleshing out characters and their interrelations with a certain degree of charm. It still isn’t anything groundbreaking or world-changing, but it’s still a damn good show to watch in the evening with a beer in your hand.

You can currently watch Hidamari Sketch x Honeycomb in streaming form via Anime on Demand.

8
Not for everyone, but if you are looking for some heartwarming non-adventures you’ll find none finer.
LATEST REVIEWS