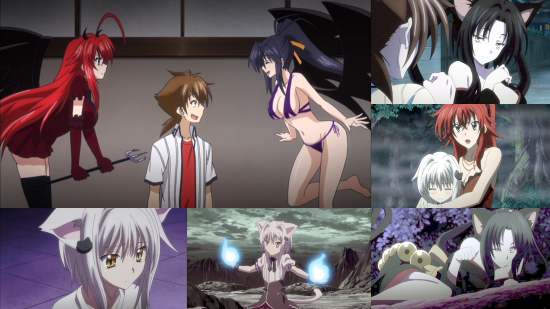 I have a secret. It’s a bit of a dirty secret, but I’ll tell you if you can keep it for me.

I secretly watch High School DxD at the gym. I watch it regardless of those around me and I don’t feel any shame. Well, nothing like the shame I felt watching Valkyrie Drive earlier in the year, anyway... that was like daggers piercing my soul, but I digress. The reason why I am admitting this most heinous of crimes is that, to those not in the know, High School DxD is extremely perverted, but in the best kind of way.

Issei has a dream. He dreams of big fat tats, luscious legs on beautiful girls, and wants nothing more than to have power so that he can have a harem of his own like the princes of old. This singular perverted agenda is his key driver in life, but he is such an utterly pathetic man that his first girlfriend turns out to be a fallen angel who slaughters him in cold blood. He is rescued, after accepting a demonic contract, by Rias Gemory, the demonic sister of the current ruler of hell. Through this contract Issei not only becomes a demon, but is also brought into servitude within the Gremory family which comes with certain... benefits. Firstly, he now has access to Rias, whose beauty is only matched by the magical Akeno, Rias’s second in command and her most powerful servant.

Not to be sated with these two beauties, Issei and Rias recruit Koneko, who is a cat-monster (see below), Asia who is a former church servant, Xenovia a former church warrior, and Rossweisse who is a Valkyrie from the Norse Mythos. I don’t include Gasper in this roster as I have no idea what the hell he is doing sometimes.

Slowly but surely Issei, through some unknown magnetism and charisma, manages to get in with each and every one of these lovely girls as Rias and her entourage battle the various forces trying to destabilise the worlds of demons, humans, angels, and other mythological realms.

High School DxD BoRN follows on from the second series, which has unfortunately as of writing not been made available in the UK. This series covers the events within the light novels up to around volume seven (out of 17!) and at this stage not only is Rias’s servant roster fully founded and all her chess pieces taken, but most of the central character development and introduction is also completed.

BoRN covers three distinct events of note. Firstly, Koneko’s backstory. For those not in the know, Koneko, as her name suggests, is a cat monster and - frustrated by her lack of strength and power due to her continued suppression of her cat form and power - she finally tries to resolve this troubled history and the relationship with her sister thanks to Issei. Catgirl Koneko is the best Koneko.

The second major event revolves around the Chaos Squad. If you've seen the series you might remember these guys from the second series during the dragon battles, only now they have recruited Koneko’s sister and the Norse God Loki, who single handedly tries to destroy the world as only Loki can, and it’s up to Rias to stop him.

The third major turning point in the series revolves around the peace treaty between the various realms which Rias’s brother is involved with. Predictably, demonic politics takes over these talks and another family attacks the talks and is unveiled to be the ring leader for all of the bad events of the last two series. Who didn’t see a controlling evil mastermind coming? He would have gotten away with it too, if it wasn’t for those damn kids.

I could go on about the little relationship battles which happen, but frankly it’s worth seeing it for yourself. Rias gets very very jealous, and boy is it cute.

High School DxD sports one of my all-time favourite dubs. There, I said it. The first series’ acting was full of innuendo, puns and filthy humour combined with a stellar performance from the cast who clearly sounded like they were having fun. Or they were high. That’s neither here nor there. What is important is that, at least in my opinion, this English dub is far superior to the Japanese and yes, I have watched both. I await the debate.

As with the first series' Blu-ray release, BoRN is also uncensored and improved from the original broadcast. This means that your goggles can enjoy the bouncy greatness that are Akeno’s funbags. How this show gets by with its low age rating, I’ll never know. But, to be fair, it is rather softcore, at least compared to other things I've reviewed.

To summarise if you, like me, have a proclivity for lewd harem comedies intertwined with casual nudity and tits-a-plenty, then just dive right onto the DxD train. If you are lucky, you will appreciate the plot and story in-between the innuendo and the cute girls. If you want a more intellectual show, then maybe this isn’t the series for you. To be fair, judging from the looks I get in the gym High School DxD isn’t the show for a lot of people, but damn do I love it.

Oh, and as a nice bonus, the Blu-ray comes with the six small OVA episodes. These episodes are perhaps a bit saucier than the actual series and very funny. Well worth spending another 20 minutes to enjoy them after.

7
More High School DxD is never a bad thing in our book.