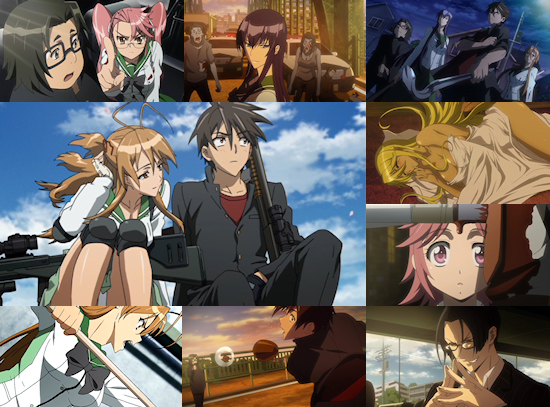 High School of the Dead

Takashi Komuro is not enjoying his life - dumped by his childhood friend for another guy and feeling decidedly inadequate because of it, surely things can't get any worse for him?  Enter a quickly-escalating, global zombie apocalypse to make him wish for the days when the worst of his problems was how to handle his love life.

While the core elements of some anime plot synopses can take up several paragraphs to be adequately explained, we certainly have no such concerns with this Madhouse-produced anime adaptation of High School of Dead - there's a worldwide zombie outbreak and we follow a group of survivors in the aftermath of this event as the world is turned upside down.  It really is that simple.

Thankfully, High School of the Dead proves itself to be far more than a case of "all talk and no trousers" - right from the off, we find ourselves assaulted with a feast of panty shots, bouncing boobs, splattering blood and crunching skulls as no time is wasted in kicking off the invasion and rapid growth of "Them" (as the series likes to call its zombies).  As its characters gather (and extras are quickly pruned off), so we move from school to streets in a near constant barrage of action, pausing only to ponder the scale of the unfolding disaster or (more frequently) gaze upon the wonders of the female form.

Although some Hollywood and televised takes on the survival horror genre have tried to do something different with the whole zombie apocalypse concept, High School of the Dead is instead quite happy to walk a tried and trusted route, to the point where it actively apes and pays homage to classic works of zombie fiction right the way through to Shaun of the Dead - even musically, the soundtrack to the series gleefully nods towards the likes of 28 Days Later as it goes about its grisly, sexy business.  This almost loving attention towards its inspirations is only surpassed by the show's even greater desire to imbue the series with real-world detail in the weaponry exhibited throughout, which does add an extra thrill to proceedings however outlandish its core concept may be.

Incredibly, despite throwing its female characters into skimpy outfits and making them bounce around, the series rarely feels exploitative in its actions - aside from some obvious exceptions (a bath scene and the climax to an anime-original episode revolving around Takashi and Saeko), much of the fan service is achieved organically as part of the on-going action, which makes it all seem okay.  It is okay to enjoy fan service as long as there's a good reason for it, right?  I mean, it's perfectly natural for a girl to fight zombies wearing only an apron and a thong while standing on top of a vehicle as far as I'm concerned...

Okay, so maybe it is exploitative, but it's hard to worry too much about such things when your senses are being assaulted with one of the show's frequent, fantastic set pieces coupled against an awesome soundtrack - its moments like this when your breath catches in your mouth, your brain disengages and your jaw sags to enjoy what can only be described as the year's blockbuster anime spectacle.  There are moments within the series which take a political jab in a given direction, but these are few and far between and do nothing to spoil the simple pleasures of watching a group of strong characters (in both mind and body) fighting for their lives and bouncing off one another emotionally and romantically.  It's certainly not highbrow stuff, and at times its stunts and scrapes are outright ridiculous, but who cares when it's so entertaining to watch?

While High School of the Dead's animation quality can be pretty variable, it rarely detracts from what's going on and when it comes to its most important moments it never falters, and both Japanese and English dubs are excellent (the latter particularly so in a world where I rarely outright praise an English dub).  Technically, High School of the Dead undoubtedly looks its best on Blu-Ray, but its DVD release also looks the part with a solid transfer and only the occasional minor error in its subtitles to speak of.

If you're an anime fan who also loves survival horror, then it probably goes without saying that you'll lap up High School of Dead as you pick apart its nods and references to other creations within the genre.  Beyond that, this series is a rip-roaring, action and gore-stained effort that somehow manages to combine boobs and blood and remain thoroughly enjoyable throughout.  It's big, bombastic, in your face animated action that doesn't care how absurd it gets - and we love it all the more for its "take no prisoners" attitude.  If you want some vacuous, overblown fun from your anime this year, nobody will provide it more readily than High School of the Dead.

English 5.1, Japanese 2.0 audio with English subtitles.  Extras consist of textless opening credits, and a set of textless ending credits for each episode (each of which features a unique song to close out the instalment).

9
A big, brash and ridiculous series, High School of the Dead is nonetheless hugely entertaining. Put simply, it's the anime blockbuster of the year.
COMMENT AND DISCUSS
blog comments powered by Disqus