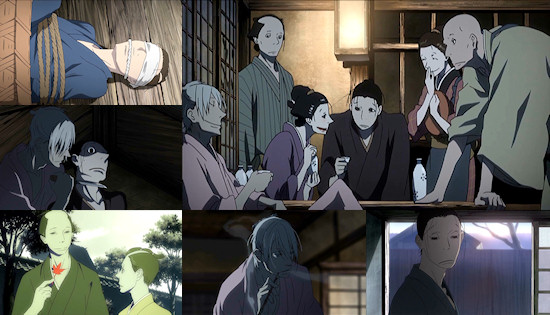 Mention the words "samurai anime" to most fans and they'll instantly assume that the series under discussion is filled with sprawling, hectic, spectacular and bloody sword fights and sullen, dedicated warriors duking it out for honour or in the service of their bosses.  It's probably a fair assumption too, as everything from Ninja Scroll to Sword of the Stranger via Samurai Champloo has made heavy use of these elements.

However, if you're intending to pick up House of Five Leaves under these assumptions, then you might want to pause for a moment, for although this series is produced by Manglobe (responsible for the aforementioned and superb Samurai Shamploo) it couldn't be more different than your typical Edo-era samurai fare.

After a brief introduction to the troubled childhood of a boy named Seinoshin - adopted into his family, detested by his mother and ultimately removed forcibly from his home under the pretence of a kidnapping - our focus turns to a samurai named Masa Akitsu.  Rather than the ultra-confident, belligerent ronin you might be used to, Masa cuts a rather unlikely samurai on account of his forthright yet shy, quiet demeanour.  Given that he's averse to making eye contact with anyone let alone fighting with them, Masa struggles to hold down a job, whether it's deploying his skills as a samurai by working as a bodyguard or taking on more straightforward physical labour when money becomes tight.

It's at this point that Masa runs into someone who couldn't be any more different than himself - the charismatic yet guarded Yaichi.  It soon becomes clear that Yaichi isn't exactly living within the confines of the law as he plans and executes kidnappings to extort money from his victims' families, although it seems that these crimes are largely targeted against those who arguably deserve it, leading Masa to wonder if his new-found friend is something of a "chivalrous robber".

Throughout the series, Masa's curiosity draws him closer and closer into the group of kidnappers - the so-called Five Leaves of the show's title - as he finds himself ever more inextricably involved with both the individuals within the group and their crimes.  All Masa wants is a simple, decent and legitimate life and career, but can that possibly mesh with his intrigue towards Yaichi and company?

As I think we've already made clear, House of Five Leaves isn't the series for those looking for intense samurai action - indeed, the show only really features a couple of outright action scenes, both of which are little more than brief demonstrations of Masa's ability and dedication when push comes to shove.  That leaves the rest of the series to serve as a slow, deliberate study of its characters as it also progresses its story, most notably as it pertains to the ever-mysterious Yaichi as his past comes back to haunt him, revealing in turn the truth of his identity and life story thus far.

Indeed, its ghosts of the past which hang heavy over the entire series - all of the Five Leaves members have their reasons for turning to a life of crime and all of which seem perfectly understandable.  This means that no matter what crimes they commit, it's hard not to find yourself cheering the Five Leaves on somewhat, particularly given that even their crimes are mostly committed with good reason beyond merely earning money.

Given its initial broadcast slot on Fuji Television's noitaminA programming block, it isn't too surprising to find that this is an anime series with a decidedly unique look and atmosphere, with visuals that closely ape those of Natsume Ono's original manga and a vibe which almost defies description using the written word alone.  House of Five Leaves is, at its core, a sedate show that makes sure that it spends time on its characters and there circumstances, yet this belies a constant and occasionally quite fast pacing to its story that slips by almost unnoticed - in the first episode alone we're fed an incredible amount of information and plot progression, yet it all feels so natural and "smooth" that it's quite a shock when you realise how much you've just taken in!  There are admittedly occasions when this need to fit so much into so little time does make itself obvious, with episodes occasionally jumping around from one scene or flashback to the next, but thankfully these are very few and far between and so never become overly disruptive.

In terms of Beez Entertainment's treatment of the series, we can have no real complaints - the box art and packaging is absolutely gorgeous, with a sense of style that seeps right through to the menu screens of the three DVDs within.  The release itself is subtitle-only with no English dub available, but those subtitles are solid and the video and audio quality is good for the most part.  The only slight mark against the release is the use of PAL speed-up upon the video in its conversion from NTSC, but on this occasion it's only really noticeable in the opening credits and doesn't upset the episodes themselves.

Overall, the simplest description I can find for House of Five Leaves is that it's "very different".  This isn't a series about samurai, or even about its particular time period and setting - instead, these are merely the vehicle which delivers an utterly character-centric series.  Ultimately this is a story about how circumstances and a person's past can drive their present, and thankfully it does this via some carefully crafted story-telling and compelling characters that all manage to find a place in your heart despite (or perhaps because of) their particular flaws and foibles.  It might not cater to those who want a "quick fix" of entertainment, but if you're happy to take your time with a series and let it woo and seduce you with its particular charm and ability over the course of twelve episodes, this is a beautiful and considered little gem.

8
This isn't your typical samurai anime - action and bloodshed are replaced with character-driven story-telling to great effect.
COMMENT AND DISCUSS
blog comments powered by Disqus