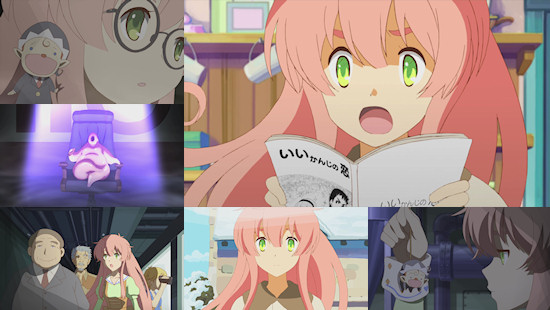 You know how people are always telling you never to judge a book by its cover?  Well, chances are they were thinking about new streaming anime series for the summer, Humanity Has Declined, when they made that proclamation.

At first glance, everything about this series (with the possible exception of its title) is cutesy and sweet.  Hey look, there are fairies!  They're dancing with the show's cute female protagonist in the opening credits!  Look, look, they're even eating chocolate and living in tiny little boxes, how can this show be anything but warm, fuzzy and adorable?

Yes, this series does indeed feature rather cute little fairies, and our otherwise nameless protagonist does seem to be quite a sweetheart at first, but once we start to dig into this show's plot even its core concept isn't exactly what you'd call "adorable".  In short, and as the show's title alludes to, the world we're introduced to here is one in which mankind's population is dwindling, with illness and disease further reducing both the population and available food supplies markedly.  On top of all this, those sugar-addicted fairies need to be kept appraised of what is going on in the world, which is where we come in as we follow a UN liaison between the worlds of humans and fairies.

Over the course of these opening episodes of the series, we run into a couple of problems which need both a practical and diplomatic solution, whether it's the appearance seemingly from nowhere of abundant foodstuffs or a cultural restoration activity that turns into a full-blown manga boom.

Despite its view of a down-trodden future world with a declining populace, the true focus of Humanity Has Declined is very much on the present, and its here that the series unveils its trump card - an absolutely fantastic line in cynical, world-weary humour.  Despite her sweet exterior, our pink-haired protagonist knows exactly how the world works and what she has to do to get by, leading to her lamenting long and pointless meetings via an inner monologue while keeping her mouth shut or hiding her inner despair at being assigned a pointless task with a burst of outward enthusiasm.  In other words she's just another office work looking to earn her keep, and as such she serves as a perfect and recognisable symbol for the modern-day salaryman (or woman, of course).

While our main character's internal monologues and complaints offer plenty of comedy in itself, the world in which she lives is where the real hilarity comes into play - the planet we're introduced to here is ravaged not just by disease and starvation, but more directly by bureaucracy, positive reinforcement and progress by committee.  At times it's a damning indictment of modern life, and the fact that the targets of its lampooning are so obvious and worthy of scorn only serve to make it more delicious.

Finally, Humanity Has Declined isn't beyond leveraging its world in the name of offering parody and surreal humour, bringing us such bizarre sights as bleeding bread and talking skinned chickens, the latter of which are sent scattering in the midst of a John Woo gunfight parody, Ave Maria in the background and all.  All of this is delivered via perhaps the show's weakest component - an art style which admittedly makes the shock of seeing it bring forth so much biting satire seem greater, but perhaps not enough so to avoid the fact that it still looks a bit naff with its overly washed out palette and generally wishy-washy aesthetic.

You shouldn't let this jarring art style put you off however - if nothing else, the opening episode of Humanity Has Declined is possibly one of the best things we've seen this year by quite some distance.  Once you get over the initial shock of what the series is delivering compared to what you might expect of it, the impact of this mind-blowing satire dies down a little, but you're still left with a wonderfully cynical piece of writing that is decidedly rare in the realms of modern anime comedy.  It might not be able to live with our now-lofty expectations for the remainder of the series, but thus far Humanity Has Declined is a hidden gem that you'd be well-advised to dig up and enjoy.

You can currently watch Humanity Has Declined in streaming form right here at UK Anime Network!

8
Beneath its cute and colourful demeanour hides the heart of a cold, abject cynicism - and we utterly love it.
COMMENT AND DISCUSS
blog comments powered by Disqus