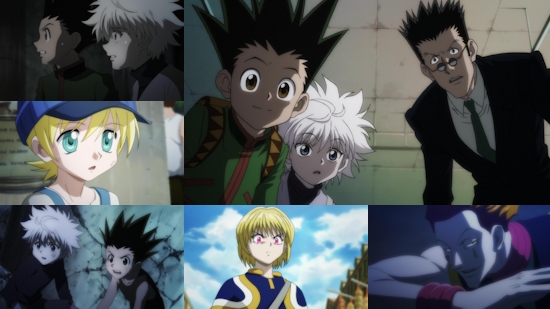 When it comes to anime movies based on shounen properties, I imagine most of you will know what to expect - a story that stands apart from any on-going TV series in broad terms, most likely with some original characters who you know won't stick around beyond the duration of the film, and a boost in budget to bring viewers at least a few impressive, high stakes action scenes. In fact, I think we might have just written my review of this Hunter x Hunter movie in a single paragraph. What's that, you want us to write more? Okay, here goes...

Although it purports to be enjoyable as an entirely standalone film, Phantom Rouge begins with a reasonably brief outline of the story of the series (which was rebooted in animated form in 2011) thus far, introducing its main characters and their basic motivations in a way which might not click all that easily unless you've seen at least a little of the series previously. With that done, we jump straight into the thick of things, and a rather unfortunate fate for Kurapika - someone has nicked his eyes, the kind of thing that you don't even hear of happening in Glasgow on a rowdy Saturday night.

The particularly harrowing part of this event for Kurapika himself is that the culprit was none other than an old friend of his named Piro, although it quickly becomes clear that the real mastermind behind this bit of thievery is somebody else entirely. Surprisingly, this information comes from none other than Hisoka, who has put a halt to his own evil ways to help out our "unripe" band of hunters recover Kurapika's vision.

Meanwhile, Gon and Killua are also attempting to hunt down the perpetrator of this crime - a hunt which brings them into contact with a young puppeteer named Retsu. This particular encounter ties into another of the recurring themes of the movie, this being Killua's constant worries about his friendship with Gon and the jeopardies of this relationship for both of them. As a result, Killua is decidedly uneasy about Retsu's offers to help in their hunt for the location where they believe Kurapika's real assailant is hiding - but is there more to Killua's concern than mere jealousy? Naturally, all of this leads us to a final massive showdown with another familiar face, featuring plenty of the main cast in a single epic battle to both defeat the enemy and for some of the individuals involved to reconcile their emotions regarding prior events.

All of this amounts to a film that should be enjoyable for existing Hunter x Hunter fans - all of the main characters get a decent amount of screen time and opportunities to affect proceedings, the action is slick whenever it appears and although the comedy doesn't feel as sharp as it does within the TV series it can still provide some mildly amusing turns here and there. Phantom Rouge also does at least go to the trouble of tying itself into the story of the wider series to a decent degree - rather than simply serving up a trifle, everything here is intrinsically linked into the main cast's goals and situation, which gives it a feeling of weight that is missing in other shounen movies.

Where this film might disappoint a little is visually - this Madhouse production isn't bad, and it brings the goods when the action kicks in, but as a whole the movie lacks the sheen we tend to associate with theatrical productions and feels more like some TV episodes thrown onto the big screen without being afforded any extra care or animation budget.

For those with no prior experience of Hunter x Hunter, Phantom Rouge really isn't a great starting point. Standalone it may be in one sense, but unless you have some knowledge of or time spent with its characters there won't really be any emotional core for you to latch onto - given that Kurapika and Killua's experiences are really pivotal to any impact the film's narrative has, to be left without having travelled that journey with them greatly reduces the efficacy of the story here. Phantom Rouge can still be enjoyed as an action-oriented shounen film, but it'll very clearly be missing something for newcomers.

Ultimately however, it's to fans of the franchise that we defer when it comes to our final evaluation of Phantom Rouge - this is a film that knows its audience and what they want to see from such a film and delivers it succinctly and at a rapid pace that ensures that the movie's running time flies by without any element threatening to outstay its welcome. Some bigger budget visuals would have been nice, and like most shounen movies there are no surprises to be found within the film's plot, but this is still a fun little film to watch in spite of its predictability when push comes to shove.

7
It'll impress existing fans far more than it will newcomers, but provided you have some background with the series Phantom Rouge is almost everything you could ask for from a Hunter x Hunter movie.
COMMENT AND DISCUSS
blog comments powered by Disqus