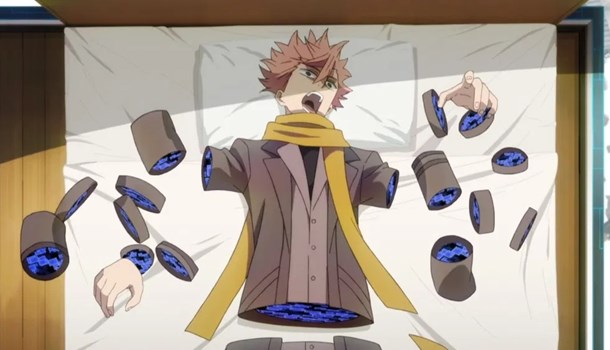 Take a blender, add a dash of Psycho-Pass, throw in a pinch of GitS: SAC, slice a little of The Perfect Insider, and grate a touch of Un-Go into it; whizz all the ingredients up in a conference room of creative types and you’d get ID: Invaded. That’s not necessarily a bad thing but it serves to illustrate its limitations and its successes. I kept being reminded of series I liked more.

Initially, ID: Invaded is intriguing, with ex-detective Narihisago dropped into an id well – a reproduced subconscious - of a serial killer. Stripped of identity but believing himself to be the Brilliant Detective: Sakaido, Narihisago finds hints that this and other serial killers are being manipulated by the faceless John Walker. But who is John Walker? Over 13 episodes we’re sure to find out…

Immediately, ID: Invaded is quite literally a visually lovely jigsaw of bodies and the floating parts of a town. How Narihisago learns to engage with his disparate surroundings is pleasingly baffling. It has the type of logical bafflement that you expect of a storyteller that knows what is going on but knows that you do not and is willing to keep you hanging – trusting to your intelligence. It’s tight and well thought out. That Narihisago is physically in pieces and that there is, on the floating fragment of a house above him, the intact body of Kaeru, a young and apparently murdered girl, seemingly in a (un)locked room mystery, leaves your brain whirling to keep pace with just what’s going on. Like Narihisago as he sees parts of the town and rooms floating around at impossible angles and uses his disconnected limbs to pull it together (metaphor anyone?), it’s hard not to have your interest piqued while you enjoy the seamless CG animation.

So yes, it's enjoyable from the start, the thrill of having my brain cogs whirring away trying to understand just what’s going on is a pleasure. Like Narihisago I’m putting the pieces together and I like that I’m not being treated like an idiot and being pummelled with a ton of exposition.

Behind the id well are a team of investigators – headed up by Momoki. Most of these work in the lab, and monitor Narihisago’s journey through the id well. They see what he sees, look for clues, there’s a real sense of working against the clock and they display real expertise; but we also have two external investigators, armed with a device that allows them to monitor and track cognition particles that are apparently given off by the desire to kill. (Shades of Psycho-Pass monitoring for potential criminal acts, anyone?) One of these, Hondomachi, is soon in peril because of… ID: Invaded wearing its influences on its sleeve like a poorly blotted red wine stain. She’s kidnapped and how is so staggeringly obvious I for one wanted to scream my lungs into tomorrow. A sly nod and wink to other serial killer texts is fine, but the wholesale lifting and shifting of a plot device from Silence of the Lambs that you see coming from so far away they may as well put up a sign: Just NO! It’s a lazy moment that sucks out any tension and detracts from any originality. I suspect the creators mean it as a sly nod and a wink to SotL but the references are just too overt. Later, it gets away with lifts and shifts from The Vanishing, but in the annals of serial killer movies SotL is top of the heap; yes, The Vanishing is just as good but less well known and the borrowing feels more suitable. Equally the overtones of Scanners (head drilling) and Driller Killer (ditto), all work because they are sidebars that make you smile when you realise the reference (though I may have assumed the Scanners reference) but the SotL instance is too overt and too unnecessary. (Sorry but as you can see it really, really narked me.)

In some ways this sums up my response to ID: Invaded. There is so much to like but so much that frustrates. Over the 13 episodes we’re introduced to many characters but rarely do any of these feel fleshed out and most seem to mulch together into a faceless team of people. OK, of the id well investigators most of them don’t need to stand out but those that do, do mainly because Togo is the only woman (excluding Hondomachi) and one has wilder and more strongly coloured manga hair. Equally, Narihisago confused me. The series explicitly states that only those with the desire to kill, or even more explicitly, serial killers, can enter an id well. Yet Narihisago’s police backstory – including Momoki – shows he’s killed and for personal reasons but I can’t recall anything that actually suggested, beyond us being told that he is a serial killer. (Show don’t tell, is pretty basic, no?) He’s certainly no Jack the Ripper. Did I blink and miss something? So many other elements seem a bit confused or else just you wonder “why?” For instance why does Hondomachi look 13 when she is 23? Perhaps for impact when threatened with the drill, and her response to it? I don’t know. It feels like a lot of potential often averagely realised due to lack of care and attention to detail.

The inability to fully immerse in the world of ID: Invaded isn’t helped by my opening comparisons. It has none of the joyful, screwball, kinky mystery fun of a series like Un-Go (or the great ending song / animation – PS, I’m a big fan of that series full stop). The relationship between Momoki and Narihisago mirrors several in Psycho-Pass: the cop and ex-cop criminal relationship as well as the tech involved.

Worse of all, as much as I love GitS: SAC, it can fall into the trap of being exposition heavy at times. As ID: Invaded expands its story I felt that almost every conversation was a burst of exposition. It couldn’t escape the need to explain, then explain some more, then explain a bit more again. It pulls out the worst heaviness of GitS: SAC without the thrills.

All that said, I did quite enjoy my time with ID: Invaded, watching it over a couple of nights. This is probably the best way to watch it. Why did I enjoy it? Probably because even if it has unfulfilled potential, as a product it's very polished. I enjoyed earlier works by director Ei Aoki: his two Garden of Sinners entries and Aldnoah Zero (but then I also like the writing of Gen Urobuchi). It’s in many ways a smooth and enjoyable mystery series, smartly animated but lacking a spark of individuality that allows it to rise above the crowd. Even when it gets to who is John Walker (and yes, his silhouette is nabbed from the Johnny Walker figure, again echoes of influences worn too overtly, Murakami having used it in one of his novels, I forget which), it’s pretty obvious who John Walker is because there is almost literally only one person it can be. (And I am bad at working these things out.) True, watching The Perfect Insider, you work out the solution at the same time as the protagonist does but that never seems to matter, because the whys and wherefores and characters are as interesting as what the answer is, where here the reveal seems to matter more to the storytellers than it does to the audience.

So having perhaps produced a hatchet job, berating it for not drawing its characters well enough, for being lazy in showing its influences I nevertheless recommend the series. My frustrations were mainly sidestepped by the fact that the series always manages to keep you just interested enough, plus much of the design when it comes to the id wells is genuinely compelling - right from the off and into the latter stages as we delve within the ids of some of our protagonists, the designs are intriguingly conceived and well animated. The mystery components have some compelling elements, mainly the repeating motif of Kaeru’s corpse appearing in every id well as the precursor to the mystery and what that portends.

I do have to ask: why in the English translation have they used “ID: Invaded” not “id” or “Id”: Invaded? Is this meant to be a pun on ID and id? As the id is thematically and literally the key to the series it seems such an oddity. Another oddity is the 18 rating. I assumed this may have been for the same reason as the last DVD in the original run of the Second Barrage of Black Lagoon where [SPOILER ALERT] a teenager kills themselves with a sword, which is intended to be shocking. And again this might be the reason. I don’t particularly understand it – the suicide in Black Lagoon is meant to be horrific and manages it though we see nothing. For while there is some violence in ID: Invaded, none of it is excessively bloody, gratuitous or unpleasant (rightly or wrongly). Maybe the BBFC reviewer was having a bad day or it’s one of those: if X is present Y rating has to be given unless the offending article is cut?

Still, I’m glad that Ei Aoki and writer Otaro Maijo have tried to do something different, even if not entirely successfully, and that is perhaps why I feel strangely kind towards ID: Invaded. Perhaps also because most of my main: ARGH NO! moments came in the first half of the series, and these smoothed out latterly (obviousness of John Walker aside) and films or series that start strongly and end weakly tend to get my wrath more than the opposite.