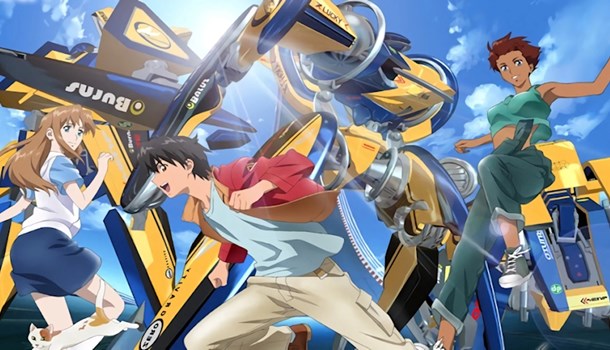 Commissioned by Cartoon Network and produced by Ghost in the Shell animators Production I.G, IGPX has both the funds and the talent to make it shine. The question is, how does this hi-tech racing fare stand up against other "team" shows such as Yu-Gi-Oh and Beyblade?

Pretty well, actually. At it's core, IGPX takes a well used formula - a bunch of underdogs competing in a series of races, learning how to work together, grow and attain a sense of responsibility and become real winners, with a cast of likable characters, each with their own flaws to overcome. Like the aforementioned Beyblade, the tone is light and the writing isn't too bad - at least the language isn't too over the top (Radical! Dude! Totally!), and at times the four episodes on the disc are quite understated, which I found a pleasant surprise.

Our team consists of 3 young, talented racers - the gifted and rebellious forweward, Takeshi Jin, Defender and  "common sense" martial artist Liz Ricarro, and team conscience and cutie pie Amy Stapleton, who rides with a cat which can talk to her. This isn't fully explained, and there's a dream sequence featuring Amy and her pet that made me feel I was on Acid, but she's still my favourite character. Altogether they fill the usual stereotypes nicely. There's also a grumpy coach, cheery engineer and female boss who runs the company in the memory of her father giving us our family of father figure, big brother and mother figure. It's very well thought out.

The racing itself takes place across a 60 mile circuit, where 2 teams of 3 players ride mechs, trying to take each other out of the race and cross the finish line first. It reminded me of a sanitary Motorball (Battle Angel Alita) and provides the action to keep you interested away from the locker room antics.

The CGI is of a high quality, as you'd expect given who's behind it. Animation is solid if not stunning, but given almost anything looks god in digital animation, it doesn't stand out from the current crowd of titles so much as fit in. The voice cast give it a good go too, with a few names you may have heard of supplying the vocal talent, chief amongst which is Haley Joel Osment (Sixth Sense, Pay it Forward, some Family Guy eps and such), who gives an interesting commentary.

Without any sarcasm at all, I genuinely enjoyed IGPX. It won't set the world on fire, and we have seen the same thing in a multitude of other formats and titles a million times before, but there's a reason for that - people like it. If you want some well produced and mostly harmless anime, this is great Saturday afternoon TV.

Abundant. We get to see the first pilot episode, which was a very different beast to the TV series (although some similarities are there if you look), an interview with Haley Joel Osment, who clearly knows nothing about anime but seems like a good bloke, and an interview with the Cartoon Network producers, who also provide a commentary. Pretty damn good all in.
7
Slick, well produced and worth a look. It isn't Shakespeare, but that's probably a blessing.