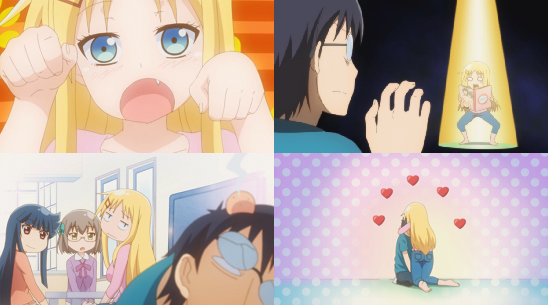 I Can't Understand What My Husband Is Saying - Eps. 1-3

While the perennial worry of a self-conscious anime and manga fan is how we are judged by our peers looking down on us from the larger mounds of their more mainstream tastes, sometimes you also have to ask whether we are at such a disadvantage - we can scamper freely in the base while they are stuck on the small squares atop their precarious pedestals, forever fretting about their narrow balance, and it'll be a long way down if they slip off the edge. Self-obsessed art luvvies are easy to mock - Private Eye even has a whole column dedicated to them humiliating themselves with their own navel-gazing - and the most vacuous, irrelevant and fraudulent impersonation of sophistication in the art world that there must be is post-modernism. It's even in the name - post, as in what detritus is left after something else has already been done. Post-modernism and its chum "deconstruction" (oh, how the internet loves that word) are terms that gets bandied around a lot by people wanting to seem mature, but they're swinging at low-hanging fruit - or rather the windfall that's already a bit mouldy. It doesn't actually create anything, it's just picking apart what someone else has already done - it's repetition, masquerading as erudition.

Despite all that, for all of the criticisms it still remains that at the end of the day it has persisted because it is effective. Parodies are one of the most common forms of humour on television and the internet, and they're one of the most effective too - the common assumptions we work through unthinkingly as part of our rote routines can have their absurdities recognised when we hold them up to a mirror. Certainly otaku have a lot of tics and quirks to see, and so anime studio Seven has plenty of material to fill out its established line of blink-an'-you'll-miss-'em self-referential gag-reel otaku "webtoons", several of which you can also watch on Crunchyroll, the latest of which is the currently streaming I Can't Understand What My Husband is Saying. Given that it's coming after three other titles - Strange+, Inugami-san to Nekoyama-san, and Ai-Mai-Mi Musou Catastrophe - will it be a profound meditation on the deeper thoughts of us and our ilk, or is the well dry and the jokes dusty?

Kaoru and Hajime are a young, newly-wedded couple - they don't really exist in a heady state of marital bliss though and seem to have married each other just because they can shrug in time to one another. Hajime says he won't be able to make Kaoru happy but Kaoru doesn't really have any ambitions in life so she's not all that mithered, really. Their honeymoon was a bit boring, but it was nice enough so that's okay. Kaoru is your average work-a-day office lady, but her husband Hajime is an out-and-out geek completely obsessed with anime and manga. Can a Normal and an Otaku find domestic bliss with such different frames of reference? Will they be as ill-fitting as chalk and cheese, or do opposites truly attract?

A lot of the jokes in I Can't Understand What My Husband Is Saying are easy targets - Kaoru gets her husband to do things for her by acting moe, Hajime can't invite friends over because they're all on the Internet - but others are quite well-observed. As a reviewer, a gag where Hajime can't enjoy a movie because he's dissecting it for his blog (Kaoru apologises for just thinking that it was pretty fun) certainly hit quite close to home! In another episode Hajime's younger brother (a cross-dresser and shonen-ai doujinshi sensation) comes round to the couple's apartment for a visit - and immediately vanishes into the computer room and doesn't come out for the whole day. He acts crazy until Hajime whispers that Kaoru's a Normal, and after testing it out by quizzing her on otaku terms (Kaoru thinks that "seme" and "uke" are talking about martial arts) abruptly clams up and starts being a lot more controlled. Hajime proclaiming that an anime character is his waifu, producing not-unreasonable outrage from Kaoru who points out he's already got a wife really had me snickering. For all their foibles though, Hajime and Kaoru have a quiet fondness and ease around each other that's quite heartwarming.

These sort of quick-fire, hip-shooting gags can be knocked out in a studio's sleep - but the thing is, they work. Each episode is just three minutes long (plus thirty seconds of credits where Kaoru and Hajime sing a little ditty of a duet in the bath which is actually kind of sweet and gives a nice feeling to finish up on) so they never overstay their welcome. Like the best gag comedies it's fast-paced so that if one joke falls flat it quickly skips on to the next one rather than dragging things out, or if one joke is successful it doesn't push it too far and sour it. The episode titles can be little gags in themselves, whether it be Hajime's brother being introduced with the daft and overblown "Surpass Gender & Blood! Comeforth, Otokonoko!" or the lack of friends being shown in a pun on Oreimo's full title, as "My Little Sister Can't Be This Popular" becomes "My Otaku Brother Can't Have So Few Friends" - simple but effective, and made a little glint of genius with the (Etc.) that's added on the end, a knowing reference to the almost memetic influence of the oft-repeated and parodied title. The one thing that really limits the show's appeal though is that there's quite a lot of sex humour, particular with Hajime's brother who brings out more use of the pixel filter this side of Fakku, which is a shame because he really didn't need to start stripping to get his point across and it needlessly limits the audience. If you can look past that though, then as coffee-break anime that you can enjoy on your smartphone, I Can't Understand What My Husband Is Saying actually hits the spot as a quick burst of comedy for the otaku on the go.

You can currently watch I Can't Understand What My Husband Is Saying in streaming form on Crunchyroll.