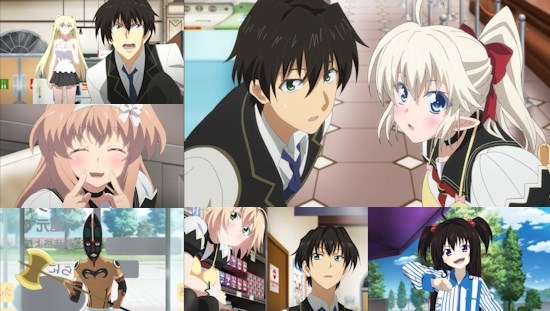 I Couldn't Become a Hero, So I Reluctantly Decided to Get a Job - Eps. 1-3

Remember Hataraku Maou-sama, aka The Devil Is a Part-Timer? Perhaps not, as it never streamed over here and hasn't (at the time of writing) been picked up for a physical release in the UK. However, its success in Japan has started the typical rush of copycat series trying to piggy-back on its success, which brings us to the overly verbose title in question here, I Couldn't Become a Hero, So I Reluctantly Decided to Get a Job, aka Yuusha ni Narenakatta Ore wa Shibushibu Shuushoku o Ketsui Shimashita if you prefer its equally clumsy Japanese title.

While The Devil Is a Part-Timer saw a demon lord inadvertently sent to Earth where he ends up working at a fast food chain, I Couldn't Become a Hero turns things around slightly by making a hero within its fantasy world the protagonist, and sending him off to work in his own land rather than our own planet. To expound upon this a little, our protagonist Raul is about to undertake his final exam to allow him to become a hero, only to find it cancelled as the demon lord against which all of these heroes are fighting has already been killed. With no further employment prospects on offer in the demon lord-slaying industry, Raul takes the only job available to him, that being work in a quiet, small-time electronics store.

The twist in this tale comes when the shop takes on a new employee named Fino who, as it turns out, is the son of the demon lord himself. And when we say son, we mean daughter. Cue comic circumstances, as Raul has to teach Fino not only how to perform the everyday tasks expected of her within the store, but also how to deal with the human world in a broader sense. Oh, and this being the kind of series that it is, Raul also spends a lot of his time walking in on Fino in various states of undress, while the other women around him also suffer from a number of wardrobe malfunctions (and even when they aren't the camera is always positioned to ensure a peek up a short skirt at every opportunity).

Fan service aside for a moment, let's start with the one big positive of the early episodes of this series, that being the relationship between Raul and Fino. The rapport between these characters is great, and the sole reason that has left me tempted to keep watching the series - Raul is admittedly a bit of a bland lead, but his heart is in the right place and his resigned apathy makes for a good foil to Fino's infectious excitement at every little development in her life. It's a sweet depiction of a relationship that could so easily have been played as a conduit to more sexual content, so to see them largely avoid that trap is actually quite refreshing.

We also have to compliment the series on its world-building, which has a fun, Flintstones-esque vibe to it as it depicts a world where magic effectively replaces electricity to bring some smart ideas and visuals to a series that could otherwise hardly be called original.

Unfortunately, the wider entertainment value within these opening episodes of I couldn’t become a hero are less noteworthy - the show's humour largely falls flat and at best elicits the odd giggle or two, the rest of the cast struggle to establish themselves as anything more than lumps of meat to be ogled at, and the plot at this point seems happy to meander along while only occasionally hinting at any greater threads that might run through it. If you're happy to be doused in fan service with little attempt to weave it into the fabric of the show's story that's one thing, but beyond those strong moments between Raul and Fino there isn't anything we can call memorable here.

If you're here for the fan service though, there's no denying that Asread have provided a colourful and reasonably well-animated affair here, with lots of detail lavished upon the important things in life like the creases on a pair of panties and the completely improbably physics of the female character's breasts. Catchy theme songs and energetic voice acting round off a polished package - as polished as those shiny, shiny boobs, in fact.

Judged on these first three episodes, I Couldn't Become a Hero certainly isn't a bad series, and it does at least try to strike out in its own direction rather than feeling like nothing more than a lazy attempt to ride the coat-tails of other, similar efforts. Unfortunately, it doesn't do anything particularly noteworthy either to grab your attention or tickle your funny bone - if you fall helplessly in love with its lead pair of characters (as you'd have some justification in doing) then it may be worth persevering simply to see where the series takes them, but that aside this will be little more than one of the autumn's quickly forgotten also-rans.

You can watch I Couldn't Become a Hero, So I Reluctantly Decided to Get a Job in streaming form on Crunchyroll.

5
A sweet relationship between its two main characters doesn't gloss over the fact that this series if fuelled more by its desire to titillate than entertain the audience.
LATEST REVIEWS