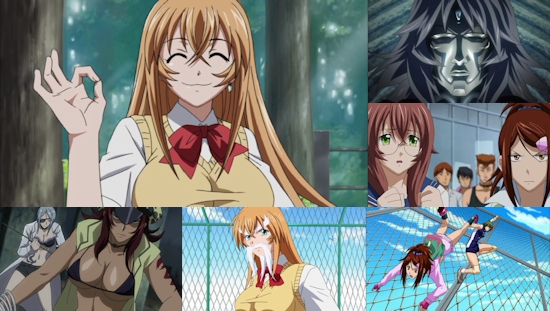 Beyond an inevitable degree of cultural osmosis I'd managed to avoid any real contact with the Ikki Tousen (or Battle Vixens, as it was once known in the west) franchise until earlier this year when the call came to watch and review its third season, Great Guardians, for another publication. While our own Robert Frazer found plenty to praise about the series, it left me cold - a plodding parade of panties and nudity with a rather dull plot that just about held it together like the strained, torn clothing of the cast struggles to hold together the modesty of its female leads.

It was with a heavy heart then that I took on the role of reviewing the franchise's fourth and (at the time of writing) final series here at UK Anime, taking a deep breath and bracing myself for more dull, predictable fare. Imagine my surprise then when by the end of the series I found myself having rather enjoyed what Xtreme Xecutor had to offer, surpassing both my expectations and its ridiculously "xtreme" title.

Thankfully for a relative Ikki Tousen newcomer like myself, this latest series begins with a lightning-fast recap of events so far as its cast seek to replay and recreate the destinies they have inherited from China's Three Kingdoms era some 1800 years previously. All of this culminates in the Battle of Red Cliffs, which as a result see Xtreme Xecutor begin with a time of peace between the various allegiances fighting a turf war within Japan's Kanto region.

Into this unusually quiet set of circumstances stumbles Bachou Mouki, a young girl who is keen to mete out vengeance on behalf of her deceased brother, the responsibility for who's death can (as far as she's concerned) be placed firmly at the door of Moutoku Sousou. When her visit to Kyosho Academy to make good on this desire from revenge goes awry, she finds herself in the company of the girls of first Seito Academy and then Nanyo Academy as she seeks a "master" to train her. As it happens, Hakufu Sonsaku is more than happy to take on such a disciple, even if her idea of training isn't quite what one might typically expect.

All of this seems to serve as little more than a distraction to some seemingly nefarious goings-on at Nanban High School, who get in touch with all of Kanto's rival academies to invite them to a "Big Fighters Tournament" - a suspicious invitation that originates from the mysterious Kentei, but one that the other schools feel duty-bound to accept regardless. So what plan is Kentei masterminding exactly? It isn't long before fears that the tournament invite is a trap proves to be entirely well-founded, leaving the only remaining question to be whether the massed fighters of the Kanto region have what it takes to stop him.

Xtreme Xecutor's story admittedly won't win any awards for originality (it's the kind of fare that is almost reminiscent of a Saturday morning cartoon in its setup) but it is executed with some level of aplomb - its story is well-paced and keeps moving without too many lulls, there are some well-executed moments of comedy sprinkled throughout to ensure that things never get too serious, and the show's action scenes bely the limited animation on show to nonetheless convey a certain amount of power and movement which is mostly satisfying. Indeed, our only real complaint here (aside perhaps from some clumsily inserted flashbacks here and there) is the show's climactic fight, which is skimped on hugely to the point where it's barely shown directly or animated at all, leading in to a rather unsatisfying conclusion to the main event's within the series when it should have been a spectacular highlight.

Of course, we can't ignore the fact that Ikki Tousen is also a tent pole (with every pun intended) series when it comes to fan service, and this is certainly all present and correct (or incorrect, depending upon how you look at it) here - low camera angles, panty shots, clothing ripping off and lots of exposed breasts are the order of the day here, although at least these moments are all woven into the narrative and so never feel forced beyond the implausibility of the cast's flimsy wardrobes. The girls are never fazed by their nudity either, so you'll find no screams of embarrassment as everyone simply carries on regardless even if it means fighting in the buff - in a weird way, it's almost refreshing, but those with an intense dislike of such fan service surely won't be need to be told to steer clear of the Ikki Tousen franchise anyhow.

Also present in this collection is a decent stack of additional materials, including half a dozen inevitably perverted bonus shorts which offers an opportunity to peek into the main cast's dreams, and perhaps more importantly an entire disc dedicated to the Shugaku Toshi Keppu-Roku OVA which follows on from Xtreme Xecutor and takes in a school trip to Kyoto with a difference, that difference being lots of fighting action. In broader terms, we really have absolutely no complaints with the quality of this release - subtitles are solid and almost entirely error-free, both the Japanese and English audio tracks are excellent and full of energy, and video quality is top-notch too for a DVD release.

Ikki Tousen: Xtreme Xecutor isn't a series that will subvert your expectations of it, but it might at least surpass them - it's a well-made and surprisingly entertaining series that takes a simple formula and story and makes it work by pacing it well and smartly utilising a roster of characters that can be fun to watch beyond their roles as fodder to be ogled at. As Robert said of its previous series, Ikki Tousen is superficial but slick, and that's a comment that is equally applicable to Xtreme Xecutor - provided you don't feel ashamed at the mere thought of having it within your DVD collection, it might just be worth a look.

English 5.1 and Japanese stereo audio with English subtitles. Extras consist of textless opening and closing credits, US cast commentary tracks for episodes one and two, trailers and commercials, a Six Dreamy Views series of shorts and the 45-minute Shugaku Toshi Keppu-Roku OVA.

7
Originality isn't its strong suit, but this is made up for by a well-paced, earnest and fun story that is workmanlike in delivering plenty of entertainment.
COMMENT AND DISCUSS
blog comments powered by Disqus