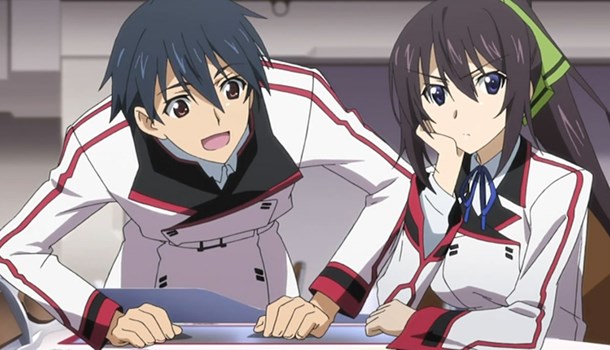 It has been said by quite a few commentators that, as a species, we are lead primarily by those least suited to lead. By this, I mean men. Males are aggressive, prone to anger, greedy and more impetuous than our female counterparts. It has been suggested that many of the wars of the last century, and the ongoing poverty and resources crises which we find ourselves in, may have been avoided if we were less of a Patriarchy, and more of a Matriarchy. Interesting, no?

Infinite Stratos is a universe where the scales of power have been adjusted through the creation of a powerful new mecha platform which can only be used by women. Subsequently a longer-term peace has been reached now that conventional war has all but been abolished. Over time these weapons have been re-purposed, used instead to demonstrate superiority of one country over another, and this is where the IS Academy comes in. At the IS Academy, the best of the best from every country come to study about the IS platform, learn to pilot and then demonstrate their skills in a continuous test of one-upmanship (one-upwomanship? - Ed).

So, we have powerful mecha, high school girls and the inevitable immaturity which that breeds, and we have elitism. There is only one thing which can cause this tinderbox to flash into a full-blown forest fire: sexual tension.

Enter stage left Ichika Orimura, brother of the famous IS pilot Chifuyu Orimura (who is also a teacher at IS Academy). Ichika is the exception to the rule on piloting the IS platform and stands as the only male who can interface with the mecha. He is enrolled, against his will, at the IS Academy, surrounded by hundreds of adolescent girls, and implanted into a class with his former school friend and confident, Houki Shinonono. As a delicious co-incidence, Houki just happens to be the younger sister of the creator of all of this mecha madness, Dr Tabane Shinonono, whose sanity can only be questioned as it seems quite evident as the series progresses that Ichika’s ability has been orchestrated by Tabane, possibly as a means of finally getting Ichika and Houki to shack up. At least that’s my theory, and I am probably getting ahead of myself there a bit. Too many fan-fictions and doujinishi!

The fire begins to burn when Ichika finds himself getting closer to Houki as she introduces himself to school life. He quickly draws attention from others in the school, including Cecilia Alcott, the British IS representative (one of my favourites!) and Lingyin Huang, a former school friend of Ichika’s. These three fight it out between them for the attentions of Ichika in true cliché anime harem style. As you can imagine, the fights inevitably involve the use of high powered mecha which is where a lot of the entertainment value comes in.

Now, let’s add some more fuel to the fire. In comes Charlotte Dunois (the cross-dressing French representative) and the fiery Laura Bodwig, the modified ex-military German representative, and the war soon becomes nuclear... especially when Charlotte moves in with Ichika and Laura declares him as her wife.

Surrounded by all this, it is no wonder that Ichika has trouble maintaining his sanity - how he isn’t permanently concussed I have no idea. What is also a massive surprise is how he manages to avoid shacking up with any of them. Seriously. A high school chap, easily over 16, surrounded by girls, most of whom are gagging for him. And this is where the series becomes clichéd. As with most harem series, the male protagonist has no testicles and instead of focusing on one or maybe two of his potential lovers, he tries to be friends with all of them, possibly as a marketing ploy to make us choose our favourite and then go out and seek the inevitable merchandise...

Thankfully, this first series of Infinite Stratos balances the silly harem comedy side with some exquisite battle scenes involving ludicrous and fantastic mecha and weaponry. Although lacking in a cohesive story the fights, that are seemingly only there for fighting's sake, are very enjoyable.  When paired with the strong character development, this provides a lot of entertainment with little mental effort. Although I am aware there is a story which acts as an adhesive between the light novel volumes which provided the material for Infinite Stratos, it certainly hides itself well.

The main draw to the series then is the mecha design and the art direction. This is where I personally think the series excels. The mecha are gorgeous (if preposterous) and the fights fluid. Corners have been cut at times, mostly by focusing less on the action intensive fighting scenes, and more on static school based scenes, but that isn’t enough to deter me. Again, as we repeat so frequently with UK releases where a US release has a Blu-Ray available, the series does benefit from a High Definition release and it is a pity that the economics unfortunately don’t allow for the Blu-Rays to be available here.

On a final positive note, one of the attractors to Infinite Stratos was the voice acting. It’s fantastic, and I honestly meant that - not just fantastic in the comedic sense. The actresses playing Cecilia, Laura and Charlotte have clearly had a highly amusing time playing their parts and the work they have done with the accents of each country make the English track much more enjoyable than the original Japanese language track which is devoid of such regional inflections.

Infinite Stratos is by no means a serious series. It’s devoid of any real depth, with the greatest mystery being what makes Tabane’s robotic ear’s move. However, the series makes up for the lack of depth by being funny, oddly compelling and violent. If you walk away from this series without a “favourite girl”, you don’t have a soul.

English and Japanese audio with English subtitles.  Extras consist of subtitled Japanese audio commentaries for episodes 4, 7 and 12, an interview with director Yasuhito Kikuchi, "Radio IS" audio feature and textless opening and ending credits.