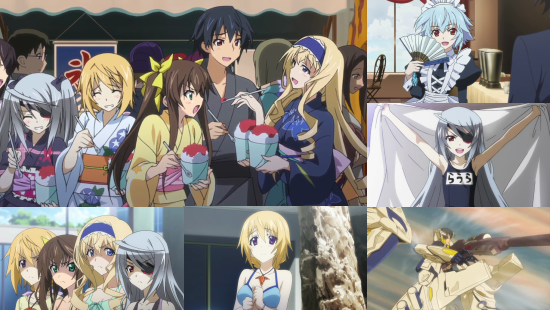 One of the challenges of writing about series which are being simulcast worldwide is that there are moments when you come across the sequel to a series which hasn’t been seen, legitimately at least, in the UK. It is also equally challenging when said series is due to be released in physical format in a few months’ time after the streaming of its sequel. But, that is anime. Although this review is written assuming that you have at least some knowledge of what an Infinite Stratos is, I have included a brief synopsis of the sequel’s predecessor just so you have a chance. I assure you, the series isn’t that intellectual...

Infinite Stratos is a perverted harem anime featuring some quite incredible mecha design. The series is based around the premise that these Infinite Stratos (IS) mecha can only be piloted by compatible females. The girls are all taught at an elite academy and the fun really starts when Ichika Orimura - brother of the famous Chifuru Orimura, world champion IS pilot - appears at the school. The thing is, even though Mr Ichika is a bloke, the IS mecha respond to him. Essentially, he becomes a lone male, surrounded by teenage girls who have at their disposal a lot of firepower. In true anime fashion, the series quickly turns into a female competition where the girls vie for his attention using multi-billion dollar mecha. Some story happens on the way, but in all honesty it’s just there to give more opportunities for certain characters to get one up on the others.

In all fairness, it’s also absolutely hilarious. Infinite Stratos 2 (IS2) is a direct continuation from where the first series left off, at least in theory. The second series begins by introducing a new foe - a mysterious lady and her IS whose primary identifying features are to be both extremely vicious and sexy as hell. Oddly enough, her IS when transformed resembles a purple/black butterfly, reminding me of another particularly violent woman from Accel World. I digress.

At the end of IS, I personally was left craving more. The pacing of the first series was enough so that each character was well introduced and had her time in the sun before she was usurped by one of her fellow competitors for Ichika’s affection. Fights were had, relationships developed and by the end of the first series, even with its paper thin plot, and I was ready for some more mecha action. The first series delivered a lot of fighting, a lot of strategy and it was fun! So far, series two has not managed to match its predecessor.

What it has delivered is yet another competitor for Ichika’s affection - the school council president, Tatenashi, who is basically a deranged sexual predator. The characters who were developed in the first series - Houki, Charlotte, Cecilia, Lingyin (or Rin, depending on the dub) and Laura - have been changed in subtle ways to make them feel less... real, for lack of a better word. Their characters seem flattened and less deep, and so far they haven’t made me smile or laugh. Whereas in the first series the arguments between Cecilia and Houki gave me a full on belly laugh, those moments have now passed - Cecilia seems almost pacified, while Houki has lost her tsundere fire.

Unfortunately that isn't all. One of the defining attributes of Infinite Stratos was the animation quality and the mecha design. They. Are. Beautiful. The suits, transforming and materialising from an item of jewellery or a watch, are a maddening combination of levitating wings, blades, shafts and shiny things which are simply beautiful, as well as being damn near impossible to render in PVC. When animated, these CG mecha moved as a whole and the conflicts were great fun. So far in the second series, the IS have almost become secondary to the harem antics, at least in the first three episodes. While there is a hint of a plot forming with the mysterious purple butterfly lady of death, so far all that Infinite Stratos 2 has had to show for itself is giggly clothes shopping, sadomasochistic massaging, waiter cross-dressing combined with maid-service and a lot of rather convenient falling.

As a pervert myself who enjoys a bit (Just a bit? - Ed.) of the above, I have to admit that in this case, I am put off a bit. Infinite Stratos is losing, although it has not quite lost yet, its integrity and is becoming more of a perverted romantic comedy with fighting thrown in on the side, like Samurai Girls or Sekirei (don’t get me wrong though, I love both of those series, and their sequels kept the pace, quality and characterisations from their original series). Perhaps I was just blinded by the shiny mecha? All I know is that after finishing the first series, and continuing onto the second, the change in quality is obvious, and this leads me onto my final issue. At some point between the first and second series, someone decided to save some money. Some people may attribute this from going from watching a Blu-Ray release of the first series down to a streaming TV release, but the quality of animation has dropped, with the motions of the IS mecha becoming more jagged and less fluid as a result of having fewer key frames.

I had a lot of high hopes for this series, and to be fair I still do. Three episodes into Infinite Stratos 2 though, so far I am disappointed. The series does not match the high bar set by its predecessor and so far it is playing too much on the tropes done better by other series, losing a lot of its uniqueness into the bargain. I hope that the series manages to find its step again and we can be welcomed by a good, thorough finish. You never know, this might end up being a harem show where the male character actually grows a pair of balls and makes a decision, and goes the whole hog!

You can currently watch Infinite Stratos 2 in streaming form on Crunchyroll.

5
For Infinite Stratos fans only, but even then be prepared for some disappointment.
COMMENT AND DISCUSS
blog comments powered by Disqus