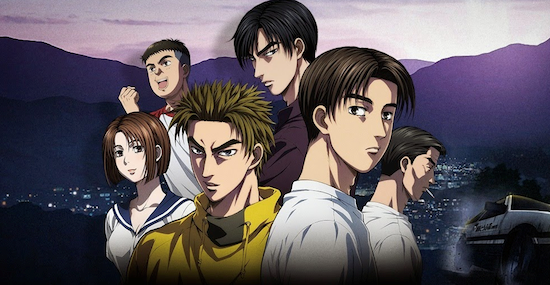 Takumi Fujiwara delivers Tofu for a living. But in doing so, driving an ageing Toyota Sprinter Trueno AE86 through the winding roads of Mount Akina, he’s picked up the driving skills of a god - dazzling a succession of local speed freaks who can’t believe they’ve never heard of him before. Before long, Fujiwara finds himself hooked in to a nighttime downhill run of the mountain trail, battling fellow driver Keisuke Takahashi.

Forever destined to be known as ‘that show with the CGI cars and Eurodance soundtrack’ the Initial D series has had so many anime adaptations you’d be forgiven for wondering where this movie incarnation (the first of a trilogy of installments MVM will be releasing this year) fits into proceedings. In fact, it’s a retelling of the early chapters of the manga source material - in many ways acting in a similar manner to the recent Gundam The Origin films; something backed up by its short run time (just one hour per film) and a visual treatment that aims to simultaneously capture the feel of the original while updating it for modern times.

As far as the aesthetic goes, the movie does a decent job of capturing the bold, chunky 90s feel it’s so clearly aiming for - pulling the smart move of overshading the CGI cars to give them a more natural, organic feel (similar to how the recent CGI Berserk used cross-hatching to shade its character models). The visuals are backed up by excellent sound design - with gear shifts and engine noise in particular sounding impressively like the ‘real thing’. You’d expect this kind of attention to detail in a series so clearly aiming at the hardcore automotive enthusiast market, but all the same, it’s a nice touch.

On the other hand, the soundtrack is merely passable, lacking the insane bombast of the Eurobeat tracks that made the series famous. That said, when you’re going up against karaoke classics like ‘Running In The 90s’ and ‘Deja Vu’, you’re fighting a losing battle from the off.

The movie’s biggest faults though are in its execution - racing through a cacophony of events with barely a spare moment to establish any kind of emotional connection with its core cast. Our driving rivals Takumi and Keisuke come across as plastic cutouts, locked behind their wheels in a depressing monotone of characterisation. Likewise, the English dub offered here keeps in line with similarly disappointing efforts from Sentai Filmworks (though the attempt to maintain the same voice cast as Funimation’s dub of the original series is to be applauded) - for our money though, we’d recommend sticking with the Japanese original audio.

All in all, Awakening feels like a wasted effort - attempting to retell the series’ story for a new generation of fans, but in a manner that feels like it’d appeal only to existing enthusiasts. For all the movie’s love of cars, at times it feels worryingly close to the experience of watching an extended videogame cutscene, stripped of all the excitement and edge-of-the-seat thrills watching great driving action can actually deliver. While efforts from other franchises (like the aforementioned Gundam) have fared well in their attempts to revitalise classic material, this take on Initial D feels like it’d have been best left in the garage - after all, part of the charm of the original Initial D series was the fact that it so perfectly captured the sound, feel and aesthetic of the 90s. Like a classic car, an imitation rebuild just lacks that certain something.

English audio or Japanese with English subtitles. Extras include a preview of Movie 2 and trailers for other Sentai Filmworks titles.

5
It looks the part, but this Initial D model rarely shifts out of first gear.
LATEST REVIEWS