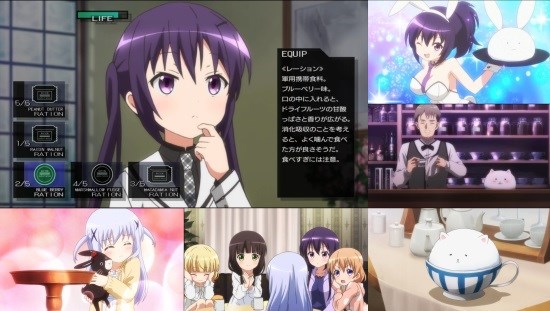 What do you get when you combine cute girls, coffee shops and rabbits? A slice of life show with cute girls working part-time in a coffee shop who will play with bunnies during their breaks, that's what. Like most slice of life shows that revolve around cute girls doing cute things, Is the Order a Rabbit uses its premise merely as a setting to allow an environment for comedy shenanigans to ensue. The series starts with Cocoa, a girl with a terrible sense of direction, moving to a town in order to attend high school; as she has moved there by herself she has become part of a home stay program. While traversing the town to find her new home she gets lost and happens upon a coffee shop known as the “Rabbit House” - drawn in by its cute name and the potential to pet some bunnies, Cocoa wanders in as a customer to discover that the same coffee shop happens to be her new home. The Rabbit House is home to Chino, the owner's granddaughter, along with her father and a white angora Rabbit called Tippy. From then on, Cocoa works in the coffee shop part-time to earn her keep along with Chino and their other part-time assistant. The rest of the cast is made up of other girls who work in other coffee shops and cafés around town.

With being set in coffee shops and revolving around waitresses and bunnies, Is the Order a Rabbit bases almost all of its comedy around the various duties of middle school and high school-aged girls working part-time, including but not limited to the bizarre creations the girls can make with latte art, baking bread and choosing the right blend of tea or coffee to fit the temperament of each character. Along with this are the antics the girls get up to when not working, which mainly revolve around shopping in town and playing with the unusually large amount of rabbits the town has to offer.

The entertainment is light and fluffy as you'd expect from a show of this variety, and each of the girls seem to conform to various stereotypes you'd find in a slice of life show - there's the youngest and most deadpan of the bunch, the overly active and cheerful girl, the stoic one that secretly yearns to be cute, the refined one... you get the idea. While the characters themselves are not all that interesting on their own, their interactions with each other do make for an enjoyable viewing experience and lead the way to several jokes. Surprisingly, some of this humour can be really funny at times, with a lot of puns and visual humour. Perhaps the best case in point of this is a sudden and unexpected reference to Metal Gear Solid of all things, when one girl mentions that her favourite snack is rations, although for the most part the series aims to provide a pleasant atmosphere to go along with it's whole coffee shop/cafe motif.

While things are relaxing and laid-back, that doesn't mean things are boring. There is enough comedy and character interaction to keep the viewer's attention, even though there is no general plot to speak of other than what events the girls get involved in on the day-to day-basis of working in a coffee shop. The series is definitely one to watch to help unwind, much like a good cup of tea or coffee - something that doesn't need much thought to follow and is something to watch for the atmosphere. Then again, it's also like a cup of tea or coffee in that it's a pleasant enough experience during it's runtime, but the effects of which will only linger with you for a very brief time afterwards before there is a need to get another drink.

You can currently watch Is the Order a Rabbit in streaming form on Crunchyroll.