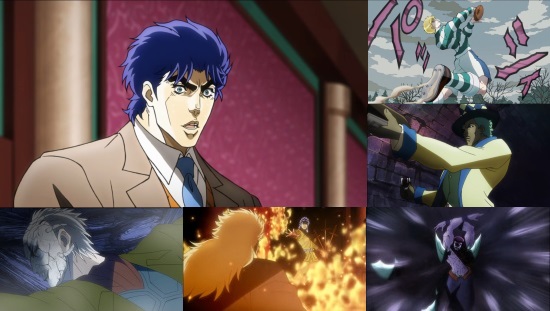 After much scepticism from the anime community, JoJo's Bizarre Adventure has finally found its way onto a legal streaming service thanks to Crunchyroll. Due to the series making very overt references to prominent figures in the music industry by using their names as characters within the series it was believed that it would never be licensed, or at least that it would have to go through heavy editing to rename characters in order to disassociate those characters from their namesakes. However, against all odds not only has Crunchyroll managed to license the entire series of JoJo's Bizarre Adventure, but it's also managed to keep the names of the characters intact within their subtitles.

JoJo's Bizarre Adventure is broken into several story arcs, each revolving around a member of the Joestar family. The first arc of the series, Phantom Blood, revolves around Jonathan Joestar (JoJo) and takes place in England during the Victorian era. The story begins with JoJo's father George agreeing to adopt Dio Brando, whose father managed to trick him into believing he saved his and his son's life during an accident when in actuality he was about to be robbed. After the death of his father and relocation to the Joestar home, Dio immediately asserts his dominance over JoJo in very violent and underhanded ways, all of which revolve around making JoJo's life miserable and denying him the luxuries in life he has enjoyed thus far. Dio's superiority complex is often at odds with JoJo's notion of wanting to be and acting like a gentleman. After a few fights, the story jumps ahead seven years with both characters now aged nineteen or so - JoJo is working hard to become an archaeologist, and to achieve this is writing a thesis on a mysterious stone mask that was a keepsake of his mother's and one of the few belongings of hers to survive the accident that killed her. While researching, JoJo discovers the mask's violent reaction to blood. which also piques Dio's curiosity. Dio, still retaining his superiority complex, also has a grudge against JoJo and his family's wealth and plots to use the mask JoJo has been researching in an attempt to murder him and make it look like an accident. However, in Dio's attempts to steal the Joestar family's wealth part of his scheme is exposed, causing some unexpected results.

From here the series turns into a supernatural battle series complete with over-the-top characters and a fighting technique that is based around controlling blood flow through proper breathing. The technique in question is known as “Hamon” and is taught to JoJo by a travelling warrior known as Baron Zeppeli. Thus JoJo, along with recently acquainted confidant Robert E.O Speedwagon, team up with Zeppeli in order to destroy the stone mask and put an end to defeat all those affected by it's curse. In order to do this, mastering the new fighting technique is the key to victory and within the process of JoJo doing this we see the characters perform some ridiculous feats in order to demonstrate control of Hamon. These feats include such bizarre practices as punching animals but not injuring them and winning a fight without spilling a drop of wine from a glass. While the Hamon users have some insane methods of fighting, the antagonists of the series have their own equally strange methods, which can mainly be attributed to them being reanimated corpses that take the form of vampire-like zombies and ghouls.

From here, the series does take a rather formulaic approach to its story progression. This can be attributed to the age of the source material and how this anime adaptation has stayed as close as possible to that material. However, even with this formulaic approach it doesn't waste any time with needless padding and gets straight to the matter. Unlike other shonen or battle series the fights are not dragged out and any explanation or observation of a fight is handled by whoever is on the sidelines watching (mostly Speedwagon in these episodes) - we see the characters get involved in frankly insane battles with characters who have crazy sets of powers, and things get so crazy that it manages to be awesome, allowing the series to not only display the bizarre goings-on but also have characters call them out and express their disbelief or amazement about what's currently happening. The fact that the series can display an over-the-top and completely insane set of circumstances and have a character act as a proxy for the audience is truly the show's greatest strength - it requires an attitude that seems to scream out “Yes, this is insane, we can all see this is insane. Just go with it. Why? Because it's so insane it's awesome.” Alongside this, the series also has the characters act in really bizarre ways. The trademark of the series is the ridiculously fabulous stylish poses, which involve characters putting their hands in their face, arching their backs, raising their arms and making gestures in a multitude of unconventional ways. There are a few let-downs here, mainly to do with the show's animation, some of which is very rigid and rough around the edges which seems to suggest to echo the low budget the series was given. The anime does do a good job with the resources it has available though, hiding this by changing the colour scheme at times to a stylised purple backdrop, with characters completely changing colour to match and making use of the stylish poses in order to stop characters from moving around too much.

Phantom Blood acts as a great introductory arc to the insane goings on of JoJo's Bizarre Adventure as an over-the-top and stylish series that revels in its own insanity to provide a fun and thrilling spectacle.

You can currently watch JoJo's Bizarre Adventure in streaming form on Crunchyroll.