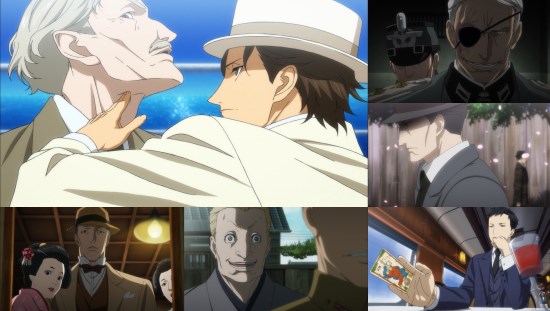 It is 1937, and the world is rapidly descending into the abyss that will become known as World War II. With mistrust and less than clear intentions spanning the globe's political climate, information is key to all of the nations who will become major players in the conflict to come.

Nowhere is this truer than Japan, a country where national pride has arguably stymied the success of any attempts to infiltrate other countries as spies - enter D-Agency, a new organisation founded by a former army lieutenant colonel, Yuuki, to find the best and brightest to train up as ace spies. While previous attempts focused on finding top military minds to take on this burden for their homeland, Yuuki's beliefs run entirely contrary to that - he sees army men as ineffective spies and thus looks elsewhere for his recruits, fostering an environment where survival and avoiding killing is prioritised over the more traditional belief that killing - or being killed - is an honourable way for a spy to conduct himself.

With a worldview that has upset the establishment in the midst of so much political tension, D-Agency needs results to prove itself, which brings us to the core of Joker Game - a largely episodic tale of its agents endeavours around the globe as they seek to glean information, unmask spies from rival nations and do whatever is required of their homeland.

So the scene is set for a series packed wall-to-wall with good, old-fashioned spy thriller stories, that take us from Japan itself to the streets of London and the French resistance movement amongst other key locations as the threat of a global conflict looms. I have to confess, I'm a sucker for this kind of story - this isn't a series filled with high-octane action and unbelievable gadgets a la James Bond, but instead paints a picture of a world of intrigue; of ingenuity and deceit; of double and triple-crossing; of suspense; of shocking twists and turns. Certainly, sometimes it can be a little schlocky (and in one or two cases it falls completely flat in quite ridiculous fashion), but the vast majority of its episodes are tense and compelling in exactly the way you would hope for from a series like this.

This comes in spite of a cast that are largely far from memorable by design - the spies of D-Agency are hired to blend in to any situation or location without anything that may make them stand out, and so it proves as it's hard to remember who is who across the majority of its cast. The episodic nature of most of the series really comes into play here - we may not remember the name or any intricate details of the "hero" (if we can call them that) of a given story, but as he's invariably the major focus of that episode we still spend enough time with them to want to see how their story develops, for better or worse.

On that note, the most curious part of watching Joker Game comes from its position in history - we know the path Japan is headed down, but any explicit references to this tend to be rather muted within the series as it mostly tends to take a neutral stance to the parties involved. Indeed, it's only during that aforementioned episode which takes in France's resistance movement that we see any kind of commentary that what is unfolding in the hands of Nazi rule is unpalatable, with much of the unrest, death and destruction we otherwise see pan out viewed as unfortunate or simply a product of the times. This is perhaps the only way to handle a series featuring a Japan-centric spy network, but it can feel a little unsettling if you start to think about it too hard.

The far from memorable cast of the show also extends to their designs - again, these men are not meant to stand out, and their character designs match to the point where they can be hard to distinguish. This can barely be thought of as a negative in the midst of a series which captures its era excellently in terms of atmosphere, clothing and decor, and it certainly evokes its 1930s and early World War II feel impeccably to further add to the feeling of importance attached to the events which unfold. It's a restrained effort from Production I.G that resists going for bombastic visuals even when it comes to its rare moments of action or violence, opting for a more realistic style without the kind of exaggeration so commonplace in anime.

That serious and episodic nature of the series bears some comparison to another Production I.G series in the form of Ghost in the Shell: Stand Alone Complex - switch out the cyberpunk future for World War II and the grandiose plotting of future terrorists with the less attention-grabbing machinations of spies, and there's a comparable feel to the broader structure of the two series. If nothing else, the two shows have the same assured manner of delivering their narrative with confidence, and a similar atmosphere built from careful crafting of the worlds and scenarios at their heart.

Of course, any comparisons to Stand Alone Complex ultimately fall flat against that behemoth (and I don't recall Ghost in the Shell having a silly episode with a dog on a boat), but Joker Game certainly scratches the same itch if you're looking for a serious and atmospheric series with lots of tales to tell in a compelling fashion. Meanwhile, if you've ever wanted to see an anime series try its hand at a suspenseful spy thriller, then almost every episode of this series succeeds admirably at providing just that. It's the kind of series you could only imagine coming from this studio, and it plays into their expertise to provide an experience that certainly isn't flawless, but is still well worth watching if its concept interests you.

You can currently watch Joker Game in streaming form on Crunchyroll.