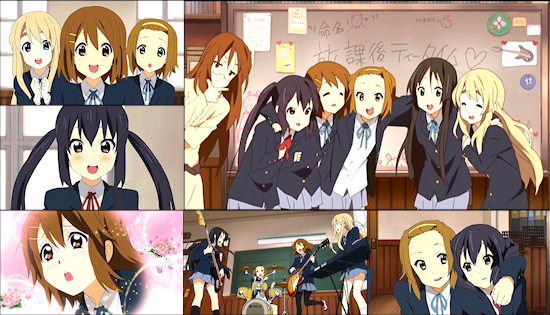 Much like the members of the light music club can't get enough of tea and cakes, we haven't been able to get enough of K-ON thus far thanks to the entertaining nature of its decidedly light-hearted and fluffy high school frolics.

Of course, by the end of the second volume of the series, the club had a brand new member to add to its arsenal, and this third selection of episodes on DVD sees Azusa Nakano join the club officially as she proves herself to be a more proficient (and altogether less ditzy) guitarist in comparison to Yui.  However, given the lax and downright lazy ways that the light music club has fallen into, will Azusa be able to mould them to her own requirements, and will she even last the course as a club member at all?

With such dilemmas out of the way, the group get to enjoy the club's second training camp, mixing pleasure and practice - albeit with much more of the former of course, as you might expect.  This leads in to the prospect of another school festival performance for the band, bringing them some full-on dilemmas to deal with from a falling out to deciding upon a choice of name for their group.

As per those previous volumes, the aim of the three episodes in the spotlight here are largely to provide fun, fun and more fun, which it provides via lots of banter and goofing around mixed with occasional and brief attempts to inject a little drama into the proceedings.

It has to be said that these particular episodes aren't quite as strong along those lines - there are less outright laugh out loud moments and opportunities to giggle despite the addition of Azusa to round out the quintet of major characters, and its moments of crisis never exactly live up to much in the midst of such a sweet and friendly series.

None of this makes these episodes bad of course - watching K-ON remains a fun, bright and breezy pasttime that proves to be a relaxing and enjoyable affair, and that's exactly what it sets out to do.  As per previous volumes, the animation quality is great throughout and given a reasonable treatment on this DVD, while the English dub perhaps tries a little too hard to mimic its Japanese counterparts but is still passable.

If you've been collecting the first two volumes of K-ON then there's nothing here that should dissuade you from picking up this third volume - it might not be quite as strong in terms of the episodes it features but it's still an example of the slice of life anime genre at its best.

English and Japanese 2.0 audio with English subtitles.  Extras on this disc are made up of an interview with the English voice actress for Ritsu, Cassandra Lee, and a "My Love is a Stapler" music video performed by the English voice cast.

7
Another fun, bright and breezy set of episodes that will undoubtedly keep fans of the series very satisfied indeed.
COMMENT AND DISCUSS
blog comments powered by Disqus