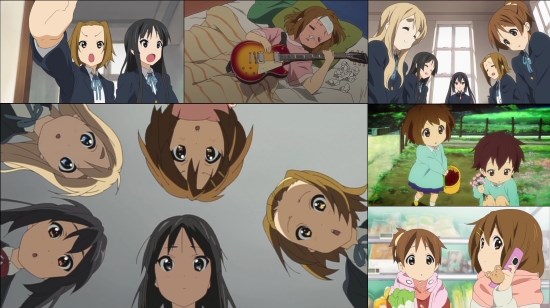 After running the rule over the first three volumes of K-ON at the time of their UK release, a lack of review discs have left us holding fire on this final volume of the series - now, with the show due its complete collection release on DVD via Manga Entertainment, it seems that the time is ripe to round off our coverage by taking a look at this fourth and final volume.

With just three episodes inhabiting this particular disc, we're actually left with only a single "proper" episode to close out the mainstay of the series, complete with the closest the show has come to a cliff-hanger - can Yui recover from her cold in time for After School Tea-Time's latest performance at school?  This series being what it is, after a few false starts and moments of last-minute drama all is well and the concert goes ahead without any real hitches, complete with a slightly touching montage to demonstrate Yui's growth on account of the bonds she's formed within the band in the process.

With this done and dusted, we move on to a pair of additional episodes.  The first of these, the final episode of the series' TV broadcast, sees the gang going about their own disparate business one Sunday, only for things to go decidedly awry for most of them in what is a surprisingly powerful crescendo towards a finale which celebrates the power of friendship to ensure that everything works out for the best.  This is followed by an OVA instalment, which sees the band invited to play at a live venue outside of their normal school performances - an exciting opportunity for those involved that acts as a feel-good way to close things out entirely.

Thus, K-ON comes to an end in virtually the same manner it has carried throughout the series - gorgeously animated (hence the disappointment of many at the cancellation of its UK Blu-Ray release), mostly light-hearted and occasionally pretty funny.  While the series is clearly not for everyone - our general experience is that you'll either love or loathe it, will little room for manoeuvre in-between - it works perfectly at introducing you to a group of characters, allowing you to follow them on an admittedly placid journey, and then occasionally giving you a prod to make you realise just how much you've come to care about those characters in the interim.  It's a heady mixture that succeeds in manipulating the viewer far more than it has any right to, and it's exactly this ability that makes the series so powerful above and beyond its well-realised humour and bright and breezy entertainment value.

No matter how much I talk up the power of K-ON however, ultimately it serves as fluffy light entertainment, and it works very well indeed in this regard as the kind of relaxing series that you can put your feet up to at the end of a long, hard day.  With only three episodes on this final volume, pretty variable video quality despite not having to pile episodes onto the DVD and an English dub that doesn't always do itself any favours(complete with translated songs that enter cringe-worthy territory at times), we can't rave about the series too much - if it floats your boat however, K-ON remains hugely fun to watch, and we'll be crossing our fingers that its second season also makes it to our shores, no matter what format it reaches us in.

K-ON is now available as a complete series collection on DVD from Manga Entertainment.

English and Japanese 2.0 audio with English subtitles.  Extras on the DVD are made up of a "Brush Pen, Ballpoint Pen" music video performed by the English dub cast, and an interview with the English voice actress for Tsumugi, Shelby Lindley.

7
K-ON comes to a fun and slightly touching end, even if the presence of only three episodes on this disc takes some of the sheen off this release.
LATEST REVIEWS