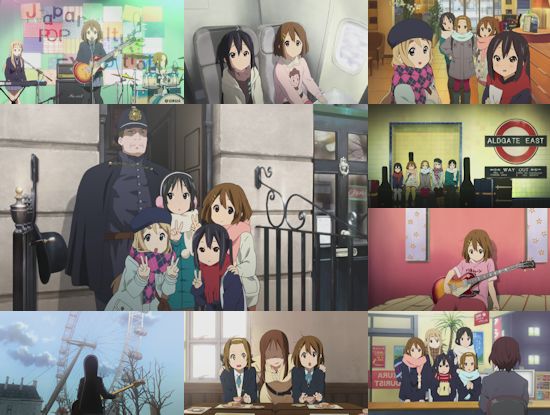 Although we're yet to see its second season reach the UK in any official capacity, the Glasgow weekend of this year's Scotland Loves Anime nonetheless brought us the European premiere of the franchise's theatrical outing - what's more, they brought the film's director Naoko Yamada along to boot.

Thankfully, K-ON is not exactly a series that is prone to spoilers, so I think we can get away with stating that this movie offering is set after the events of the show's second series, with four out of Houkago Tea Time's five members preparing to move on to a life at university leaving only their junior, Azusa, behind.  As a goodbye to their friend, the rest of the group are desperately trying to think of a suitably grandiose present to give to Azusa alongside their graduation - a plan which is quickly side-tracked almost entirely by a snap decision for the entire quintet to take a graduation trip.  But where should they go for this trip exactly?

In typical light music club fashion, an off-beat way of choosing the location of this brief holiday sees London flagged as their destination of choice, and thus after a little preparation we hop on a plane with the girls to pay a visit to the best capital city in the world (not that we're biased here at UK Anime or anything).  It's here that the film is really at its strongest, proving to be an absolute visual delight as it takes in both well-known and less recognisable landmarks while the girls find themselves dragged into impromptu musical concerts, getting lost and generally larking about in spite of Azusa's worries that her friends are keeping an important secret from her.

After a stomping concert on the south bank of the Thames with the London Eye looking down upon them, we return to Japan for the final segment of the movie, as Azusa's goodbye gift from the others finally takes shape and comes to fruition in a sweet, slightly touching and inevitably musical style before even the BBC gets a name-check in the closing credit video.

If we only had to talk about one aspect of the K-ON movie it would be its visuals, which are quite frankly sumptuous beyond compare - so much love, care and attention has been lavished upon almost every scene virtually without exception that this is a film that even those without any interest in the series could sit back and enjoy simply by taking in the expressive animation and incredible backdrops.  This is, of course, only accentuated for anyone who has spent any time in London - there are endless moments that cause your jaw to drop as you see a location you've visited in real life recreated in stunning, vivid and beautiful detail within K-ON's animated world, and it's something that never becomes tiresome throughout the whole time the film spends in our capital.  Whether it's the taxis or the underground stations, this is London at its most beautiful... heck, it's even relatively quiet and full of polite, helpful Londoners over the course of the movie, which in itself is something to be cherished!

As a completely unique story outside of the scope of the original manga from which the series is derived, the film arguably struggles a little more in terms of delivering humour - there are some funny moments, well-written dialogue and snappy gags for sure, but perhaps not as many as there should be for a film which runs close to two hours.  Indeed, our one complaint about the film as a whole is that its opening and closing acts both threaten to outstay their welcome, with a tendency to drag their feet and overbake things when a brisker pace could have shaved minutes off the running time and made the entire experience flow better.

This isn't K-ON at its best as a slice of life comedy series then, nor does it hit the emotional heights of parts of its second season despite clearly trying to do so by leaning heavily on the forthcoming separation of Azusa and her bandmates upon their graduation.  Still, it has more than enough to satisfy fans of the series as it continues to make full use of the charm and energy of its characters to bring fun into even the most mundane of activities, and as a work of high-quality animation it's almost beyond compare and without rival in modern anime.  It's the visual flourishes and attention to detail which ultimately almost obscures the lack of content in places to make parts of the film a must-watch for any fan not just of anime, but animation full stop.  London has never looked this good before, and possibly never will again - even the Olympics can't match the feel-good factor that comes from seeing England's capital city depicted as it is here.

K-ON! The Movie was screened in Glasgow as part of Scotland Loves Anime 2012

7
Its pace is a little slow at times and this isn't K-ON at its best, but visually this film is simply jaw-dropping and well worth viewing for its lavish depiction of London alone.
COMMENT AND DISCUSS
blog comments powered by Disqus