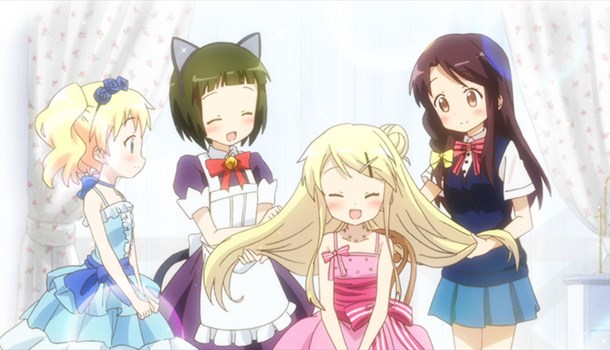 “Good day sir, may I take your order please?” “Yes, I’ll have a slice of life please!”

That’s right, it’s time for yet another drop in the seemingly endless ocean of slice of life shows. The drop in question is Kinmoza, currently streaming on Crunchyroll. With so many slice of life series around (this season has at least four I can think of) it’s becoming increasingly hard for any of them to stand out. It’s therefore a real pleasure to discover that Kinmoza is actually rather good!

The first episode is a little misleading as, rather than starting as it means to go on, it instead is essentially a prequel to the series proper and focuses solely on establishing the friendship between our two leads. Japanese Shinobu has entered a home stay program and been flown off to the UK to stay with a family for several weeks (an extremely well-off family too by the looks of the house they live in, not to mention the size of the place). Whilst there she’s introduced to Alice, the family’s young daughter, and the two gradually become friends. Watching the pair bond throughout this opening episode is wonderfully heart-warming, despite things being just a little too perfect, and it’s a really strong introduction to the characters. For some reason the first episode feels very Ghibli-esque, though it’s difficult to say why as it’s unlike their works both visually and thematically. It’s perhaps that the episode makes such good use of those smaller character moments that tend to be so well done in Ghibli’s work - little moments like the two girls bonding over some baking or Alice comparing Shinobu to a doll just have that same feel to them.

Following this idyllic introduction we’re whisked off back to Japan for the more familiar settings of a Japanese high school. The real slice of life stuff starts here as Alice follows Shinobu back to Japan and is quickly made welcome amongst Shinobu’s friends. The gang is then further expanded as Alice’s friend Karen arrives in Japan to join in the fun (sporting a very fine jacket I might add). With the gang all present its time for the traditional rambling adventures that slice of life shows love as the gang runs through everything from how to make friends to how your height affects the size of your bust to Shinobu’s addiction to blonde girls. The series does a great job in making sure that nothing outstays it’s welcome, and everything moves along at a fair old place with a good amount of gags spread throughout. Far from the Ghibli feel of the first episode, the later instalments feel much more reminiscent of one of the classics of this genre – Azumanga Daioh. All you really need to add are a few title cards and the format would be near identical, though the Kinmoza doesn’t quite have Azumanga’s surrealist twist.

The series won’t win any awards on a technical level but the simple art style and effective use of a limited colour palette still look pretty great. The voice cast do a great job (though sadly the Brits of the series still speak with strong Japanese accents even when speaking English, but we’ll forgive them for that) and a pair of fun opening and ending themes round out the package.

Kinmoza is just a fun show to watch, with a refreshingly total lack of pretentiousness. It just wants to do light hearted comedy and it does it incredibly well; if nothing else the series will send you off with a smile of your face and feeling a little more relaxed after a hard day’s work, which is no bad thing. Just sit back, relax and enjoy!

You can currently watch KINMOZA! in streaming form on Crunchyroll.

7
Not groundbreaking but still great fun.