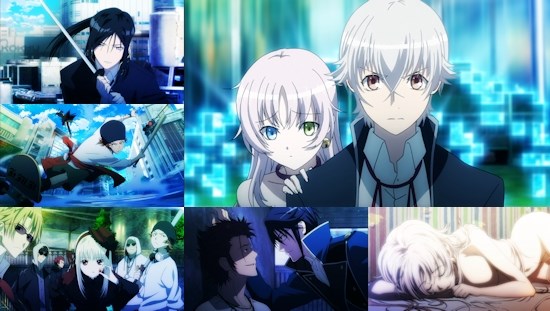 It's never a good idea to get yourself involved in the middle of gang warfare, especially when you're a meek and mild high school student like Yashiro Isana; "Shiro" to his friends. Beyond a lazy streak and an unwillingness to get too involved in the midst of a forthcoming school festival however, Shiro is no troublemaker... a fact which makes the appearance of someone looking identical to him who has been caught on camera committing a senseless murder all the more baffling.

It's the video resulting from this heinous crime that lands Shiro into all sorts of trouble. The next thing he knows a suave, sword-wielding man is all set to assassinate him for his crime, and even though some quick thinking saves him from this fate his pursuer - ironically known as Kuro - isn't about to give up on his target even if he's willing to cut Shiro some slack and give him some time to clear his name. When it turns out that Shiro's trusty feline companion is actually a heterochromic cat girl who enjoys nothing more than running around naked, even more headaches build up for our protagonist, but this isn't the half of it - it seems that he's become embroiled in a turf war between seven clans, each with their own king, at the top of whom is the Golden King who rules over all of Japan. Is Isana really the rumoured inviolable "Colourless King" that could sit above them all in terms of importance? And where does that leave the Burger King in all this?

With so many different factions, and a variety of individuals within them before you even consider those involved outside of these organisations, there are clearly a vast number of stories to be told and character histories to be delved into - a fact which makes K's story-telling all the more frustrating. What starts out as an intriguing story which leaves the viewer guessing as to much of what's going on and looking forward to some big revelations as to the state of its world slowly but surely mires itself in a jumbled, disjointed narrative that doesn't seem to know where to focus its attention and when.

The result is a series that promises much but delivers little - there are what seem to be some fascinating characters on show here, but most them aren't given anything like enough time or focus to be fleshed out to a satisfying degree, and whenever you feel like you might be about to gain an understanding of a particular individual or group's motivations, you're suddenly carted off elsewhere for the same ultimately meaningless build-up elsewhere in the world.

Even ignoring those possibilities and looking at the big picture, it would be charitable to call the series a slow-burner - it takes over half of the series to pull back the curtain on many of its plot points, meaning that many of them feel unspectacular when they are revealed thanks to the overly long build-up towards them. In fairness, there are some great moments to be found across the series - the true purpose of Neko's place (beyond all that voluptuous female flesh for the audience to gawp at in one of K's sudden moments of needless fan service) is a great moment where various things suddenly click into place, and it's something that the show could sorely do with more of.

Thankfully, the show is far more of a treat for the eyes than it is the mind - K has no shortage of excellent character designs to throw into its original story, from Shiro himself through to the various clans that range in uniform from militaristic garb through to street wear. It makes the various factions easy to decipher and they all look the part in ways which suit the organisations they represent too, to bring some coherency to a series which threatens to slip its shackles all too frequently. These designs are matched by the show's wider aesthetic - admittedly GoHands' saturated, filtered look that they've opted for in a number of outings in recent years isn't to everybody's taste (we've often joked about it being "anime watched through Instagram" here at UK Anime), but it mostly works well here to make for an eye-catching series throughout. Sadly, the animation quality beneath that filtered look can be a little more variable - some of its action scenes are stunning, but others are embarrassingly static or low-key to leave us with an uneven treatment that apes K's story-telling.

As we've previously investigated on this very site, Kazé's UK release of this series offers a rather unique disc configuration, using three DVDs but just one Blu-Ray for its combo pack offering. We won't delve too deep into the technicalities of this strategy (we'll leave that for the previously linked article), but in a nutshell you're very unlikely to see any notable reduction in audio or video quality from this move to a single Blu-Ray disc - the shows looks as good as you'd hope and expect across the entire series and we ultimately had no gripes with the Blu-Ray review disc we received, as K remains a pretty good-looking series even when its entirety is crammed onto a 50GB disc.

In terms of audio, both English and Japanese language tracks do a fine job of representing the series and its characters - the Japanese audio is perhaps a little more engaging, but it's a close-run thing and both efforts are perfectly acceptable. Behind the dialogue and on-screen events sits an enjoyable soundtrack which urges things along or calms things down with a perfect tempo, providing to be an ideal partner for a series of this ilk that is worthy of at least some praise in its own right.

Although it looks the part and has some compelling moments, these positives only ultimately serve to shed on light on K's failings - it has everything in place to spin a good yarn but only succeeds in stumbling over it again and again. Whether it's simply too ambitious and biting off more than it can chew is an argument that could certainly be a valid one, but regardless it greatly reduces the impact of a series that could - and probably should - have offered so much more. There will be enough for some viewers to latch onto regardless of this in terms of story or characters, but as an original series there was plenty of unexplored scope for K to appeal to everyone.

English and Japanese stereo audio with English subtitle.  This release has no bonus content.

6
It may catch the eye, but K fails to engage any of the other senses thanks to a disjointed and largely dull story.
LATEST REVIEWS