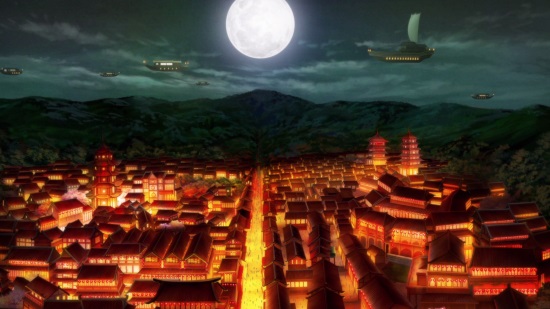 Now I know what you’re all thinking. A new show by Gonzo, the studio that hasn’t produced a decent show in nearly ten years following their major financial troubles in 2009? Well, don’t click away just yet because whilst it has been admittedly some time since Gonzo brought the goods (and may be again since their other offerings for the year include an adaptation of the Conception video game series which has a whole host of ways it can go wrong…), they might be onto something here. So pack your bags because we’re off on a hot-springs tour of the spirit world.

Young college student Aoi has always been able to see the various spirits that linger in the world. Seeing most of them as weak and in need of succour she often takes to feeding them as she goes about her day. Her life is flipped upside down however, after she accepts a gift from one of the spirits and finds herself dragged to the spirit world. Here, she finds that her grandfather was a rather infamous visitor to this world who, after a spending spree-slash-rampage through Tenjin’ya, one of the world's premier inns, he offered up Aoi’s hand in marriage to the inn’s ogre master.

Not one to take her situation lightly, Aoi strikes a deal that she will find work in the spirit-world and will pay back her grandfather's debt through labour. But what can a lone human girl offer to a host of spirits who either hate or want to eat her? Good thing then that she’s spent her life feeding hungry spirits with something they love…

Kakuriyo, despite a concept that sounds like a whole pile of the dullest anime tropes rolled into one, is actually a really solid series. Aoi is a bit of a stereotype it’s true and if we’re being honest her habit of getting into trouble that requires a big strong man to come and save her is a bit to-often repeated and more than a little outdated here. However she’s an undeniably charming character and as she goes about sticking her nose into everyone’s business trying to solve the wrongs of the world you can’t help but root for her.

Tenjin’ya’s ogre master (which is the only name he’s ever given), drops any hint of the stern jilted lover rather comically fast and within the space of an episode he’s become a staunch supporter of Aoi’s. Whilst this transition does seem more than a little improbable (and isn’t exactly the best character development in the world), it does make him a much more likeable character and as he begins to build a much more genuine romance with Aoi they become a couple that it’s easy to get quite invested in.

The spirit world where the series takes place is the true star of the show here though. From the huge variety of designs on offer from the more classic tengu to the tiny kappa Aoi names Chibi there's a lot to offer here with the series offsetting the more traditional descriptions of some of these beings by having them being able to swap between humanoid and creature form at will though this does stretch belief a little once a full size human reveals that they’re actually a tiny spider…

On top of the characters themselves though Gonzo have excelled themselves the design of the show. The normal backgrounds are all really good but once the series goes outside there are some vistas of the world, especially at night that are truly jaw-dropping and frankly these moments out-do the visuals of any other series this year. You would never guess that Yoshiko Okuda had never directed a full show before, nor that Gonzo were involved in this production given their more recent offerings.

Elsewhere Nao Toyama does the heavy lifting for the voice actors performing not of Aoi but also the opening theme – only fitting for one of the members of Macross Delta’s Walkurie – and does a great job at both. As is critically important in these shows she’s particularly good when bouncing off her male co-stars with veteran Katsuyuki Konishi (famous to many as the voice of a variety of Pokemon even in the English dub of the show) as Odanna and Shun’ichi Toki (probably most famous as Yuri on Ice’s Leo) as the fox-spirit Ginji.

If there’s a downside to the show it comes in its second half. When Aoi is whisked away to another inn with a whole new cast of characters it’s pretty disappointing that she show doesn’t really seem to have any ambition to develop Aoi’s character as she basically just carries on like nothing has really changed whilst the series scrambles to bring in a totally unnecessary arc-plot involving a ceremony that will prevent a huge natural disaster which feels totally at odds with the fun little romance show about cooking. There are still some good things happening here don’t get me wrong but the new characters don’t stand a chance of living up to the cast of the first half and Aoi’s refusal to really do anything about her situation other than what she’s asked to do is frustrating to say the least.

But ultimately, the charm and overall visual style of the show can’t be denied and Kakuriyo is definitely a show to watch. Think of it as a much-superior version of shows like Kamisama Kiss though definitely below the incredible Fruits Basket which also uses similar character beats. This is certainly the strongest show in this niche genre to have come out in some time and you’ll find a lot to love here.

8
Gonzo is back on form!
COMMENT AND DISCUSS
blog comments powered by Disqus