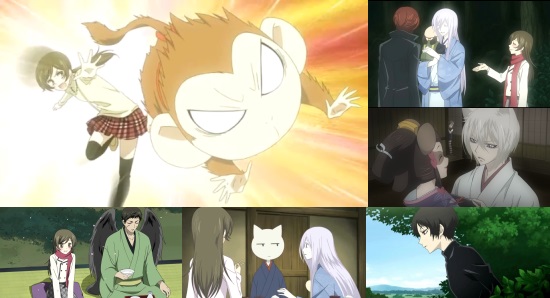 The first season of Kamisama Kiss was a charming if unmemorable little show from the director of Fruits Basket telling the story of Nanami a young girl who is granted the title and powers of a god after losing her home. Now its second season is hitting the UK, so its time to see if this shoujo series can wrap things up (hint – the original manga ended almost a year after the broadcast of the last episode).

Following on from the events of season one things have settled down a bit at the shrine, with the gang all settled down into day-to-day life until that short-lived peace is shattered by the arrival of the flamboyant Otohiko. Otohiko advises that Nanami has been invited to the yearly gathering of the gods, the divine assembly, so long as she can pass a test to prove her godhood. Whilst Tomoe stands firmly against Nanami going she realises that this could be an opportunity for her to learn more about Tomoe’s past and to seek the missing god Mikage. Following that, it’s off to the mysterious mountain stronghold of the Tengu as the succession of the ruling clan lies in doubt and Nanami could well be the only one who can find a path to the truth!

When Kamisama Kiss does something right it really works well, and what it does best of all is some truly laugh-out loud character-driven comedy which works wonderfully well thanks to the broad archetypes of its characters which are often played slightly at odds with their traditional positions in the series - Fox-spirit Tomoe for example is very tsundere which is normally a female character trait in anime.

It’s a bit of a shame then that this great comedy is sandwiched between several very dull and plodding plot arcs which don’t really go anywhere. Nanami’s visit to the Divine Assembly for example sounded like it would be great and the brief introductions we get to some of the other gods and what makes them tick is brilliant, but rather than focus on all this potential Nanami spends half the arc rescuing a new character from the underworld (a demon called Asura whose story literally goes nowhere despite being present throughout the series – if there was a plot from the manga that needed to be cut it was this one which seems to have no real bearing on anything and is left hanging) and the other half thinking about why the boy she likes doesn’t seem to like her back. Admittedly this is a shoujo series but frankly these elements, along with anything else the series attempts to do seriously, just ends up feeling excessive and dull - why aren’t you trying to make me laugh anymore?

Fortunately there are a few gems here and there, particularly with the always fascinating depictions of Shinto and Buddhist concepts, and the final story arc is a showcase of how the series should perhaps have been throughout, proving both hilarious and touching while featuring a giant fluffy sheep! It’s just a shame there isn’t more of it. To be fair the series would probably have fared much better if it had followed straight on from season one rather than debuting over two years later, and MVM Entertainment would have done it more justice with either a speedier release or some kind of Blu-ray re-release of season one or complete collection of the entire series if it were possible.

On a technical level things do fare better. Opening theme Kamisama no Kamisama is a brilliantly catchy number with some really fun animation to accompany it, and the show as a whole looks good in its own stylised fashion with lots of neat visual quirks especially when the series is trying to make you laugh. The character designs from the first series still work and the new characters are mostly pretty good too, though there’s much less inventiveness than there was in the first season.

As far as things go then it must be said that this is a step down from Kamisama Kiss' first season due to the aforementioned attempts to make things more serious, but in terms of this being a release for a presently under-represented genre (at present anyway, MVM Entertainment’s release of the excellent Skip Beat later this year should help solve this issue), then Kamisama Kiss is going to be a pretty solid show for those looking for their latest shoujo fix once they’ve worn out their Vampire Knight discs. All fans will need to wonder is whether the UK will ever get to see up any of the three sets of OVAs.

English and Japanese audio with English subtitles. Extras consist of clean opening and closing credits, and two US cast commentaries.

5
A solid show that doesn't quite capture the spirit of the first season.
COMMENT AND DISCUSS
blog comments powered by Disqus