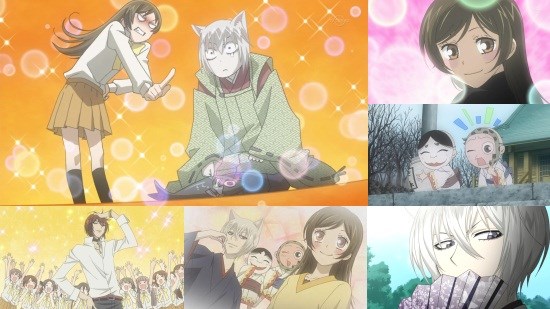 Shoujo series have always gotten the short end of the stick over here in the UK, where even big name titles like Nana have never been picked up. In order to reach our sovereign shores, shoujo shows generally need to have some kind of supernatural/action element or skew much more towards comedy rather than any kind of romance. It’s no surprise therefore, that Kamisama Kiss, the latest shoujo work to be released from MVM Entertainment, is a series that plays to this with a nice juicy supernatural story.

Momozono Nanami is in a bit of a pickle. Abandoned by her father and then chased onto the streets by the assorted folks he owes money to, she has a pretty dismal future ahead of her. Luckily, providence shines upon her as she chances upon a man who has been chased up a tree by a small dog. After Nanami leaps to his rescue he offers her a place to stay. Given her predicament Nanami doesn’t ask too many questions (though one or two relevant ones for a young girl to ask a strange male do spring to mind....) and upon arrival discovers that she’s been suckered into taking over as the god of a small shrine whose previous god (no prizes for guessing who), did a runner 20 years ago, leaving things in the hands of the shrine's other occupants.  Unfortunately for Nanami they are a somewhat eclectic bunch including Tomoe, a fox spirit who is fiercely loyal to the shrine's former master, and two will-o'-the-wisp Onikiri and Kotetsu who wear festival masks at all times.

From this point on, Nanami finds herself in the path of all manner of supernatural creatures who generally want to take advantage of this human who has become a god in some way. Fortunate for her then that Tomoe turns out to be protective, powerful and, incidentally, rather handsome. As you might expect then, dealing with the duties of a land god falls out of the way fairly swiftly in the pursuit of love with the mysterious fox spirit.

I have to say that I wasn’t expecting much from Kamisama Kiss - however, I was pleasantly surprised to find that it’s actually a pretty fun series. Admittedly the characters are all the kind of one-note stereotypes that we’ve seen a dozen times over, but the series has a really good sense of humour that it uses to keep things moving. No matter what’s happening in any given episode you’re never far from Tomoe turning someone into an animal and threatening to eat them, or seeing the king of the ocean's wife cow him into submission with a glare. It also helps that the majority of stories are kept strictly within a single episode, meaning that nothing is really in danger of outstaying its welcome. Impressively, even episodes with the most tired and dull of set-ups, such as Nanami being ill and someone having to pretend to be her at school, get a new lease of life through the show's comedy.

The series also boasts a pair of really strong theme songs, with the opening theme - Kamisama Hajimemashite by Hanae - proving to be particularly great.  Whilst the character designs for the leading characters are pretty ordinary, the yokai designs are really good fun and pretty interesting. I was an especially huge fan of the pairs of spirits who run each of the various shrines, which range from Nanami’s will-o'-the-wisps to a pair of sea slugs for the sea kingdom. The concepts behind them are all really neat little twists on classic Japanese folklore and they’re invariably fun. One thing you may notice when watching the series is that something about it looks and feels pretty familiar, almost like Fruits Basket. Investigating this further after watching the series, it turns out that this shouldn’t be too much of a surprise as both series spring from director Akitaro Daichi.

Sadly, one thing that he hasn’t brought with him from Fruits Basket is the inherent charm of that series. Whilst Kamisama Kiss does try to tug at the heart strings in later episodes there’s never any real emotion to connect to (whereas Fruits Basket can have me crying like a baby). It’s not a major issue as the comedy is so good, but it does mean that the romance side of the story never really gets any momentum behind it. What the director has brought with him however appears to be the budget of a series from ten years ago - Daichi does his best, but the animation quality on the whole is really pretty poor, with what feels like 80% of the series comprising of dialogue over still shots and close-ups. Yes, these are well done and the animation rarely goes off-model (making the series very good for anyone needing screen shots for a review, say....) but even for a shoujo series with a low action quota (which sadly makes the issue much more noticeable) something better would be nice. Certainly more than one person has lamented the lack of a Blu-Ray release for the show in the UK, but honestly I very much doubt the extra cost would be worth it given the state of the visuals. The US dub I must say is also one of the worst I’ve had to listen to in a long time, with the normally okay Luci Christian in particular producing a wince-inducing imitation of the narrator from the Japanese dub.

Kamisama Kiss isn’t a bad series by any stretch - certainly, the UK’s shoujo fans will be pleased with this latest release, as will anyone who’s been picking up the on-going manga series. Will it appeal to everyone? I think there’s enough comedy that people will enjoy it once they get past those traditional shoujo trappings. I don’t know that I can recommend a day one purchase for everyone - not while the vastly superior Fruits Basket, also from MVM Entertainment is still available anyway - but it’s certainly worth a look if only to shore up support for a genre that tends to be overlooked in the UK market.