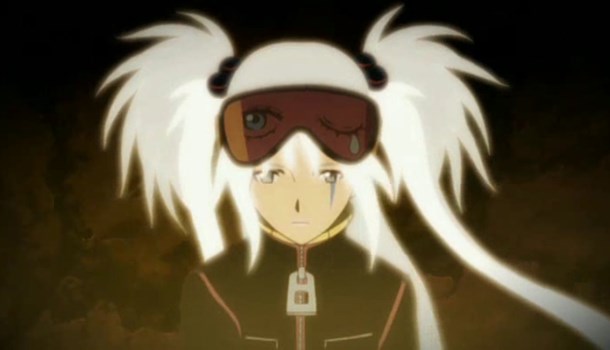 Much has been made of Manga’s latest release. Hailed as a cross between Batman and The Crow, this supernatural tale of a Japanese super-hero certainly grabs your attention from the start.

Utilising some of the best CGI that I’ve seen to date, the opening scene is a stunning aerial dogfight between two beings that can change shape from sleek jets to humanoid warriors, set across a moonlit sky, weaving in and out of a majestic neon cityscape. From this point on, the action never lets up.

I tried to summarise the plot, but the press release does a better job than I can:

The setting is modern day Tokyo, where humans, spirits, ghostly apparitions and demons – both seen and unseen – co-exist in two overlapping dimensions. For time immemorial the balance and order between the two dimensions has been maintained by a guardian known as the Karas, a raven-like creature, and its masters. But now that balance is under threat from a former Karas named Eko. Disgusted by human arrogance, Eko has turned his back on the ancient laws he helped uphold for so long and is determined to seize power and bring order to the city's streets through force by leading a group of mechanized demons in an attack against the humans. Standing against Eko is Yurine, a spiritual entity who represents the will of the people, accompanied by a newly risen Karas of her own.

The plot for Karas is an odd one. Never fully explained on the screen, you really do rely on the 24 page comic book that comes with the DVD (and above synopsis) to really understand the whole premise, and that’s a bit of a failing.

There are problems with the dub too – much of the demon dialogue is totally incomprehensible, and you have to rely on the subtitles to follow conversations. This makes all the money spent on the English stars a bit of a waste, as I was forced into watching the Japanese version by the poor voice distortion.

You’ll also be reliant on the subtitle track to follow the various locations. The Japanese script appears on screen, but isn’t translated for the English dub track, which just left me hovering my finger over the subtitle button. Very irritating.

For all its technical failings, the film does treat your lucky orbs to some incredible animation, making the film an experience to rival Appleseed. There’s a lot of detail in each of the characters, and there are hints of a much larger story, but the running time doesn’t allow for much exposition.

The direction, whilst amazing to watch, can be confusing. There are times when its hard to understand what’s happening on the screen, but repeated viewings have helped to clear things up.

The abrupt ending of this disc was also unexpected, and I’ve since heard rumours of a second release to close the story. Certainly, nothing is resolved by the time the credits roll, and I was left feeling that this was more of a first episode than a stand-alone feature.

In summary, Karas is a stunning movie, but it suffers from choppy narrative and glaring technical errors that really could have been avoided.