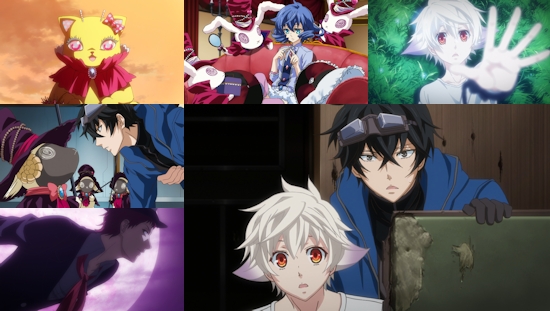 The circus might not be the entertainment powerhouse that it once was in these days of television and video games, but the imagery that it has provided remains enduring right the way down to the sinister undertones that such carnivals have, for whatever reason, come to encompass. Given its title, it's no surprise to find this anime adaptation of popular fantasy-action manga Karneval borrowing at least some of these concepts for its own ends.

Our journey begins with an unusual boy named Nai, who seems to have gotten himself into a spot of bother while searching for a friend of his known as Karoku - a friend whose bracelet he wears with both pride and hope as he seeks to return it to his rightful owner. What Nai doesn't seem to have realised is that this bracelet is also the source of his troubles, as it brings him to the attention of unwanted elements thanks to it purportedly belonging to a group known as Circus, the National Defence Agency who also happen to be rather handy at entertaining people with tricks and stunts once they've finished bringing criminals and the like to justice.

When Nai is rescued - albeit entirely accidentally - by Gareki, a young man with an unspoken goal of his own, the two of them wind up as unlikely comrades in an adventure that brings them into Circus' fold. The branch of Circus Nai and Gareki reside with have no knowledge of Karoku or who he might be, but as they find themselves drawn into the agency's battles to rid the world of "evolved" humans known as Varuga they do come to learn the truth about Nai's existence, while Gareki also has to reveal some of the secrets which he's been keeping close to his heart.

Let's start with the one big positive of this anime adaptation of Karneval, that being the visual appeal of the series - its character designs are almost universally attractive from its main cast down to its adorable miniature mechanical sheep and rabbits (either of which should be the clear evolution of the Roomba in the home automation sector), and the overall quality of the production is pretty slick and colourful. If you're looking to take in Karneval's story in an animated form rather than via its original manga treatment which will be coming soon from Yen Press, this is certainly an attractive way of doing so.

Unfortunately, that's where our positivity towards Karneval ends. That isn't to say that the series does anything wrong - it's absolutely proficient at everything it sets out to do in terms of story-telling, comedy and action - the trouble is that none of what it presents is particularly interesting. There are some strong moments and reveals scattered across the series, but these occurrences are too few and far between and much of the connective tissue between those eye-opening moments is meandering and instantly forgettable. Even its attempts to break out into major action scenes are largely competent but far from jaw-dropping, leaving you with the impression that the entire endeavour is missing a certain, indefinable something.

In terms of presentation, we have no qualms about this UK Blu-ray release - it sports a decent English dub, its subtitles are solid, and video and audio quality are both great - add in the usual small but notable smattering of extras and this package contains everything that you might expect of it. In other words, if you are a fan of the franchise, then you won't be disappointed.

Overall, Karneval is a series that is actually pretty difficult to write about - as we've mentioned it doesn't have any glaring issues in its narrative or presentation so we can't pin any particular faults in what it does, yet at the same time we're really struggling to find anything notable to say about its story or what it has to offer the viewer either. Thankfully, there is a word for just such an offering: that word is "mediocre", and it's been a while since we've last seen a series that fits that descriptor so succinctly. If you already love Karneval from its source material then this anime adaptation will possibly scratch an itch for you, but if you don't have any existing fondness for its world or characters then there's very little here that will succeed in drawing you into it.

5
A competent anime adaptation that doesn't succeed in doing anything to rise above mediocrity and stand out from the crowd.
COMMENT AND DISCUSS
blog comments powered by Disqus