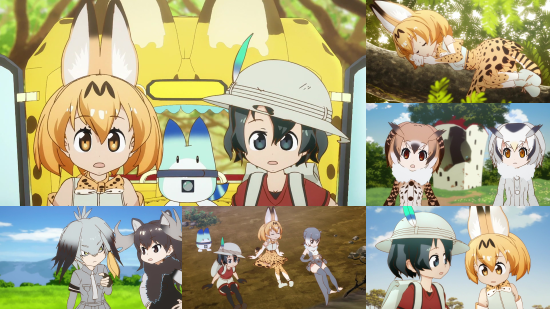 If I have told myself once, I have told myself a hundred times. Never judge a series too soon. I have been bamboozled many times in the past by this rule and series which portray themselves as being “cute”. This is a lesson those of us who survived Puella Magi Madoka Magica will remember. Beware the series that starts innocently.

This review is less a review, and more my tale of discovery with a review tacked onto the end. I hope you enjoy reading why I betrayed my universal love for anything starring girls with animal features. This is the fourth time that I have tried to write something coherent about this show. The first time I was overly harsh after watching two episodes, as at the beginning Kemono Friends is - being completely honest - a bit boring. The simplistic CGI put me off, and it felt like a series aimed at the very young. Animal ears or not, it didn’t sit well with me. (See, I do have some standards)

But then episode three happened. I then continued the series, and I was ready to write once again, and then episode seven happened. I watched more, and began once more to write. But, lo, episodes 11 and 12 happened, and I find myself where I am today after the conclusion to the series.

Now, I find that there are some tropes in anime when it comes to episode numbers. Episode seven tends to be when it’s the perfect time for some hot spring action, or beach action, or anything involving lingerie of some description. I am quite proud to announce that Kemono Friends does not disappoint in this regard. However, another trope exists now, as writ large by Madoka Magica, and that is "the episode 3 reveal". What happens during episode three is that a series can change tack. In the case of Madoka, that series changed from being a cute magical girl series into a much more tragic beast with actual consequences. In Kemono Friends we go from a series where we have animal girls having fun, adventuring and trying to find out what a human is to a series whose true nature, a post-apocalyptic series, comes to light. Rather than being a nature preserve for anthropomorphised animals, Japari Park is the ruins of a Jurassic Park-esque amusement park.

Japari Park, home to a mountain emitting a substance called Sandstar, is the preserve of many species of animals who are homed in their own habitats across the park. From the serval cats of the Savannah, to the foxes of the snowy mountains, Japari Park literally has everything. Thanks to the Sandstar, whose particles reanimate any living or dead animal into human form, Japari Park is populated by human-form animals also known as friends and, in the park’s heyday, these friends were able to meet human tourists.

However, something happened. Along with the benign Sandstar emitted during eruptions, something else emerged: Ceruleans. These creatures target human and friend alike, absorbing them, feeding off them and leaving only a shell. Because of these creatures, Japari Park was abandoned, the guides and administration left, and the park was left to fall into ruin.

Every animal, every friend, in Japari Park, has their own place to live. For Serval, who is a serval cat (and as disclosed in the middle of the episode, serval cats are mostly nocturnal and live in savannahs) she likes to live in the desert. One day, while pouncing along, doing her thing, the Sandstar volcano erupts and Serval discovers a strange new friend who has appeared beside a hat. This creature is friend-shaped, lacks a tail, the ears, camouflage and defensive mechanisms... what the hell is she? Bag, as she becomes named after her rucksack, is a human, except she has no memories and she knows nothing about what she is. So begins the incredible journey, as Bag, Serval and an automated guide robot that they call “Lucky” seek to find where Bag came from, what she is and where her habitat is.

The premise is simple, and the art style and the CGI animation is more than simple, but there's something about this story... the friends and the dialogue just wins you over. It is rather hard to describe actually. The combination of the cute character designs, the enthusiasm of the voice acting (Bag climbing a tree won me over in particular) and the other friends and their interactions just filled me with happiness. Every episode... happiness. That is literally it. Having seen the entire series, there isn’t any big surprise in the story and other than a few twists the series is just a smile. Simple as that.

The big issue which does and did put me off, is the incredibly simplistic art style. The series is entirely CG animated, and it has been produced on a very low budget. However, if you give Kemono Friends a chance, it might just surprise you. It sure surprised me.

You can currently watch Kemono Friends in streaming form on Crunchyroll.