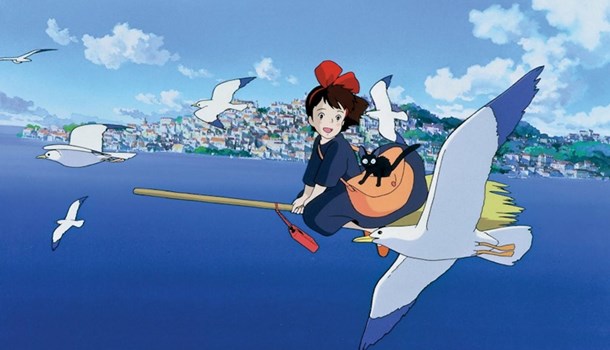 Kiki, along with Castle in the Sky, marks the first wave of the Studio Ghibli invasion into the UK, and if anything was ever going to widen the appeal of anime in this country, this is undoubtedly it.

Based on the children's book by Eiko Kadono and released in 1989, the story follows the exploits of coming-of-age witch kiki (voiced by a 13 year old Kirsten Dunst) and her first real steps into the wider world. As a witch she is bound to leave her home in her 13th year and find a place in the world where she can practice her craft.

Kiki's strength lies in the simplicity of its story - there are no monsters, insurmountable obstacles or gunfights, just a beautiful observation of the struggles we all make as we begin our ascent into adulthood.

The story follows our heroine as she journeys away from her home and into her new life in the city, where she deals with the new and unfamiliar, something anyone watching can relate to. Joining her on this adventure is her cat, Jiji (voiced by Phil Hartman of Simpson's fame) who injects much of the comedic element, and his presence as Kiki's friend and companion is reminiscent of Lyra's Pantalaimon in Phillip Pullman's His Dark Materials trilogy.

In terms of production values, the screengrabs don't really do this justice. Though the character designs are simple enough, the animation is fluid and skilfully directed, especially the flight scenes. Even the movement of the characters exudes a charm and expression of personality that any Disney film would be proud of. The music is also of a high quality - fans of the film will note that the original J-pop score has been replaced by an American equivalent, but its still of a high quality.

Of the 2 current releases by Buena Vista, this is by far my favourite. The warmth and charm of the story make this a perfect winter treat for the kids, setting the tone for a hearty Christmas and an optimistic look forward to the new year.