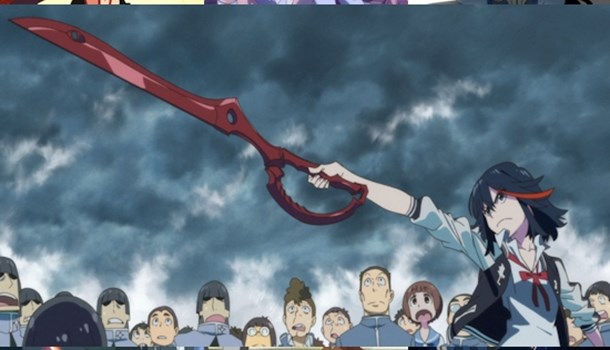 Having grown used to a long gap between enjoying a series in its streaming form and getting our grubby mitts on a physical copy of said series, it feels almost inconceivable that having shouted our love of Kill la Kill from the rooftops in March, here we are in November with the first instalment of the show available in the UK on DVD and Blu-ray. Nonetheless, it's a coup which Anime Limited have managed to pull off, and with a Collector's Edition treatment no less, so is this one of the year's killer releases?

There's certainly no doubting Kill la Kill's staff credentials - its studio, Trigger, might be new (albeit already well-known thanks to the heady combination of Inferno Cop and Little Witch Academia), but with director Hiroyuki Imaishi and writer Kazuki Nakashima reunited from their previous work at GAINAX on Gurren Lagann for Trigger's first TV anime outing, there's an obvious point of comparison that serves this series in good stead - if you enjoyed the blend of insanity, action and high tension that Gurren Lagann offered, then you're guaranteed to find more of the same here.

Kill la Kill wastes no time in introducing us to Honnouji Academy, a monolithic school which towers over everything beneath it. Much like its architecture, the school's student body are also towered over by a single entity - student council president Satsuki Kiryuin who, together with the so-called "Elite Four" who assist her on the council, reigns over the entire establishment with an iron fist.

This show of strength is not merely psychological however, but part of a carefully honed and controlled system within the school which revolves entirely around the uniforms provided to each student. Known as "Goku uniforms", these items of clothing imbue the wearer with impressive powers - while those on the bottom rung of the school's social ladder have nothing but normal clothing to call their own (and live in the slums as a result of their lack of status), others enjoy the relative benefits of everything from one through to three-star uniforms, the latter of which are only provided to the Elite Four. This system of rule ensures that only the most valued students have any real power, and that everybody knows their place...

...that is, until a rebel transfer student rolls into town and threatens to topple the entire thing. Ryuko Matoi has no interest in her position or status, for she is a girl on a mission - she wants to find out who was responsible for the death of her father, and she's willing to go to any lengths to discover the truth.

Satsuki seems to be the obvious target for her wrath, but even a delinquent who knows how to look after herself is going to struggle to break through the layers of protection she has built up around her. Luckily for Ryuko, the work which led to her father's demise also proves to be her key to victory - a talking, blood-sucking school uniform that can use that blood to provide her with unimaginable powers which trump even the strongest Goku uniforms within Honnouji Academy. With her new best friend Mako in tow and a giant Scissor over her shoulder, so Ryuko's fight to reach her goal, and the truth, begins.

If that synopsis all sounds very serious... well, it is, to a certain degree - Kill la Kill knows when to treat its subject matter with a straight face (or at least, as much as you can keep one while relaying a story revolving around talking, blood-sucking clothes) to extract the maximum pathos and drama from its tale. That said, the series is also considerate of the fact that it doesn't need to keep that straight face too often, leaving the majority of the first nine episodes on these discs to revel in a riot of action and humour that is, quite simply, devastatingly effective.

These early episodes of Kill la Kill are, in many respects, a lesson in how to make an effective animated TV series. Its quick to set up the key tenets of its plot and world, once established its plot moves along at a brisk pace, and each episode is still satisfyingly self-contained even when it's part of a greater whole - the result is a carefully controlled mixture of satisfaction and an overwhelming urge to watch "just one more episode" that makes one of the biggest issues of this first volume of the series the fact that you'll be left craving more. Add a wonderful set of leading characters, many of whom are fleshed out nicely across these initial episodes, and you have yourself a delightful experience that will leave you utterly hooked.

What's perhaps the most impressive of all is how Trigger have taken a clearly limited time and budget and used that time and money masterfully - at times, the series devolves into little more than Flash-quality animation with static cardboard cut-outs, but these cheap cuts are dressed as and used for comedy purposes, in turn leaving the studio room to craft some fantastically eye catching scenes, be it bouts of action or fantastic sweeping views of Honnouji Academy and the surrounding area. In other words, Kill la Kill plays smart rather than hard in its aesthetic, and manages to carve out a wonderfully unique look as a result right down to its huge red title cards which literally becomes part of the scenery as the series progresses.

Both accentuating and bolstering this visual package is the show's music, which is simply sensational. Fresh from his success with Attack on Titan, Sawano Hiroyuki provides a soundtrack that matches the on-screen characters and events beat for beat, whether it's oddball comedy or frenetic majesty. Such is the synergy between sound and visuals that it's hard to imagine Kill la Kill having anything like the same impact if you were to take away its soundtrack, and in an industry where incidental music is often exactly that it's worth noting this impressive achievement.

The only arguably troublesome aspect of Kill la Kill at this point is its relationship with fan service, which occupies a particular strange place in its narrative. On the one hand, it delightfully plays into its skimpy outfits and flashes of underwear as playing a direct role in the story - one of those key tenets of the show we mentioned earlier is that of unashamedly being yourself and having no cares about who or what you are, or how others might view you as a result. On the other, the series occasionally tries to have its cake and eat it - its bouncing breasts that blow in a strong breeze (yes, really) are silly, but there's often a very obviously leering gaze upon these boobs and backsides that leaves you suspecting that the show is trying to cater to that part of the market in a way which actively does disservice to some of its more laudable conceits even if it stops short of outright nudity or lazy titillation.

In terms of this first UK Collector's Edition release, alongside some satisfyingly firm and rigid packaging with eye-catching box art comes a substantial book containing key art and storyboards from the series. In comparison to the somewhat lacklustre book which shipping with the Ultimate Edition of Gurren Lagann, this is far more interesting fare - Imaishi's storyboards are, well, "unique", and this formative look at two aspects of the production process will certainly find favour with fans of the show. Admittedly, it would have been nice to see some interviews with the cast and crew to support this vast collection of imagery, but what we have here certainly feels like a worthwhile package for the price point.

Elsewhere, we certainly have no complaints with the on-disc content for this first volume of the show - on Blu-ray, the video quality is impeccable, audio quality is great (although purists may have preferred LPCM audio to the DTS HD-Master Audio tracks used here), subtitles excellent and the English dub is unspectacular yet passable even if it resides well and truly in the shadow of the performances brought forth by the original Japanese voice cast. Now that an audio sync issue on that English dub in episode four has been fixed for the final retail release, the only flaw here is that the episode numbers on the two discs have been labelled incorrectly, which is the most minor of inconveniences in the grand scheme of things and hardly a show stopper.

Our review of the first five episodes of Kill la Kill in its original streaming form brought forth a ten out of ten score - although I wouldn't quite praise these first nine episodes on Blu-ray to the same heights of perfection, it certainly comes pretty darned close. It's hard to think of another series in recent years that can boast the same vibrancy, flair and panache as Kill la Kill - it oozes confidence and creativity, and you can't help but be swept along in its enthusiasm as you fall in love with its characters and embrace even the barmiest aspects of its premise.

Even on a second viewing, this is a series born not just of loving care, but also an astute attention to what makes a series work and work well, and providing you can see past its bouncing bosoms and exposed flesh - which may be difficult for those not steeped in anime traditions - you'll discover the early reckoning of an incredible achievement that is very much worthy of a Collector's Edition treatment.

9
A hugely entertaining start to a vibrant and confident series, wrapped up in a satisfying physical package.
LATEST REVIEWS