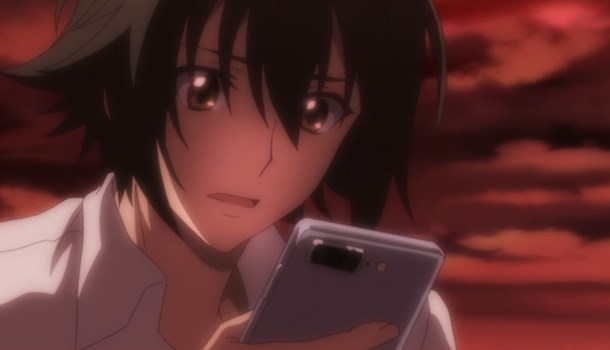 Horror is a funny old thing, being both an extremely popular cult genre and also very difficult to do right or in a fresh way. The glut of deeply average or downright bad horror movies and TV shows, that audiences have to sit through nowadays, is testament to this. Anime is no different in this regard, we get good, bad, and great shows each season of multiple genres - horror being one of the least touched upon of the medium. So when a new one rolls around it’s always exciting to see what new twist the East will being to the genre. About five minutes into Kings' Game I had my answer: Unintentional comedy!

Nobuaki Kanazawa is not blessed with luck. Having just transferred to a new school, and slowly getting to know his classmates, he gets a seriously unwelcome blast from the past: Finding himself plunged into the King's Game of the title, a sadistic and brutal game with no opt-out. A game he has previously survived, and was in-fact the reason he moved schools when the rest of his class died as a result of playing. Nobuaki and his new classmates are bombarded with text messages from the seemingly supernatural 'King' demanding they do various demeaning or unpleasant tasks, and failure to do so will result in their death. With that set up we are launched into what should be a tense and engaging game of survival… But no, with this show what you actually get is a ‘so bad its good’ comedy that manages to fail on just about every level.

I was willing to give this show a chance, even though I read it was was based on a mobile phone novel (whatever one of those is), and one where the writer had the hubris to name the hero after himself at that. After the fist episode I was left in no doubt that this was simultaneously one of the worst series I had ever seen but that I also had to watch the rest of it, because train wrecks like this are hard to take your eyes off.

The plot, while initially intriguing, never gets the chance to properly set up its cast of characters, as the series makes the bizarre choice to flashback Nobuaki's first experience of the game. This leaves one episode taking place in the present and the next two essentially acting as framing devices - to the point where the entire cast seem to spend forever loitering around a park listening to Nobuaki monologue about his tortured past. This also means the present day part of the story - the one we should be invested in, as we were already made aware of how the previous game turned out - never gets to take the fore as it should. As such we end up knowing very little about the nameless people who are being killed off in droves and caring even less when the ones who are named start exploding in geysers of blood.

This being a horror some violence (and sex) is to be expected. Though you will be shocked to hear that the show falls way short on this front, to the point where some of the character deaths had me howling with laughter - so misjudged was the tone. These issues are amplified by the fact that the animation seems totally ill equipped to convey the terror of whatever horrible act is unfolding. The sexual aspect that a lot of schlockier horror movies (that this is definitely along the lines of) lean into is neutered so far, with one girl taking her top off treated as an outrage. The girl in question, Natsuko Honda, may also be the star of the series depending on how they carry on her arc, as the rest of the cast so far have been nothing short of forgettable.

The apparent hero of the piece Nobuaki (named after the author remember) is blander than your average pot noodle and about as useful in a crisis, perhaps even less so. We learn nothing about him in these opening episodes apart from the fact that he has some kind of magical power, and that fact makes the rest of his doomed classmates change their mind about how trustworthy he is every five minutes. The previously mentioned Natusuko is the only other cast member we really get any time with in these episodes, and good grief the writers seem to have had no idea what they wanted from her. The rest of the class are barely even one note, painted as either aggressive jackasses or complete idiots. That last part cannot be stressed enough, this is a group of people so stupid and reactionary they make the cast of Baka and Test look like genius level intellects. This poses a huge problem for the show as there is absolutely no one to root for.

As mentioned the animation is far from great, the show looks cheap. And anytime more than the barest of movement is required the whole thing starts to wobble, characters even seem to be sliding across the backgrounds. The music is also the usual generic stuff, with no effort made to help the creep factor. The opening song “Feed the Fire” by Coldrain is easily the best thing about the show.

This series is sadly shaping up to be another less than stellar entry in the horror anime genre. I couldn't recommend this to anyone who is a fan of the genre, but if you love to watch stuff that’s so bad it’s good then this is for you.

You can watch King's Game: The Animation in streaming form via Crunchyroll.

3
Cheap and nasty. Only for those with a morbid curiosity of what a truly bad anime looks like.
LATEST REVIEWS