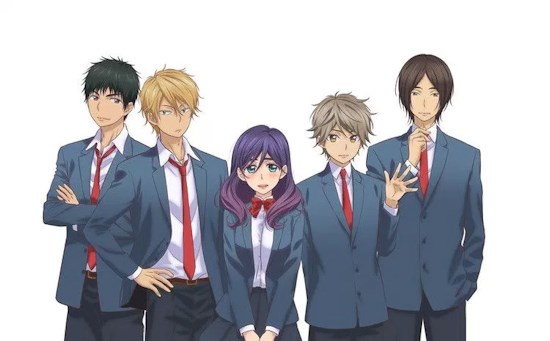 Kiss Him, Not me! Complete Series

Kae Serinuma is something of a stereotypical nerd – obsessed with her love of boys' love, largely ignored by the opposite sex, socially awkward and just a wee bit on the heavy side. This all changes when her favourite anime character dies, the week of mourning that follows, during which she starves herself, leaves her, well, hot. This massively ill advised crash diet has another side effect, Kae finds herself pursued by four handsome young men, and one BL loving Girl, from her class all now having noticed the more attractive figure she cuts. After the initial surprise Kae quickly becomes frustrated with her new attention as she would much rather watch these young men fawn over each other. As things progress with this new group of friends will Kae find true love among her suitors or just a hell of a lot of fanfic fuel.

The harem genre is one that I keep hoping to wake up and find the Japanese government has banned all anime studios from producing until they can do something fresh with it that doesn't involve more extreme nudity. The reverse harem genre, that this show falls under, seems to be in rude health however as this series proves along with the others (Ouron High School Host Club, Fruits Baskets) all showing more wit and charm that about ninety nine percent of the standard girls who are all horrible chasing guy who has no personality hi-jinks we get each season. This show is funny, a key point there, this is the first harem show I have dipped my toe into in years that actually made me laugh consistently but also had a cast who were readily identifiable by something other than their hair colour, bust size or how loudly they could shout.

Something the series also get a huge amount of points for is the central romance or the actual mystery of that romance as the creators do a great job of keeping ambiguity over which one of the boys (or girl) Kae will end up choosing, if any at all. In a genre that has a habit of making it blindingly clear who the main love interest is supposed to be in its key visual or by the end of the first episode, Kiss him, not me! deserves praise from not being that obvious. In fact the guy I had pegged as the one who would win Kae's heart in the end and who seemed to be getting the most development out of the potential love interests, ended up having as much as a chance as any of the cast. My surprise increased once I had finished watching and decided to check out the completed manga (on Crunchyroll for those interested) to see who did end up with who – I was way off the mark with my initial judgement but looking back the clues are there just played very subtlety making for a more satisfying series. Sadly the show follows the well worn path of these genre by providing no resolution to the story, but on the upside that means we made get another series.

The cast, as mentioned, are a likeable bunch and there interactions and reactions to each other provide most of the laughs as opposed to the slapstick usually associated with harem comedies, mercifully no screams of “PERVERT!!!” or mega tonne punches here. Kae is a warm and likeable lead who's endless fan girling makes her a relatable presence for any geek girl or boy, as well as her pervy thoughts when the boys get too close being a gold mine of humour. The boys are all unique enough to be memorable but my favourite two were jockish Nozomu who keeps finding himself forced into acting out Kae's BL fantasies or having his manliness undermined much to his displeasure and the wonderfully innocent Asuma who simply enjoys his new circle of friends until about the last four episodes when his fells for Kae really hit home. Also worth a mention is Shima Nishina a fellow BL enthusiast who joins the cast after the first few episodes upsetting the status quo at that point and generally providing some of the biggest laughs the series had to offer. She is also one of the driving points in an episode about fandom shipping that does a fantastic job of showing just how committed, petty and obsessed fans can be which was the best of the entire run for me.

The an animation is provided by Brains Base who did the similarly flavoured (and utterly fantastic) Princess Jellyfish. This is a lot more basic looking than that show but its well animated and the blu ray transfer is gorgeous.

So is there anything wrong with the series? Well, yes, there is plenty to pick at if you really wanted too – the boys seemingly only being interest in Kae after she loses weight (which is addressd in a slightly ham fisted way), the male characters attitudes and behaviours veer into appalling at times, the lack of a plot or an ending is also an issue, but this is first and foremost a comedy that wants to make you to laugh and have fun and it does so wonderfully, so don't over analyse, sit back and enjoy.

7
A fun, frothy comedy that gives the harem genre a shot in the arm and shows how ones of these shows should be done.
LATEST REVIEWS