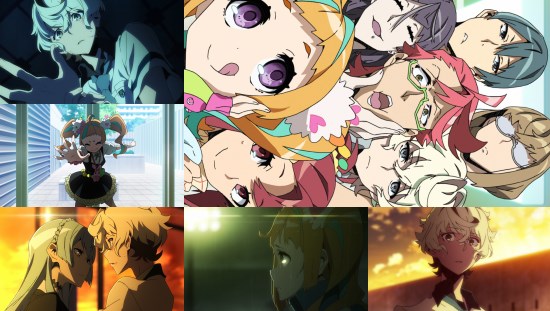 Inconvenient though it might be, pain is an important response by the human body to injury or damage. Imagine, then, a life lived without pain, be it physical or emotional - this is the world of Katsuhira Agata, a teenager who has no fear of being beaten up by bullies because he literally feels nothing during what others would see as an ordeal.

As you might expect, this lack of physical sensation has also manifested itself as a lack of any real emotional connection with others, much to the distress of childhood friend Chidori who is still stuck holding a torch for the person Katsuhira used to be before the personality she once knew faded away. All of this may be about to change however, as the appearance of a mysterious girl named Noriko Sonozaki - who Katsuhira finds himself oddly drawn to - appears and threatens to make a very distinct mark on the summer of a group of classmates in a most unexpected way.

In short, Sonozaki has picked out a group of misfits to take part in a summer long experiment around which the entire city in which they live is built - the so-called "Kizna System", designed to make the world a better place by having all of humanity operate through a share pool of pain and suffering spread across the entire populace. Unsurprisingly, this experiment hasn't gone entirely to plan thus far, leaving those involved needing one final, desperate push to prove its validity.

Against their wishes, this group of classmates who have barely ever so much as spoken to each other are linked into the Kizna System so that they can each share and feel one another's pain, before being set various tasks designed explicitly to bring this pain forth - not just in physical terms, but more importantly in emotional ones. With each member of the group carrying some kind of baggage from their childhood (quickly revealed in most cases as part of the first task they're set), the prospect of coming to understand one another seems impossible, but if anime has taught us anything it's that friendship can blossom in the most unlikely places.

I'm going to be upfront about something here, and it's something that may be obvious from the synopsis above - Kiznaiver's core plot is a heavily contrived one. This probably wouldn't have been an issue were it the stepping stone to build to something unique or otherwise head and shoulders above its peers, but when push comes to shove this is a pretty standard story of friendship, love and everything good and bad that comes with it that has been done better elsewhere. Worst of all, it's been done better elsewhere by the very same writer - Mari Okada also penned the screenplay for last year's Anthem of the Heart, which also takes a group of misfit teenagers and forces them together but does so in a far more natural, pleasing and downright charming way.

What Kiznaiver offers instead is what you might expect of production studio Trigger taking on a similar framework, bringing some madcap irreverence to proceedings throughout the first half of the series but only occasionally hitting the mark in terms of either its entertainment or comedy. There is a soft underbelly beneath all of the shouting and colourful (both literally and figuratively) characters, but all too often the series almost seems too scared to poke at it - one particular story arc revolving around Honoka Maki feels set to provide a big emotional pay-off but then pulls its final punch to leave that particular tale feeling workmanlike but just not quite as satisfactory as it surely could have been. This is an issue that plagues the show to the end - most of its moments of high drama are quickly extinguished, and even its big, tense finale soon peters out into exactly the kind of platitudes that you suspected might have been coming all along. For a series with a premise that should be able to throw around whatever surprises it likes, things are surprisingly sedate once you peek beneath that wacky exterior.

It isn't all bad news for Kiznaiver however. For starters, the show has perhaps the most distinctive set of character designs we've seen from any series this year, and they fit in most pleasingly with a set of individuals who do slowly but surely become more than the broad tropes they begin as for the most part. Not every individual gets quite the same level of care - latecomer to the series Yoshiharu suffers in particular - but the characters that do get their due end up being rather likeable by the end of it all.

The most notable element of Kiznaiver however is its direction, which really comes to the fore over a number of episodes in the second half of the series. At its peak, the show's visuals and presentation are simply sublime - the framing of each shot is impeccable, as is the use of colour and lighting; the animation is striking; even the use of sound and music is bang on the money. It's hard to recommend sitting through half a series just to check out a few episodes for their craft, but if you are interested in the importance of strong direction to make a story more compelling then Kiznaiver is a great piece of research for you once it really hits its stride.

Beyond this, the presentation of Kiznaiver as a whole is decidedly enjoyable - Boom Boom Satellites final single accentuates a glorious kaleidoscopic ending, and Trigger's ability to rain in their kinetic craziness when things get serious is a notable departure for a studio best known for their animated excesses. The soundtrack and voice cast both do their part to deliver the show and its message in a pleasing manner to boot, and the entire endeavour does feel like one that has been lavished with thought and even love for all of its narrative flaws.

When push comes to shove I find myself not wanting to be too harsh on Kiznaiver, and I genuinely don't think it deserves too much scorn poured on it. This is a fantastically well-presented and directed series with a concept that does everything that it intends and proves reasonably entertaining along the way, after all. However, as mentioned there are better examples of a similar story told in a more organic - and ultimately more compelling way - and that's a difficult fact to escape when push comes to shove. Friendship, and the joy and pain borne from it, is of course an important part of the human experience which has no shortage of facets to explore, but beyond its unique starting point Kiznaiver doesn't have anything particularly notable to bring to the table.

You can currently watch Concrete Revolutio in streaming form on Crunchyroll.

6
At its peak Kiznaiver is an impeccably well-directed show, but Trigger's zany outlook and a unique core concept doesn't paper over a series that doesn't bring anything new to the table.
LATEST REVIEWS