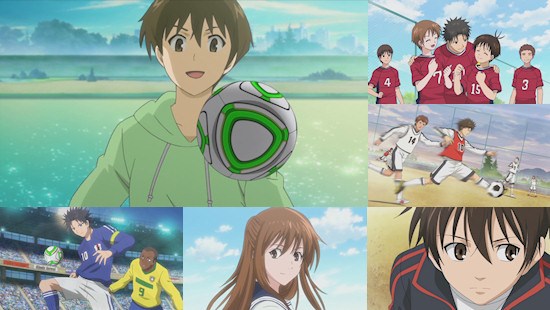 At last, the long-awaited anime adaptation of Knight Rider is here!  Hmmm, what's that?  This isn't the adventures of Michael Knight in animated form?  Oh...

Thankfully, Knight in the Area is the next best thing - a series about the world's (and my own) favourite sport, football - proper football, that is, with a round ball and everything.  With Crunchyroll's previous streaming football series, the excellent Giant Killing, still fresh in my mind, I went into this one with high hopes.

While Giant Killing prided itself largely on its sense of realism, we're thrust into Roy of the Rovers territory right from the start of this particular series as it introduces us to an under-15 game where upcoming Japanese superstar Suguru Aizawa scores a fantastic last-minute equaliser for his country against Brazil.  It isn't, however, Suguru that's the real focus of Knight in the Area - instead, our attention quickly turns to his younger brother, a sibling with a love of football equal to Suguru but without any sense of confidence in his abilities.  So inferior does young Kakeru feel that he's given up playing the game for any team, preferring instead to simply coach and watch from the sidelines as Suguru grabs all of the plaudits and sneak out of his home to play football alone in the park instead.  What's more, Kakeru has a phobia about using his left foot in games, which only serves as a huge disadvantage to this otherwise talented youngster when he takes to the field.

As we progress through the first couple of episodes of Knight in the Area, it seems that nothing will change this status quo - Suguru's attempts to get his brother to open up, start playing football and dealing with his deficiencies all fall upon deaf ears, and even the reappearance of Kakeru's childhood friend "Seven", aka the beautiful Nana Mishima, does nothing to sway him.  It isn't until disaster strikes and tears the Aizawa family apart that Kakeru eventually changes his mind and decides to grab the opportunity set before him by a mixture of his skills and serendipity - the chance to pursue a place as Japan's "knight in the area", and a national hero to boot.

The trouble with this particular setup is that the core of its drama feels wholly contrived before entering the realms of the ridiculous - I don't want to explain in too much detail for risk of spoiling the whole story for anyone who wants to watch the series but its ultimate outcome is eye-rolling daft and worse, it actually robs the story of easily its most interesting character dynamics very early on.  This leaves Nana Mishima in a central role when it comes to developing the show and its story, but to be honest it's one she seems ill-equipped for - as either a love interest or a footballing inspiration she falls a bit flat.

Given my earlier mention of Giant Killing, I really have to mention that the football aspects of the series aren't much cop either - compared to the aforementioned series considered take on tactics, player psychology and the like it's almost a little embarrassing to view Knight in the Area's simplistic and tactically naive view of the game, which in turn shreds any excitement or tension from the rare football-centric moments this early part of the series brings.  On top of it all, the show really struggles to animate the game to any decent degree, relying on lots of speed lines over static shots and incredibly clumsy CG and animation that is jarring more often than not.

If you're not particularly a fan of football but somehow enjoy the travails of sporting drama in anime, then The Knight in the Area might do something for you, but there are plenty of better examples of series which have used sports to better effect in creating human drama and tension.  With bland, "by the numbers" characters, low-budget animation and a story which relies on outlandish scenarios there simply isn't a lot to like here.  There's space for the series to improve as it narrows its focus on Kakeru's passion and goals (with every pun intended), but given the other issues which plague the show at this juncture it's hard to imagine it pulling off the kind of last-gasp victory that makes real-life football so scintillating.

You can currently watch The Knight in the Area in streaming form right here on the UK Anime Network!

3
Poor animation, bland characters and a daft central story leaves The Knight in the Area with little to redeem itself.
LATEST REVIEWS