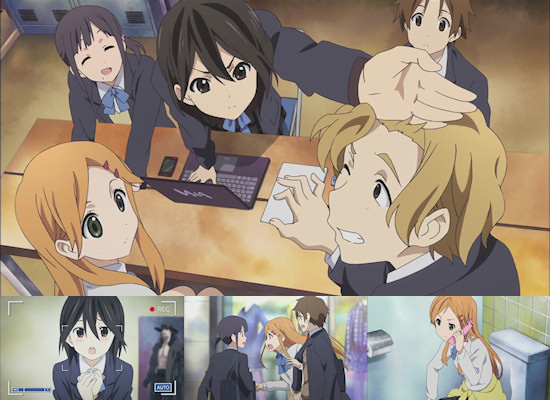 Body swapping has been a common staple in sci-fi for years now, but this summer it’s making its way into anime with Kokoro Connect; this time, the sci-fi element has been sent to its room.

The series follows the story of five high-schoolers (start ticking boxes in the cliché list here) who are the members of the school's so-called "cultural society".  There’s Taichi the nice guy,  Aoki who has an unrequited crush, Iori who is small and very energetic, Himeko the smart and quiet one and Yui who is afraid of men. The story follows them going around school and pretty much exploring various personality traits and possible romances with each other.

What makes this more interesting for everyone is the body-swapping aspect. During the course of these episodes the five protagonists regularly swap bodies with each other at random, which has the potential for causing chaos and mischief as they struggle to try and keep their other friends from noticing and also get in some payback every now and then. The reasons for this are brief and sketchy and basically boil down to "why not?" In fact, after a very brief piece of exposition in the second episode they never mention the reasons why all this is happening again and everyone has very calmly taken it to be matter of fact in short order so that the series can get down to some drama.

The series' main selling point besides the body-swapping twist is that it can be incredibly funny at times – one scene in episode three in particular will have you rolling on the floor! The drama itself, for all its clichés, is engaging and well-thought out too and the animation and character designs are incredibly well done if a little plain.

In fact, the only real niggle with the series thus far is that it very much feels constrained by the need to be friendly to a younger audience at times. Whilst I by no means feel that every series needs to be on a Queen’s Blade level, the lack of any kind of fan service at all bar a brief and still very safe scene in the first ep (which adds in an interesting plot point which the series has then pretty much decided to ignore, which is a shame given that it was being played pretty straight) means that the series never even references the standard tropes of this kind of body-swap story, which is silly given that a group of teenagers not following these is pretty unrealistic. You can’t help but wonder if this series would be better off following in the footsteps of something like Yosuga no Sora, Nana or School Days which showed that you can incorporate a more mature tone into this kind of show as a serious part of the story rather than just being there for cheap titillation.

All in all, if it keeps going in the right direction and allows the characters to develop a bit more then this could well be a great show. If it stays where it is then you still won’t feel like you’ve wasted your time by watching an episode. A solid start.

7
Not leading the pack but a safe bet to make it across the line.
COMMENT AND DISCUSS
blog comments powered by Disqus