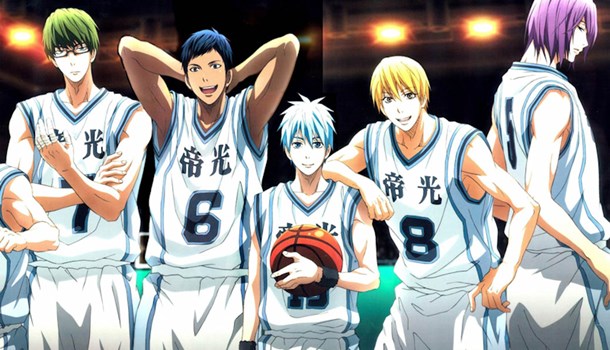 The downtrodden underdogs! The seemingly unbeatable champions! The characters with almost godlike abilities! Yes, it's sports anime time yet again as Kuroko’s Basketball (or to give it its Japanese translation as shown in the opening credits – "The basketball that Kuroko plays") bounces onto Crunchyroll this season.

The story across the first three episodes of this series is everything you’d imagine from such a show, and as such is almost totally forgettable. The basketball team at Serin High School has little hope of becoming champions this year until they manage to recruit the American-schooled Kagami and the unassuming titular character Kuroko, who agree to team up (more or less) to take down Kuroko’s five former team-mates who were known as the "generation of miracles". And that’s it. It’s a paper thin concept and you’ve heard it all before in every sports (or vaguely sports-related) anime from Eyeshield 21 to Saki to Bamboo Blade. The first three episodes take the gang up to a practice game against the first of the miracle players, and it's clearly setting itself up for a long game (so many sports-puns, so little review space). Whilst I couldn’t find confirmation of more than thirteen episodes for this anime adaptation, the original manga is at sixteen volumes at the time of writing so either it’ll be a long show or there’ll be another series planned for the future more than likely.

Rather than the story though, its the characters that keep you interested in this kind of anime and Kuroko’s Basketball fumbles things a bit here because across its first three episodes they only bother to characterise four characters, only two of which are even on the team we’re supposed to be rooting for. Somewhat appropriately, Kuroko himself is a bit of a non-entity, but this makes him pretty much impossible to really like while our other protagonist Kagami is the stereotypical anime hot-head character, but with none of the gags that normally go with them so he’s not much of a likeable fellow either.  Instead, it's left to Rika the team coach to pick up the slack all on her own and you can’t help but feel that if they shifted the series’ focus to her then it would be a lot more fun - she comes across as smart, confident and funny with a rather surprising and refreshing total absence of fan service.

On a brighter note, the production values of the show are pretty stellar - although the character designs are pretty bland, the animation is top-notch which is much less surprising when you realise that this is a Production I.G. show of all things! Their offerings tend to be of very high quality and Kuroko’s Basketball is no exception; beyond the great animation the sound design is excellent, with all the sounds you’d expect to hear present while the voice work is very good too.

Oddly enough, though I’ve been fairly down on the show from what I’ve written I’m going to have to give Kuroko's Basketball a bit of a recommendation because it isn’t bad, it just doesn’t do anything to distinguish itself from the crowd. Its a sports anime; something where you can sit down and stick on a few episodes to pass the time even if you aren’t paying too much attention. As a result of its particular craft, it’ll make you chuckle and each episode will always end at just the right moment to make you want to see the next one.

You can currently watch Kuroko's Basketball in streaming form via Crunchyroll.

7
It's nothing you haven't seen before from other sports anime, but the formula's still fun.