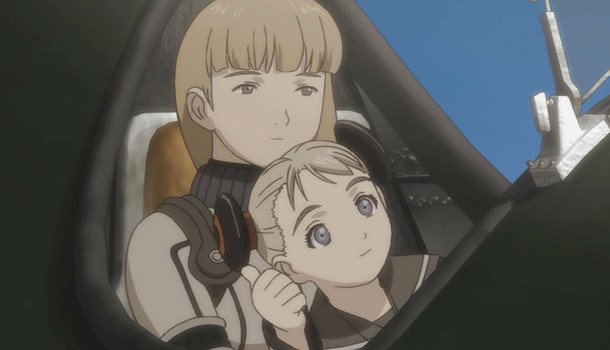 Almost ten or eleven years ago, I found myself on my first proper broadband Internet connection. I hung out on various internet forums and IRC channels, and anime in the UK was just taking off. In those days, companies like Geneon and Pioneer were still around and releasing anime into the US market while ADV Films ruled the roost in the UK. The world of “fan translation” was embracing the digital age and piracy was beginning to bloom. Back then, I encountered a world where roads were not needed, where naval warfare in the sky was the norm, and where the postal service was good, friendly, and certainly a lot more exciting. This was the world of Last Exile and to this day it remains high on my personal list of favourite series.

Alas, for those of us inhabiting our moist island in the Eastern Atlantic, the series faded out of print with the demise of ADV, and the series was long forgotten into the depths of anime community remember. This was true until a sequel to Last Exile surfaced to much accolade in 2012, rekindling fond memories of stories long told. Now we find ourselves with this re-release of an excellent classic series, and its companion Last Exile: Fam, the Silver Wing, in a few months’ time. The question still stands though - since its 2003 release, has Last Exile matured like a good sherry cask whisky, or has it turned to vinegar?

Last Exile is one of those series which starts rather easily, beginning with lifelong childhood friends Klaus Valca and Lavie Head. Together, using their dead father’s vanship (a vanship is a small flying vessel), they courier vital messages across Anatoray and to the military, and in their time off they compete in the local vanship racing league. They aren’t wealthy, but they enjoy their life and job. Life was simple. During a local championship race Klaus and Lavie find themselves the recipients of a unique courier mission - to carry a young girl called Alvis, across the dangerous skies, keeping her from the hands of the Guild, the masters of the skies, and delivering her to the fearsome captain and crew of the kill-em-all battleship Silvana. After landing and delivering Alvis to the Silvana, Klaus and Lavie find themselves quickly assimilated into the Silvana's way of life as their vanship is badly damaged. While on board, they decide to follow the Silvana and her crew of royalty, nobles, privateers and bald perverts on their mission to deal some bloody great hurt against the Guild and the Maestro Delphine, their leader, and to capture the keys to unlock the power to change the world, Exile.

The power to change the world is a topic regularly explored in anime, though rarely does it have such a meaning as it does in the world of Last Exile. Although similar, it becomes evident early on that Last Exile is not set on Earth, or in our history. The people have developed an alternate steampunk-esque technological relationship with the sky, favouring soaring through the clouds, rather than scurrying on the ground. This kind of vertical freedom is all well and good, but only if you have the resources necessary to be able to enjoy it - over the course of the series we see the people of Disith, freezing under a worsening ice age; the citizens of Anatoray, starving and dying of thirst due to failing crops, desertification, heat and drought; and in the middle, lording over them all is the Guild, powerful and all-seeing technological gatekeepers standing in eternal dominion over this world, manipulating and pulling the strings behind the conflicts erupting on the surface of the world for resources for their own ends.

It becomes evident to the people of Anatoray and Disith that the omnipresent Guild are not undefeatable - the forces of the intolerable Maestro Delphine are not invulnerable and that their greatest weapons are not their own battleships, powered by Guild engines and engineers, but the simple vanships. This fight against the oppressive Guild unites one-time enemies, the poor and the noble in a last ditch fight to save themselves from a dying world and to keep the power to change the world, Exile, from those who would mistreat it.

Last Exile is a rare example of a series which follows a single story from a quiet, unsuspecting beginning to a moving crescendo in the final episodes and is my humble opinion, one of the all-time great anime stories. This singular narrative, broken up by the occasional character developing “filler” episodes follows the two main characters, Klaus and Lavie, as they progress from their humble beginnings as couriers, to the saviours of the world - but not without a cost.

I asked earlier if the age of Last Exile showed when compared to more recent series. Forgiving the fact that the series is only in standard definition, is over 10 years old, and was produced by the most marmite of production companies Gonzo, whose quality is best described as “variable”, Last Exile is truly a well-aged single malt and a series worthy of being called a true classic. After seven or eight watches over the last decade the characters, the story and the raw emotion still continue to this day to move me to tears in the closing episodes. Truly, a shining example of anime done right. The artwork is a mix of CG and traditional cel animated backgrounds, techniques used to this day, which continue to give the original Range Murata designs a good punch ensuring that the even with the over-use of the colour grey, the animation and action scenes are full of life.

One advantage of the series being so old is that it was produced back when there was a half decent budget for English dubbing. Because of this, Last Exile’s dub is well worth a listen with the actors giving it their all for the full twenty-six episodes. An excellent dub aside, the series does ship with the original Japanese sound track with subtitles, though this is not quite as good in my opinion. My personal preference for the numerous watches of Last Exile to date is for the dub principally for the voice of Sophia, who is rather sultry, and the Maestro Delphine, whose voice actress is rather exquisite at playing a criminally insane woman.

Last but not least, we have the music. One of my early 2000s obsessions was finding out the name of the vocalist responsible for many of the songs within Last Exile (this was back before it was available easily on Wikipedia!), and I was delighted to discover a few years later that Hitomi Kuroishi, who did a lot of work for the later series, Planetes, was responsible. Her soft and moving voice lends itself well to Last Exile, with the ending song, Over the Sky, being one of her best pieces of work. She continues to produce to this day, with her voice being lent to the sequel series, Fam: The Silver Wing. If you do like her work from Last Exile, I recommend picking up her album “Angel Feather Voice”, which features work from Last Exile as well as from Planetes. It is incredibly easy listening.

Although the UK release is a little less substantial than the historic US release from Geneon (which came in a very nice silver box, complete with a mouse mat and a Alvis figurine) the slim box the seven discs are presented in looks rather cute, although not cute enough for me to surrender my treasured artefact. My only regret is that I wish the series has been left to linger in the licensing ether for so long.

I have tried to maintain impartiality in this review of Last Exile, but I truly believe that the quality of the writing, animation, music, voice acting and the production, is second to none. This is a true masterpiece, and a series to be treasured.

10
A beautiful and moving series, finally available again in the UK.