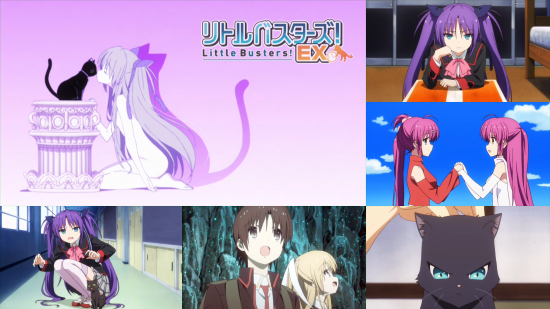 I have a strange suspicion that I am secretly an audio-visual masochist and, I am sorry, but I need to declare a bias. I despise Riki. I hate him. I hate how he is always Mr Nice Guy. I hate how he is an emotional brick wall and is indecisive and leads people on. I hate how he has started a baseball team and he never actually bloody plays baseball.

Little Busters! EX is a series of eight OVA episodes that follow three separate story arcs. The first four episodes follow Saya’s arc from the game, and follows Saya and Riki as they fight inside a fantasy dungeon under the school to defeat a dark enemy. This occurs before the plethora of events that took place in Refrain, but still occurs when Riki actually realises that alternative universes are possible. While I don’t mind Saya as a character, this arc for some reason feels really forced as it takes Riki an absolute age to realise “oh, I kinda like her” and finally make some kind of a move, while all the time Saya is playing the standard tsundere character. I think I now hate Saya too as she plays too heavily into tropes that other truly world class tsundere pull off much better and with fewer trips and falls.

The second arc is the "best girl" route, Sasami and is also the best story in the entire OVA. This story arc involves cats! Specifically, Sasami turns into a cat, and Riki is the only person who can realise her predicament. When the other members of the team realise, they disappear. What a predicament and who is causing this? It all comes down to her childhood, when Sasami had a cat... dying wishes and all that. I actually had a tear during this episode. However it is more the situations where Sasami is with Riki where the amusement lies. Watching a proud girl have to lower herself into eating tins of tuna cat food, beautiful.

Finally, the most confusing story of all. Kanata, the uptight member of the disciplinary committee, gets her claws into Riki. Her route feels... I don’t know, clumsy. I always felt that she was a poor character when compared to her delinquent sister and if anything this story, which is set both before and after the events of Refrain (don’t ask, it's complicated) doesn’t feel quite right to me. The only emotions that I felt during these episodes were “Where is Sasami?” and “Can I have more fun with cats?” Though to be fair, I ask myself those questions a lot. Yes, both of them.

After watching these OVA episodes, if anything I find myself more confused as to what these girls actually see in Riki. Ok, so he is good with cats, but he is utterly useless in a dungeon, and his way of dealing with difficult situations is... well, you saw Refrain.

Does Little Busters continue to fill me with EXcitement? No. Will I Refrain from another innings of this anime? Most likely. I honestly feel that perhaps I am just too old now for these stories. It probably didn’t help that I am an emotionally crippled man in his thirties with issues with emotion, opening up to people, and with experience that being “Mr Nice” like Riki just doesn’t get you anywhere. It doesn’t help that the kind of fantasy that Little Busters portrays is completely unrealistic. The diversity of the character’s personalities and their personal dramas is one of the Key attractions of the series, however I find it hard to believe that these relationships would ever occur, especially in Japan’s school system where going against the grain is discouraged. It is a frustration that I tend to have with most visual novels which, when I played through most of them over a decade ago, their stories might have clicked with me, but now I tend not to connect with the characters at all.

Long story short, I think that Little Busters as a franchise, and this OVA, are probably perfectly fine, but perhaps not for my generation. These OVA episodes finally close out those remaining routes from the visual novel, and while there are some highlights I don’t believe that they really add much to the first series. However, if you are a fan, then just for those middle episodes alone it is worth picking up.

5
A decent collection of episodes for fans of the series, although Sasami needed cat ears. Just saying.
COMMENT AND DISCUSS
blog comments powered by Disqus