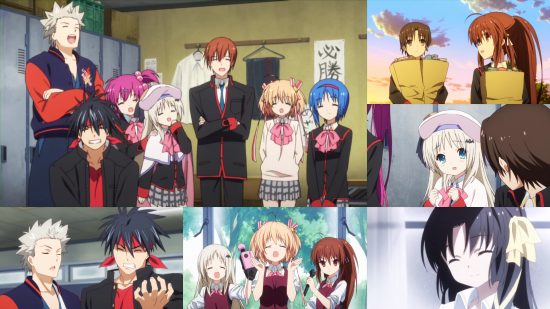 Everything I thought I knew was wrong. I honestly am not sure what was going to happen in this second season of Little Busters but I am certain that what I saw wasn’t it. What was previously a somewhat amusing slice of life series, turned into... well, I don’t actually know.

There were some signs in the first series of Little Busters that something was a bit awry. Riki’s narcolepsy, some small elements of disjointed timelines, the weird cat notes, and some psychological distress that didn't quite add up. At least, until now.

Unfortunately to actually talk about what goes on in Little Busters! Refrain, I need to reveal at least some of these little plot twists.

Plot Twist #1 – A prominent member of the cast can control the actions of the cat who delivers notes to Rin that he authors. This is what leads Rin and Riki to find out the truth behind the world.

This isn’t really a big reveal, as there was always something a bit odd about Rin’s relations with those cats, but there is definitely something odd about the world within which Little Busters is set which Riki begins to realise as Refrain continues and it all turn out that…

Plot Twist #2 – The entire world exists for Riki and Rin to realise that they need to support each other, and to mature together without the Little Busters.

In Refrain, Riki tries repeatedly to form the Little Busters, and finds himself coming up against multiple walls as each member is talked into joining the group once more. However, each member fights against joining as Riki keeps fighting to get back the life he used to have with them. Can’t they just play a bit of baseball and everyone get along? No Riki, they can’t, and the reason for that is the biggest reveal of them all.

This is where I began to question everything. At some point in season one, the Little Busters went on a school trip together. Then from this point on, things got weird, including some cat note action and while we didn’t notice much of this in season one, this event is pivotal to season two.

Without delving any deeper into this pivotal moment and what it represents, I have to say that I'm still a bit... sore, you might say, from how this second season turned out. I don’t understand why the series needed to change from its slice of life tone and why the supernatural got involved. Yes, the entire second series is geared around the requirements to solve someone’s psychological problems. Yes, its overly complicated for some ludicrous reason and yes, it has kind of spoiled Little Busters for me.

All I wanted was some slice of life and baseball. What I got was a hot mess of a story which has simultaneously disconnected all feelings that I had for the characters. I hate to say it, but I honestly think that I was better off not knowing how the series ended. Normally I pray for a good ending, but the only thing that’s worse than having no ending to a story is a badly delivered ending such as this.

This, is after all, just my own personal feelings. I can understand why the writers chose to go down this route.The writing does do a reasonable job of finishing the series, and resolving the hole that they dug themselves into. Riki does manage to become the hero, and the Kyousuke finally gets to leave the story. In that sense, most of the remaining threads are resolved, which is nice. I just wish that it had been done differently.

5
A complete if poor ending to what initially promised to be a simple slice of life school series.