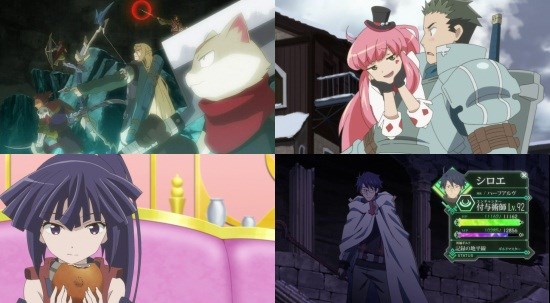 Seven months on from our last foray into the adventures of Shiroe et al, they’re back for the promised sequel series, Log Horizon 2. To quickly recap for those who don’t remember where we left off - the MMORPG Elder Tale had a bit of a glitch when its latest expansion was added, resulting in thousands of players being trapped inside the game world as their characters. With no way out, the players must work out how best to survive in this world without giving in to despair. Chief amongst the players is the Enchanter Shiroe, who decided to set up a council of the Guilds in the game version of Akihabara, where the players must work together to deal with hordes of monsters and the political machinations of both other players and the NPC characters that are now every bit as real as the players. The first season was a bit of a sleeper hit, buried as it was by the advent of Sword Art Online - however, it proved to be a really solid series (and well worth catching up with as season one is presently still available on Crunchyroll), but it’s now to the second season we must turn our gaze and see if the fate of our heroes will be unveiled... I doubt it though as the light novel series is still on-going!

Picking up shortly after the end of season one, we meet up with our heroes as Akihabara is coming down from a massive Halloween event. But, with most of the adventurers in high spirits (though the thought of an oncoming Christmas without the presence of family members is proving a delicate matter for some) there is trouble afoot. The cost of upkeeping Akihabara along with the costs of its events is running unsustainably high, and the city is on the verge of bankruptcy. Intent on solving the problem, Shiroe attempts to barter a loan from the former NPCs who run Elder Tale’s banking system. When the attempt fails due to the bank's strict policy based on tradition, Shiroe hatches a considerably more deadly scheme based on a core RPG tenant – when you kill a monster it drops coins, so therefore there must be someone putting them there and ergo there is a stockpile of gold somewhere ripe for the taking! Unfortunately it looks like the cash is going to involve a high-stakes assault on a hitherto undiscovered raid area, which will require both some new allies and an old enemy...

Despite its early issues, the first season of Log Horizon proved to be brilliant with its intelligent decision to focus on the socio-economic effect the stranded players would have within the world of the game rather than sticking to an all-out action based plot. It was something that really paid off, and thankfully it looks like that’s something that will be continuing here. Whilst the third episode is pretty much one long fight scene the first two episodes are all about setting up the current arc, albeit with the sacrifice of not allowing any time to get back into the swing of the characters; Log Horizon 2 definatly requires you to watch season one – the only real concession thus far is that the plot threads started in the last episode of the first season haven’t been brought into play yet. All your favourites are still around, though a few side characters like Princess Lenessia are very much in the background at present and even Akatsuki is left on the sidelines so far, likely to allow the series time to spend more time setting up the returning minor characters who’ve been elevated to the main cast (at least for this arc) as well as the brilliantly fun healer Tetra who seems to be a definite addition to the cast.

Sadly, Log Horizon has fallen back into a bad habit. Whilst the first season never totally shook off its narrated explanation of basic MMORPG gameplay it was significantly reduced after a few episodes, but here its back in a big way and the first three episodes alone must have a combined fifteen minutes at least of these explanations as the series explains crafting, raids and party dynamics which seems to go on and on. Hopefully this will quickly fall into the background again, as at this point it’s the only real flaw the series has besides the apparent immortality of its characters, which does tend to neuter any action-oriented threats the series comes up with - yes, there’s a consequence to entering into combat, but it comes up far too little to make a real impact.

Elsewhere the animation is still pretty good with a suitably varied selection of character designs, and the series retains the same musical cues (and even the same opening theme) as the original so there isn’t much to criticize there, although at the same time there’s nothing that makes the series stand out alongside more visually sumptuous shows that have also arrived this season.

When a sequel is as direct as this one there’s only one real conclusion that can be drawn unless the series messes-up in some huge way (a moment of silence in memory of Oreimo Season 2 please...) which certainly isn’t the case here. As you may have guessed, that conclusion is – if you liked season one then you’ll like this, as it's more of everything you liked the first time around. If you didn’t like season one or perhaps if you missed out, then perhaps you should take the time to give it another go as it looks like there’s plenty more to come!

You can currently watch Log Horizon in streaming form on Crunchyroll.

7
A great early sign that this is going to be the kind of sequel you hoped for.