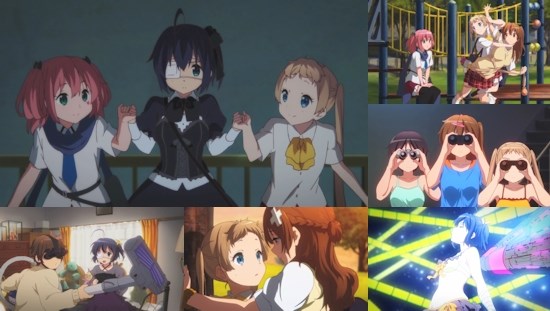 Having enjoyed a fair amount of popularity thanks to the charms of its first season - charms we admittedly weren't particularly won over by - Love, Chunibyo, And Other Delusions (or Chuunibyou demo Koi ga Shitai to use its Japanese title) has since found itself with further opportunities to cater to its fan base. First came a theatrical movie dressed up as a retelling of the first series' events from Rikka's point of view but ultimately little more than a recap film with some new animation, followed by this second season of the series proper, brought to the UK via Animax.

Having seemingly drawn a line over most of its important plot points at the end of its first season, we re-join Yuuta and Rikka to find that their relationship has both changed substantially while not actually moving forward at all - in the first instance, the two of them are now living together after Rikka's decision to move abroad for work, while this has done absolutely nothing to bring them closer as boyfriend and girlfriend, much to the bafflement of all of their friends around them.

This state of affairs is further complicated by the appearance of Satone Shichimiya, another "chunibyou" sufferer and a former close friend of Yuuta's. In spite of both her insistence that her interest in her "hero" Yuuta is as nothing more than that of a friend and her assurances that she isn't going to step on Rikka's toes, it's the centrepiece of some fraught moments for all involved as jealousy and uncertainty becomes the order of the day between the two girls as Yuuta carries on blind to the issues confronting him.

In terms of a central story that's pretty much all there is to be found within the series, which fills the rest of its time with other endeavours such as further exploring the relationship between Nibutani and Dekomori, aided largely by the appearance of a suspicious girl claiming to be the "real" Mori Summer, and a threat to the group's rather unique club that can only be resolved via a napping contest against a rival school. Yes, you did read that last bit right - in the world of this series, school napping clubs are the real deal, and they're serious business to boot.

How much enjoyment you'll glean from Love, Chunibyo, and Other Delusions REN will very much depend upon how much, and what aspects, of the first series you enjoyed. The show's sense of slapstick humour and the comic timing required of it is still in place and the series continues to exhibit the same sense of fun, but on the other hand any sense of emotional drama within the show feels either forced or recycled as it tries to wring more life out of some of the same issues as its predecessor via Satone's addition to the cast. In fairness, this does make for some sweet moments (and if anything Satone's character is hugely underserved in terms of screen time and development for the most part), but there's a sense of "seen it all before" from the constant attempts to pick apart and then re-establish Yuuta and Rikka's relationship.

Ironically, one of the key elements of the series - the idea that some of its characters are mentally grounded in a fantasy world, the title's so-called "chunibyou" - is also something of an issue with the series, as its reliance on jargon and doublespeak is a joke that quickly runs thin and ultimately becomes a frustrating barrier to story progression. In a sense that's the entire point, but it can easily become irksome for the viewer. On the flip side of that, these fantasy worlds do provide Kyoto Animation with an excuse to throw in some ever-more lavish action scenes which often prove to be the visual highlights of an already aesthetically accomplished series that makes good use of the company's now-traditional look and style.

If you're invested in its characters or core concept, then Love, Chunibyo, and Other Delusions REN should provide at least a satisfying viewing experience thanks to a number of funny or touching moments and a mostly lovable cast. Beyond that, there really isn't enough to its story or characters to bring anything fresh to the table here, so if you're hoping for something more substantial to justify a second season or are looking for the series to break the mould set by the first then you're more likely to be left frustrated.

Love, Chunibyou and Other Delusions is available in streaming form from Animax UK.

6
Fans of the first series will find some enjoyment here, but there's little ambition on show for this particular sequel.
LATEST REVIEWS