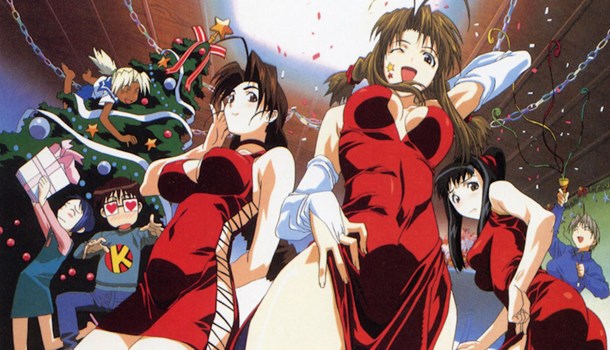 By now, you'll know if you're a Love Hina fan or not. Keitaro's quest for the love of his life Naru has stretched 24 episodes, and so far the interventions of all the other girls at the hot springs, plus at least one misunderstanding per episode, have thwarted his efforts.

That said, things are looking up - it's coming up to Christmas Eve, and this year there's a rumour that confessing or making a wish before midnight will receive a magical blessing, so the race is on for Keitaro to grow a pair and take charge. No, it's not very likely is it?

The Christmas Special is a 45 minute feature that, in common with the series, is beautiful to look at but not exactly complicated. There are a couple of new songs thrown into the mix, but the English voice cast is just as annoyingly twee as it ever was - the subbed version makes proceedings a lot more bearable. I even caught myself smiling at the funnier moments, so as anime comedy goes, it's not too bad.

The storyline is sweet enough, and unusually for an anime romance, it has a resolution of sorts, whilst leaving the door open for the sequel, Love Hina Again, in 2006.

Since 45 minutes is a little scant for £19.99, MVM have thoughtfully placed episode 25 onto the disc as well to add a little weight. Other extras are thin on the ground, with the standard textless opening & ending, and a series of stills in the gallery all that you're getting for Christmas this year.

If you enjoy lightweight, slapstick romantic comedy, and have enjoyed the series to date, you'll enjoy this. For those of you that passed it by the first time around, you're not going to find anything to convert you here.

6
Trite but lovingly presented, fans will love it, everyone else will find it entertaining if not quite a Christmas miracle.