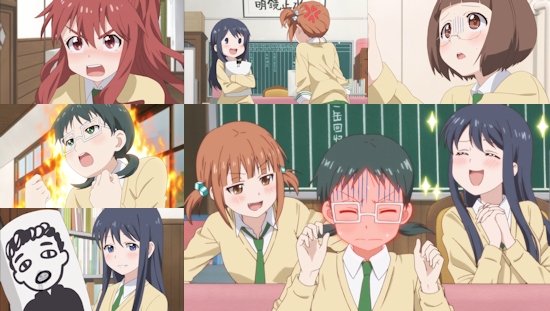 Fujisaki Girls Academy is the kind of prestigious all-girls school you only ever see in anime and manga - an educational establishment filled with prim and proper girls who ooze class and decorum in any given situation. Well, mostly...

Perhaps the most notable exception to this rule is Riko Kurahashi, a tomboy-ish girl who is admired and looked up to by many of the students as a break from the school's norm, to the point where she's earned the nickname of "Wild Kid". As the black sheep of the school, it isn't surprising that Riko is bored - she's well-liked enough, but has nobody she could call a kindred spirit to hang out and spend any time with.

That, however, is about to change, as an errand to take some documents to the student council president - a seemingly perfect and demure girl called Natsuo Maki, but known to the students as "Princess Fuji" - reveals a rather different side to her. To put it simply, Riko walks in on her snogging a hug pillow. Naturally defensive about the whole thing, it's revealed that Maki years to experience and learn about love, and somehow circumstances contrive to leave Maki under the impression that Riko is steeped in the ways of romance.

Before she knows it, and off the back of an ever-expanding tissue of lies, Riko has been announced as the student council president's aide and spends her after-school time participating in Maki's "love lab", trying to teach her senior about romance - something which proves to be rather difficult as Maki's normally calm demeanour seems to go off the rails once she becomes excitable about something. In a school where romantic relationships are forbidden, and where Maki takes pride in her reputation, keeping the love lab secret is key - a more difficult task than it might seem, as other shunned members of the student council are looking for any reason to retake their roles.

In terms of what Love Lab actually does, it has to be said that there's really nothing particularly original about the series - the whole "discovering a girl's embarrassing secret" angle has been so well-used at this point that it's more surprising when a series doesn't use it as its starting point, and of course the larger than life school shenanigan genre is bursting at the seams at this point in time.

So, this is a comedy series that is lacking in originality, but thankfully it more than makes up for this by actually being consistently funny. A lot of this humour comes courtesy of Riko, who has a comeback for everything and serves as an energetic and likeable foil to Maki to craft a very traditional but effective double-act. The addition of other characters to the group threatens to unbalance the enjoyable rapport between this duo, but thankfully the growth in the show's roster doesn't impinge upon the comedy potential, and by episode four we have a full cast of characters who again can hardly be called original in their personality traits but nonetheless work well together to create a whole that is greater than the sum of its parts.

The easy-going sense of comedy that riffs on romantic manga clichés and occasionally knocks upon, it not entirely breaks, the fourth wall, never ceases to be enjoyable and seems to take a lot of its cues from a previous comedy manga adaptation from Dogakobo, YuruYuri - it has the same energy, colourful visuals that provide an enhanced sense of comedy in their own right, and ability to progress a story without letting up on the humour that is the primary reason for watching. Also impressive here is how seamlessly this adaptation works its four-panel manga source material into a coherent narrative in each episode - the constant joins and breaks that often peek through such works are largely invisible here, which also helps to keep things moving at a satisfying pace.

Roll all of this together, and you have yourself a perfectly entertaining comedy - it knows how to get laughs and has a broad enough range of comedy to not become repetitive during these early episodes, and just as importantly it has a cast which bounce off one another in a pleasing (and occasionally downright fantastic) way. Love Lab isn't the kind of series that will leave a huge impact upon you for years to come, but as streaming slice of colourful, undemanding entertainment it provides laughs and smiles aplenty. In short - it's a lot of fun, and sometimes that's all you want from a series.

You can currently watch Love Lab in streaming form on Crunchyroll.

7
It wins no points for originality, but plenty of praise for a strong sense of comedy and fun that makes for a really enjoyable series so far.
COMMENT AND DISCUSS
blog comments powered by Disqus