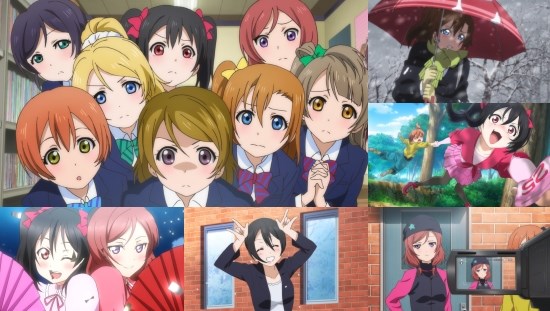 Even with the threat of their school closing down remedied, the Idol Research Club at Otonokizaka Academy have no time to rest. Having missed out on the premiere event, they jump at the chance to participate in the second Love Live, a nationwide talent contest for groups of School Idols. The clock is ticking as they get their act in order, face up to possible rivals, and come to terms with what may be the eventual, unavoidable end of their idol activities together as μ’s.

This new season of Love Live has clearly learned from the first one, which I previously reviewed here. This time around our group of dysfunctional wannabe idols have a clear goal in mind and, barring a few missteps along the way, drive full speed ahead towards it, which is a great improvement from the constant shifting in the first season. This allows both drama and comedy to naturally spring forth, giving the audience the space to fall in love with the cast all over again. The first half of the series is chock-a-block with memorable moments, putting the focus on individual characters while also exploring the group as a whole and all the various interrelations between the cast. You get some great moments including jailbreaking, adorable family drama, a diet-busting conspiracy born of grunting and pointing, and more besides. But all is not quite well, sadly. A bizarre dichotomy exists in how the show handles its individual storylines - goofy, comedic storylines are great fun and surprisingly earnest (heartfelt, even) but whenever the show attempts to introduce some drama it feels oppressive and forced. The cadence of the show in these dramatic points is often so heavy-handed and demanding that it immediately disengages you from the show and leaves you out in the cold, rolling your eyes at the overblown events taking place on screen. This loss of suspension of disbelief really hurts the show and much like in the first season it becomes painfully clear in these moments how intent the show is on selling you its wider brand.

Sadly the series still cannot handle the concept of executing on a storyline as it constantly cheats you out of it, particularly in the second half as things rush towards an artificial, forced-feeling conclusion. Resolutions to obstacles or challenges that the show has carefully set up and got you invested in occur off-screen, with the series skipping ahead as if nothing of consequence had happened and then weakly filling the result in later. While this is a valid technique to apply, the direction in the show is simply not up to the task, and the constant thwarting of resolutions left me feeling emotionally flat as a result. This inability to provide any conclusion to its events is poorly partnered with an unflinching desire to close the franchise down by the end of the 13-episode season. This is particularly irksome as the series undergoes a number of lengthy timeskips, jumping months at a time to force feed you contrived plot events when I’d rather goof around with the cast instead. The show then has the cheek to undo the finality of the ending at the very last moment to shoe-horn in a hook that would later link into the Love Live movie. There needed to be more episodes in this series, honestly - with a proper overarching storyline finally in place it had created acres of space for great, endearing adventures only to once again hamstring itself.

For a series about a pop group it feels weird that the main part of the audio I want to praise is the background music. The soundtrack is surprisingly effective at getting a reaction out of you, and provides a level of gravity to dramatic scenes that does a lot of work to overcome the deficiencies in the writing. The idol songs themselves are present and correct, although it would be nice if there were more of μ’s discography present as there is a shockingly wide breadth of it available! The one bonus that this season has is that it includes a full version of Snow Halation, which is to my mind the singular μ’s track that is agreed upon as being actually good and has a wider appreciation even outside of fan circles. Oh, and yes, the series still maintains that absurd comedic guitar twang sound effect from the first season.

This series release also comes with an English dub. It’s serviceable but the main cast members all sound very similar to one another, which makes it a dull listening experience. Notably, all the songs are left in Japanese and subtitled for the dub.

This series of Love Live looks much like the first in terms of visuals, both for good and ill. You still have the lavishly drawn backdrops, fluid characters, and the ropey-as-heck CG. The CG appears more often in the dance numbers, and the show still insists between cutting back and forth between wonderfully dynamic drawn characters and the creepily sterile PVC figure target render versions. The CG does pull its weight a little more in depicting the stages for the song-and-dance numbers, although the more energetic versions of these are let down by the release format itself...

The DVD version of this release that we were provided for review is an un utter technical disaster. The video quality is generally average, however whenever there is action (especially dancing) on-screen the picture turns into an atrocious compressed mess. This issue crops up multiple times during the series, both during normal action scenes and also during the massive CG-laced dance numbers. It utterly rips you out of the experience and is a gross thing to see. (Our editor-in-chief, who received an early copy of the Blu-ray version of the release, reports no such issues on that format although I am not personally able to directly compare them)

A more consistent issue is the subtitles. The lettering itself is in a grainy, coarse-bordered font which is hard to read, especially from a distance. While it becomes slightly easier to read with time, this is an unwelcome imposition that negatively effects the viewing experience.

Season 2 of Love Live is improved from the first, but is still an infuriatingly self-thwarting package of wasted potential due to a bizarre and unnecessary desire to retire its lead characters. The cast is great, the light-hearted moments are great, but whenever the series takes a turn for the dramatic it becomes as palatable as a lead potato. Plus, as a final note, If you do want to pick up this release, please don’t buy the DVD version as it is fraught with previously discussed issues that will directly impact your enjoyment.