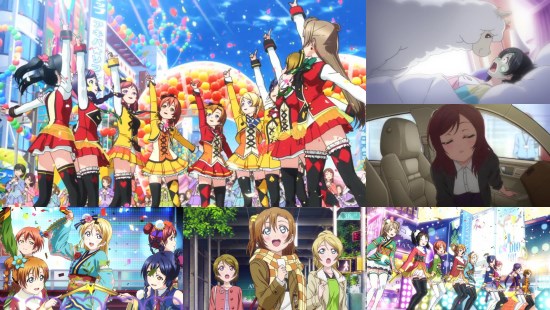 Anime revolving around idols isn't exactly a new concept, but even in this current time where every series seems determined to shoehorn an idol or twelve into it nothing has managed to touch the marketing behemoth that Love Live has become. After two hugely successful seasons, it's no surprise that creators of the franchise, Sunrise, want to keep that gravy train moving, but before we move on to a whole new cast in the form of Love Live! Sunshine there's still time for μ's to perform their swansong - and on the big screen no less.

Having resolved to disband their school idol group once the three seniors within it graduate, you'd be forgiven for expecting a slow ramping down of their activities. However, their victory in the previous Love Live means that they remain a hot property, and with ambitious plans afoot to bring its next event to the massive Akiba Dome all eyes turn to μ's to promote the Love Live concept and bring it to a wider audience.

If you want to massively increase interest in an event, there's only one place to turn of course - America. Thus, it's off to New York we fly as our nine-girl idol group serve as ambassadors for the Love Live brand in New York, preparing for a concert that will - they hope - take the next Love Live's popularity into the stratosphere. Of course, being a Japanese idol in New York isn't easy (they don't drink coffee they'll take rice, my dear), and language barriers and a lack of familiarity with their surroundings offers plenty of excuses for comedy and some fraught moment for Honoka in particular until their task is finally completed.

If you expected the majority of the film to take place in the Big Apple then thing again, as we soon return to Japan to see the fruits of the girls' labours for ourselves - Love Live filling the Akiba Dome is now guaranteed, but the new-found popularity of μ's ensures that questions resurface as to what the future should hold for the group.

Having wrapped everything up pretty neatly within the confines of its second series, it's a surprise to nobody that The School Idol Movie is a trifle in narrative terms - what emotional drama it has is mostly a low-key and slightly forced re-tread of that second season and the "will they, won't they?" future of μ's with a rather strange twist or two in tow.

This leaves the rest of the film free to pander to its audience in the nicest possible way, with a never ending cavalcade of setups, jokes and moments designed to give each member of the core cast - and much of the extended cast - some moments for fans of each individual to lap up. How deep that drive to give the fans what they want is actually the most impressive facet of the film, showing how closely those involved have clearly been monitoring its fandom and harking back to the interactivity on-hand early in the Love Live project as its early fans were allowed to choose group names via public votes.

If you aren't knee-deep (Nico Nico-nii deep?) in Love Live fandom, a lot of this will pass you by - if you don't care about which characters fans "ship" with one another or moments from the series that blew up into oft-used images online, then there are plenty of jokes and call-backs which will fly over your head entirely, and stripped of those kind of references you're left with a pretty mediocre film if we're honest. Assuming you've been lapping up both the series so far and online conversations surrounding it however you'll be in your element, and there's something satisfying about seeing the creators of this film proving themselves to be so precisely in sync with its fan base.

One area where the film is a little disappointing is visually - if you're expecting a big, grandiose upgrade to how this big screen treatment looks compared to the TV series then you'll feel somewhat let down, as there's little to no real improvement in The School Idol Movie's animation for the most part, save for some of the pain-staking care taken in its depiction of New York. This also filters through to the movie's use of CG for much of its song and dance numbers - as per the TV show, the switches between 3D CG and traditional animation remains jarring, and although the big musical numbers are perhaps a step-up from what we've seen before any improvements in this regard are only minor.

Of course, another of Love Live's big draws is its music, and your take on this aspect of the film will depend on what tickles your fancy. As always, the franchise's repertoire proves to be impressively versatile, and although none of the songs stuck in my head for longer than about thirty seconds it didn't feel like there were any duds on show, and the music video "packages" surrounding all of these numbers were enjoyable in spite of the animation issues we've noted.

Trying to sum up Love Live! The School Idol Movie in one easy to digest paragraph of review score is a truly difficult one, as your enjoyment of the film will depend entirely upon how heavily invested you've been in the franchise to date. If you're a hardcore Love Liver, there's no doubt that this film has been made for you - I don't need to tell you to enjoy this final outing with your favourite characters and all of the nods and winks it aims at the viewer while it follows them. More casual Love Live fans will probably have a good time but will also be missing a layer of its meta-humour which undoubtedly reduces its overall effectiveness as a result, while those who have no grounding in the TV series will, frankly, be left wondering what all the fuss is about.

That leaves us with the ultimate question of whether a film so specifically targeted towards a particular audience can be labelled as "good". Much like the Steins;Gate movie we saw at Scotland Loves Anime a couple of years ago, the School Idol Movie is a work of utter fan service in the purest sense - a reward (and opportunity to siphon more money from) its most devoted fans and a film that achieves everything that it sets out to, but as a result also a movie that will have little appeal to anyone outside of that very specific bubble.

7
A funny and hugely entertaining film for dyed in the wool Love Live fans, but a forgettable trifle for those not heavily invested in its cast.
LATEST REVIEWS