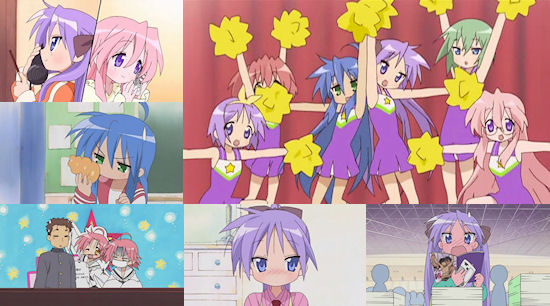 For as long as I've been involved with UK Anime, one series has been guaranteed to crop up in every single industry panel or question and answer session I've covered, and every forum topic about series readers would like to see licensed in the UK.  Heck, I've even pushed to see this show hit our shores on occasion myself.  That series is, of course, Lucky Star, a series that could probably proclaim itself as "the Marmite of anime" if it so wished, and a show that you'll soon be able to make your own mind up about via Beez Entertainment's Anime Legends release of the entire series, OVA included.

While most slice of life anime derives its humour from (as the genre suggests) every-day happenings, Lucky Star's comedy can broadly be split into two camps.   On the one hand, you have plenty of observational comedy along the lines of that more traditional definition of "slice of life", taking in facets of life and Japanese culture with an inquisitive, slanted twist.  While this side of Lucky Star's humour is pretty much universal (give or take some knowledge of Japanese culture), the series also traverses a heavy line of otaku-centric humour, with constant references to other anime series (particularly but not exclusively other shows produced by Kyoto Animation), manga, gaming and so forth.  In the already hit-and-miss world of anime comedy, and particularly comedy series derived from four-panel manga such as this one, such references are effectively black and white as to whether you "get" them or not.  Put simply, unless you have at least a few years of experience of watching anime and immersing yourself in the culture which surrounds it, your chances of deriving humour from Lucky Star is drastically reduced.  Put even more simply, if my referencing the phrase "uguu~" leaves you with nothing but a blank, confused stare, or if you can't appreciate the implicit joke in the show's lead character Konata Izumi cosplaying as Haruhi Suzumiya, then Lucky Star might well not be the anime comedy for you.

Assuming you've passed that barrier to entry, then you'll find yourself watching a generally likeable comedy that might not always have you in stitches with laughter, but frequently at least leaves you with a smile on your face or nodding in recognition that a particular comment has nailed either your own behaviour or that of someone you know spot on.  It's seemingly ever-increasing roster of characters from an initial quartet of regulars all belong to recognisable, well-worn anime tropes, but even this is in turn used and played upon by the series as a vein of humour; Kagami Hiiragi's tsundere proclivities in particular are built into a never-ending stand-up comedy act between herself and Konata to great effect.  On that topic, the very fact that Lucky Star discusses the role of the word "tsundere" and its changing meaning in recent times at one point probably tells you just how deeply the show likes to drill into otaku culture.

While comedy is Lucky Star's unswerving central focus, that doesn't stop the series from occasionally dipping into other elements quite beautifully - there's one touching and poignant episode segment regarding Konata's deceased mother, while a school trip where Kagami receives a letter which she assumes is a pre-cursor to a confession of love is also wonderfully played, leading up to the series finale (OVA instalment aside) and the kind of Japanese affirmation that your school days should be the best of your life that is so common in this kind of show.

To be honest, trying to review Lucky Star is a slightly stressful proposition - some people will pick up this series on my recommendation and absolutely hate it regardless of their knowledge of anime culture, while others might steer clear from a show that they might actually thoroughly enjoy because they don't feel sufficiently "qualified".  It's the kind of anime that really do with a "taste test" of some kind to try before you buy, but in lieu of that option I think our "uguu~ test" is about as good as it gets.

Personally, I'd say that the time is ripe for sufficiently "otaku aware" anime fans to pick up this particular comedy series - a few more years down the line the objects of his humour may start to lose relevance, and with six DVDs and twenty-five episodes for under £30 if you shop around you'll get a lot of entertainment for your money, even if this Anime Legends release could do with a booklet of translation notes to aid your understanding of the show's cultural references.

Love it or hate it, Lucky Star is a key inflection point in the progression of comedy anime that follows in the footsteps of Azumanga Daioh while subsequently spawning a slew of "copycat" manga, novels and anime in Japan - the fact that few (if any) of those efforts have managed to either match Lucky Star's popularity or prove as quotable as this series probably tells you all that you need to know.

Given how many of you have been asking for this show to be licensed in the UK for years and years (and yes, I include myself in that number), it's only right that you go out and buy a copy as soon as you can if you are amongst them.  In fact, you should probably buy three copies - one to watch, one to keep in mint condition and one to lend to your friends to "spread the gospel"...

English and Japanese audio with English subtitles.  Extras across the discs in this set include key scene galleries, textless opening credits with lyrics, voice actor interviews, original promotional clips and The Adventures or Minoru Shiraishi featurettes.

8
You'll either love this Marmite anime or hate it dependant on your taste in comedy and how many of its references you get. If you fit the right profile, this is an entertaining and frequently funny slice of otaku life.
COMMENT AND DISCUSS
blog comments powered by Disqus