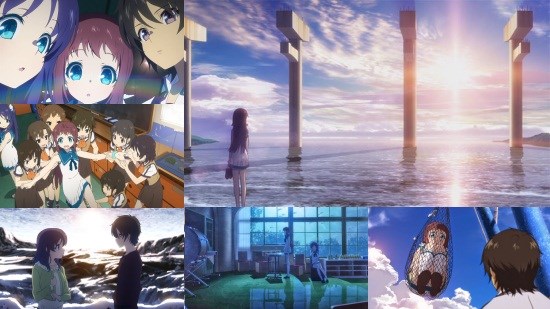 Somewheeeerrrre beyond the sea, she’s thereeeeeeee waitin’ for meeeeeeee.......(Sorry, couldn’t resist). It’s rare that you get to review a series that people get as passionate about as A Lull in the Sea. But between our hugely positive reviews (under its Japanese title Nagi no Asukara which it streamed under) and the people who were getting so excited by the release that I was getting messages on social media when people found out I had the review discs in hand, well, suffice it to say that I was left with pretty high expectations that this show would be something special and not just some fishy story.

Our setting is a rural, coastal fishing village in Japan. Whilst we’re more-or-less in the present day, modern technology hasn’t really caught on in the village so there’s no real computer presence and things are of a simple, laid-back nature. Off the coast lies Shioshishio, an underwater village populated by seemingly normal people able to live and breathe underwater thanks to a blessing of the sea god called Ena. Whilst the relationship between the land and sea dwelling folk has traditionally been a fairly symbiotic one, things have become much more tense and strained of late, and our story follows four children from Shioshishio whose school has closed and must now attend school on the land. Here they must face up to prejudices - not just that of the land dwellers but also their own - and learn to get along with their new peers.

First things first – despite the school setting this is not the kind of comedy/harem/school club show you might be expecting. There’s a little comedy, a little action here and there and even a little fan service, but the series is aiming for something much more subtle. You could perhaps get away with classifying it as a romantic drama but even then you’d be doing it a disservice, as whilst there are romantic elements which play an important role in the plot these aren’t really the series' strongest points, and A Lull in the Sea tends to be a bit ham-fisted when dealing with them. In fact, this series is a pure drama which wants to focus almost entirely on its surprisingly complex themes of change and how it affects us even though we often wish for things to stay as they have always been. This idea permeates every event that happens throughout the series as we follow the four leads and a large supporting cast through all manner of events, from festivals to weddings to cursed body parts. The theme does a huge amount of work and as a result every episode is so densely packed with strong character moments that it rivals live action dramas with twice the run time.

The series itself is utterly beautiful visually - P.A. Works have outdone themselves here with some fluid and graceful character animation. The real stars however are the backgrounds and lighting effects, both of which are incredible. The background work in particular is just amazingly detailed and realistic. The main village effortlessly evokes the feeling of a true coastal town, not merely through the presence of the large ocean next to it but also by making the environments look lived-in – it’s a working village that’s been around for years and time has faded paintwork while metal has been worn down and rusted by salt. Dip below the waves and the ocean is an amazing world of sea life lit by the diffused light of the sun and the eerie spirit fire produced by the sea god. Like the surface world Shioshishio is an old village, aged not by wind and salt but by sea life and encroaching seaweed and coral. You could take almost any frame and hang it on your wall - it really is that good.

The music is a mixed bag, though you’re sure to find a favourite amongst the five opening and ending themes and a few pieces of background music prove to be highly effective. The American cast tries their best for the dub but really there’s only so many times you can hear them mangle Manaka into Monica before you need them to stop and go away; fortunately the Japanese cast does a spectacular job with big shout-outs going to Ai Kayano (No Game No Life’s Shiro) as Chisaki and Mikako Komatsu (Bodacious Space Pirates’ Mariko) as Miuna who really go all-out here.

All this being said though, A Lull in the Sea is sadly not a perfect show. The writing often tends to bow away from the more complex and interesting intricacies of its storyline to focus on the relationship between Hikari and Manaka which, despite the series best efforts, remains the most dull and predictable arc of the series with the least emotional investment. In particularm this has a big impact at the half-way point of the series – it’s not too much of a spoiler to say that there’s a time skip between the two halves of the series, but sadly the series chooses to have everything that occurs within that period explained away in a few short flashbacks during episode fourteen despite there being enough content to fill done another half season covering it. Chisaki in particular suffers because of this as it’s her character that would have most benefitted from more detail of the intervening time, especially in light of the fact that whilst her storyline is arguably the most interesting it’s also pushed to the sidelines, giving it a much slower development that you might wish for.

The writers also have an annoying habit of taking the easy way out when they write themselves into corners – characters in peril either escape unscathed with no explanation as to how they could possibly have done so or are saved by some magical occurrence for no apparent reason other than to have the character be saved (deus ex Ena?) The series does have a bit of a touch-and-go relationship with physics which can be distracting as well at certain points too, particularly when we’re in the watery world of Shioshishio. For instance, how do people walk along the road without floating off (or indeed their clothes and hair billowing around)? For that matter why are there roads underwater anyway when you can swim wherever you want? How does soup stay in the bowl and how on earth do you go to the toilet? It doesn’t spoil the show per se, but it’s just in your face for many scenes when a quick throwaway line or two could probably have dealt with the problem (although it wouldn’t explain why the sea god keeps stealing peoples clothes...)

One issue that isn’t the series fault though is MVM Entertainment’s frankly bizarre release schedule - you can get part one on DVD only on August 3rd, part two on DVD only from September 7th, then the complete series in an extras-packed Blu-ray edition on September 21st. Oh, and part one on DVD has episode 14 as a special feature or some reason even though it’s also still included in part two, so you’ll have that one twice. To note, we've reviewed the entire series (i.e. both parts one and two) on DVD here, but we'll be taking a look at that Blu-ray Premium Edition in due course closer to its release.

Despite these issues though I found that I enjoyed A Lull in the Sea. It’s a rich, character-led drama set in a wonderfully realised world. The series isn’t going to be everyone’s cup of tea but if you’ve a hankering for a UK release of something that’s not the usual action or comedy style show then you likely won’t regret casting your line in.

English and Japanese stereo audio with English subtitles. Extras across these two volumes on DVD consist of clean opening and ending credits, and trailers. Part one also contains episode 14 as a "bonus episode" to lead into part two of the show's DVD release.